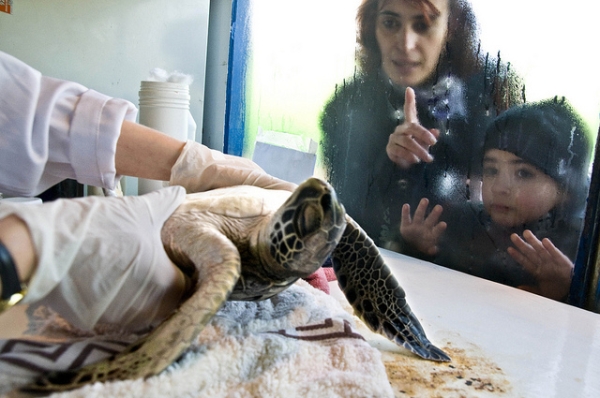 A boy and his mother watch through glass as a green sea turtle receives treatment at the Karumbé rehabilitation center. Credit: Victoria Rodríguez/IPS

MONTEVIDEO, Jul 24 2012 (IPS) - A record number of sea turtles are turning up on Uruguayan beaches along the Atlantic Ocean and Río de la Plata this Southern hemisphere winter, suffering from cold shock and hypothermia.

While specialists are still investigating the causes, they speculate that an abrupt change in sea temperature may have prevented the green sea turtles (Chelonia mydas) from migrating to warmer waters.

At press time, close to 100 turtles found on the beaches of Uruguay’s southern and eastern coast had been taken to marine rescue centers.

The green sea turtle, classified as an endangered species by the International Union for Conservation of Nature (IUCN), normally grows and develops on the coasts of Uruguay and then migrates to Brazil in the winter in search of warmer waters.

The turtles are commonly spotted on the rocky points along the Atlantic coast in the departments (provinces) of Rocha and Maldonado, although they can also be found on the beaches along the Rio de La Plata or River Plate, a wide estuary that flows into the sea.

Adult specimens can grow to up to a meter and a half in length and weigh up to 500 kilograms. But the green sea turtles that visit the coasts of Uruguay are juveniles, measuring around 40 centimeters in length.

“There have been records in the past of beached turtles due to cold winter temperatures, but the average was around 10 turtles during the entire winter,” Andrés Estrades, a specialist at the Karumbé sea turtle center, told Tierramérica *. “We had never reached such a high number before, and the cold weather has only just begun.”

Karumbé (which means turtle in the Guaraní indigenous language) was born in 1999 as an initiative undertaken by a group of young researchers, students, biologists and veterinarians, aimed at the conservation of Uruguay’s marine species, with a special emphasis on the study of turtles.

A Karumbé turtle rehabilitation center and a small museum are located on the grounds of the Villa Dolores Zoo in Montevideo.

So far this winter, the center has taken in 32 rescued turtles, young specimens between the ages of two and 12 years and weighing between four and 15 kilograms, said Estrades. A team of Karumbé volunteers is working hard to diagnose their condition and help them to recover.

The rest of the roughly 100 rescued turtles have been distributed among similar centers in Rocha and Maldonado, and around 20 have been discovered dead.

According to Karumbé, an average of 120 sea turtles are found beached in Uruguay every year. Half of them have swallowed plastic objects, 15 percent have become entangled in garbage or fishing nets, another 15 percent are suffering from cold shock, and the remainder are victims of different diseases.

Karumbé has launched an information and awareness campaign on Facebook, in order to explain to the public what they should do if they find a sea turtle stranded on the beach. The main recommendations are to not return the turtles to the water, to keep them warm with blankets or warm water, and to contact the specialists.

On Jul. 16, 50 specimens had appeared in a period of just three days. At the Karumbé center in Montevideo, two foreign students were working as volunteers alongside veterinarian Virginia Ferrando to treat them.

The pools and tanks could not hold the large number of turtles arriving, and the heaters were also unable to keep the water temperature high enough. Visitors to the zoo – of whom there were many, since it was the second week of school vacation – were met with the surprise of a rehabilitation center full of action and overflowing with turtles.

Two youngsters who had come to deliver a rescued turtle observed the process: first the turtle was placed in a pool of warm water, and then it was examined in order to make a diagnosis.

“Some of them are already doing quite well and with a bit of liquid feed and heat they can fully recover,” Ferrando told Tierramérica. The turtles are also being studied to determine if they had contracted some sort of disease before they were beached.

“Most of them appear to be in good physical condition. We have 32 at the center, and half of them are floating, which means they have some other problem, like pneumonia, a viral infection or plastic in their intestines. We are assessing them, and this will require more work,” said Estrades.

The turtles will have to remain at Karumbé until spring, when the weather conditions are adequate for them to be released back into the sea.

“Every turtle we release is an event. We would like to acquire some satellite monitoring equipment to see if we are doing things right,” he added.

Karumbé, which is represented on the board of directors of the International Sea Turtle Society, is participating in a doctoral thesis study through an agreement with the Federal University of Rio Grande do Sul, Brazil. Gustavo Martinez, a Brazilian researcher, is studying the year-round permanence and seasonal migration of sea turtles on the Uruguayan coasts and their movements to Brazil.

“Many of them migrate, but others stay,” explained Estrades.

One hypothesis regarding the large number of beached turtles this year is that the specimens that had travelled farther inland along the Río de Plata did not make it back to the ocean in time, “and when the water temperature dropped suddenly, they went into cold shock,” he said.

The sea water temperature is currently 10 degrees. While this is not a record low temperature, it is below the average for this time of year, which is 12 degrees. According to Estrades, this difference could be fatal for some turtles.

“We are seeing changing trends in maximum and minimum temperatures, possibly due to climate change. We had a rather warm autumn, and winter arrived very suddenly. This might have disoriented the turtles,” he said.

The specialists have also observed “a sort of tropicalization of the Uruguayan coast: the water is becoming increasingly warmer, and animals that are unusual for this region are appearing.” One example is the hawksbill sea turtle, for which there were no previous records of sightings in Uruguayan waters.

The hawksbill sea turtle commonly inhabits the warmer waters off the coast of Brazil, but in 2007, a specimen turned up in Uruguay, followed by a number of others in the following years. In 2011, six of them were found, “all of them very weak and full of plastic,” said Estrades.