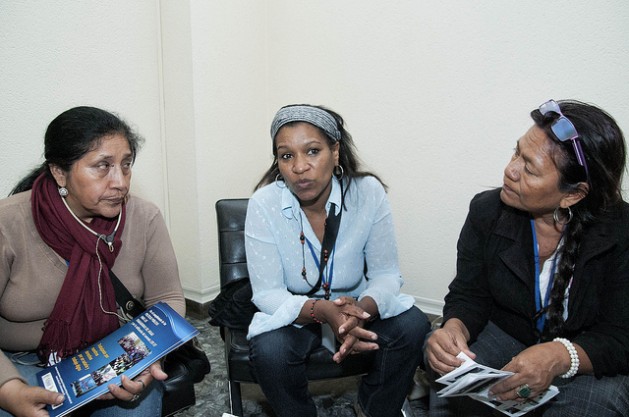 MONTEVIDEO, Oct 29 2013 (IPS) - “We have come together to join forces, to be heard, because we want to speak for ourselves,” said Ernestina Ochoa, a Peruvian domestic worker, at the close of the founding congress of the International Domestic Workers Federation in the Uruguayan capital.

Uruguay was chosen to host the Oct. 26-28 meeting because it was the first country to ratify Convention 189 of the International Labour Organisation (ILO), which establishes basic labour rights that the great majority of domestics around the world do not enjoy. The congress was attended by union leaders from more than 50 countries.

But even in Uruguay or other Latin American countries with ground-breaking national laws aimed at protecting domestic workers, enforcement is a major problem. And in Asia and the Middle East, the situation is much more critical.

“For many years only non-governmental organisations spoke for us, through studies and research…but we domestic employees and our unions have done the day-to-day hard slogging,” said Ochoa, vice president of the International Domestic Workers Network (IDWN), which changed its name to Federation at the congress.

“Now we have said ‘enough’s enough’, let’s found a large federation that unites us, let’s work together to organise ourselves, defend our rights, create unions, improve the laws and help countries where there are no laws, empower domestic workers, train leaders and have a voice vis-à-vis governments and employers,” she said in an interview with IPS.

The IDWN was founded after the first global congress of domestic workers was held in 2006 in Amsterdam. The umbrella organisation, which currently has member unions in 87 countries, was established to fight for the adoption of ILO Convention No.189 on Decent Work for Domestic Workers (C189), which went into effect in September.

Map of progress made by domestic workers. Credit: Courtesy of Human Rights Watch (click to enlarge)

At that time, Ochoa said, they had no idea how much they would grow. She said it had become necessary to create a federation to achieve independence, especially in negotiations with global institutions.

Progress has been made in many Latin American countries, such as Uruguay. But most countries in the world do not have legislation on domestic workers, the Peruvian trade unionist lamented.

C189 establishes “the first global standards for the more than 50 million domestic workers worldwide – the majority of whom are women and girls, and many of whom are migrants,” says the report “Claiming Rights: Domestic Workers’ Movements and Global Advances for Labour Reform”, presented at the congress in Montevideo.

“According to the ILO, almost 30 percent of the world’s domestic workers are employed in countries where they are completely excluded from national labour laws,” adds the study published jointly by the IDWN, the International Trade Union Confederation (ITUC), and Human Rights Watch.

The report says live-in domestic workers, girls and migrants face a heightened risk of abuse. And while child labour declined in other sectors, child domestic labour actually grew by nine percent from 2008 to 2012.

And she told IPS that while advances have been made in Latin America, the challenge in this region is in translating the new legislation into actual improvements in the lives of domestic workers.

The basic rights established by the C189 include weekly days off, limits to hours of work, a minimum wage, overtime compensation, and social security.

The report also notes that the Philippines, as well as Argentina, Brazil, Kenya, Spain and Venezuela, which have not yet ratified the convention, adopted labour reforms that protect domestic workers.

Graciela Espinoza, with the Uruguayan union of domestic workers, STUD, said “we still have to put our house in order,” referring to her country, despite the adoption of a law on domestic labour, the ratification of C189, and three collective bargaining agreements negotiated with employers.

“There have been many improvements,” Espinoza told IPS. “But there are still domestics who are not officially recognised as workers, and until they are, we have to continue fighting.

“The day society as a whole recognises our work as domestic employees will be the day when we can say: we have reached one goal, now we have to move on towards the next.”

The trade unionist said the most significant changes have been seen since 2006, when a law on domestic labour went into effect, and especially in 2008, when the first national collective bargaining agreement was signed. “That was when the revolution happened in Uruguay,” Espinoza said.

The proportion of domestic workers registered in Uruguay’s social security system climbed from 32 percent in 2004 to 66 percent today. And over half of the registered domestics have labour accident insurance.

Her colleague Lucía Gándara said that “even though Uruguay was the first to ratify C189, rights here are violated, including the right to organise,” which protects labour activists from being fired or abused by their employers because of their trade union activity.

“Domestic workers who form part of the STUD secretariat cannot attend meetings if they are held during their working hours, because they are fired,” Gándara said.

As Espinoza explained, “we work in isolation from each other, a situation that works against us as a union; for example we cannot carry out an occupation of a building – we can’t occupy a family’s house – as a protest measure.”

“The most we can do is explain to the employer the rights and duties of domestics, and that’s what we’re doing. In these cases, the domestics sometimes continue working, and in others they’re fired,” she said.

Despite the lingering problems faced by domestics here, Paulina Nuza, a member of Peru’s Training Centre for Domestic Workers (CCTH), told IPS that “Uruguay is a model.”

“Domestic workers in Peru do not earn decent wages and do not have the same conditions as other workers,” she said. “Although there is a gender equality plan that says that 50 percent of the one million domestic workers in the country are to be insured by 2017, not even six percent of us are currently insured.”