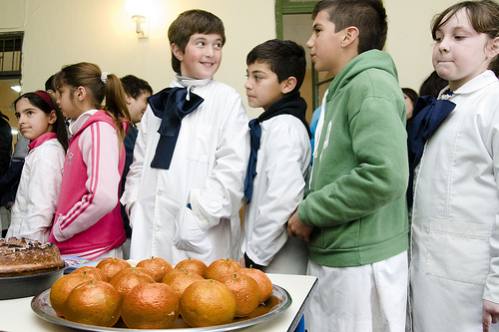 Students at Public School 124 in Melilla lining up to buy snacks during recess. Credit: Victoria Rodríguez/IPS

MONTEVIDEO, Oct 10 2012 (IPS) - Uruguayan schoolchildren are learning that cookies, candy, potato chips and soft drinks are bad for their health.

Some schools have taken the initiative and banned junk food from school snacks.

The authorities announced a ban on unhealthy food in schools but have not yet enforced it.

In the meantime, a bill presented by the opposition to prohibit the promotion and advertising of junk food on school premises was passed by the Chamber of Deputies on Sep. 11 and is expected to be approved by the Senate as well.

“We can’t bring chips and those kinds of things to school anymore, and that’s really good, because we’re children and if we eat a lot of junk food we could get a disease now or when we’re older,” declared Luciano, a student at Public School 124 in Rincón de Melilla, an area of vineyards and orchards in northwest Montevideo.

“Sometimes I get a craving for that kind of stuff, and sometimes on Sunday we go to the store and buy chips,” he confessed.

At Luciano’s school there is no privately run canteen, which means children bring their snacks from home. The school actively promotes healthy eating by prohibiting junk food, a ban that has been in effect since last year, principal Teresa Conti told Tierramérica*.

“At first we ran into some resistance from the parents, but eventually they and the children got used to not sending packaged treats. They had to accept it, because it’s now a school rule,” she explained.

“It’s much easier for parents to buy a bag of potato chips or a package of cookies, but this habit has been changed, especially since the teachers have been teaching about and promoting healthier ways of eating,” she added.

For the last several months, students in the fourth, fifth and sixth grade have been bringing in food made at home and selling it to raise funds for end-of-year trips.

Luisa, a sixth-grade student, explained that the homemade snacks they offer for sale include meat pies, cheese bread and loaf cakes, as well as fruit. “Everything gets sold,” she said while serving food at the canteen, where there was almost nothing left to buy.

In February, Óscar Gómez, who was then the director of the Board of Early and Primary Education and is now an undersecretary at the Ministry of Education and Culture, announced that the sale of unhealthy food would be banned in schools.

“The idea was that we shouldn’t act as agents for the promotion of bad habits,” Gómez told Tierramérica. The initiative, which was supposed to go into effect mid-year, was being pushed forward in line with a bill in the works since 2011, he added.

“But it was interrupted, because I moved to the ministry,” said Gómez. For now, the public education authorities are offering awareness raising and training sessions for school staff and supporting initiatives undertaken by individual schools to promote healthy eating, he said.

The head of the School Food Program at the Board of Early and Primary Education, Graciela Moizo, told Tierramérica that efforts are being focused on “an educational approach.”

“Education needs to be adapted to the social reality, which is the fact that children are being constantly bombarded with advertising for certain products,” she said. “Without a strong educational counter-response that helps children understand the things that are harmful, it would be very difficult to achieve healthy eating habits,” she stressed.

Moizo said that visits to primary schools demonstrate that there is very little unhealthy food.

There are normally no canteens in public schools, said Moizo. The few that do exist “are organised by the children or school cooperatives to raise funds for a specific purpose, and usually sell homemade food.”

“The problem with snacks is the food sold outside the schools,” she said.

In the meantime, through the School Food Program, the government provides food assistance to 67 percent of public school students, ranging from a lunch, breakfast or snack to four daily meals.

Of the 248, 590 students served daily, around 24,000 receive food purchased from outsourced companies. The rest are served food prepared in the kitchens of traditional school cafeterias, explained nutritionist Caren Zelmonovich.

According to Gómez, the vast majority of private schools have privately operated canteens. “This is where we see the highest rates of consumption of junk food, because it is also where there is greater buying power,” he commented.

Julieta, a student at the Santa Elena Institute of Education, a private Catholic school in Ciudad de la Costa, which borders on Montevideo to the east, told Tierramérica that healthy eating is discussed in her class.

“We interviewed some of the kids at the school, and most of them said they ate packaged food, but also some healthy food, and that they mostly drank water. A lot of the food in the canteen is healthy and homemade,” she said.

It is better not to eat unhealthy things at school, she admitted, but “every now and then you might get a craving for junk food, because it’s yummy… at least once a week.”

If Uruguay adopts a law, the rules and incentives would be the same for everyone.

The proposed Law on Healthy Eating in Educational Centres is aimed at protecting the health of children and adolescents in both public and private schools, but without prohibiting the sale of any products.

According to figures gathered by the sponsor of the bill, Javier García, a doctor and a member of the Chamber of Deputies from the opposition National Party, “70 percent of deaths in Uruguay are the result of chronic non-communicable diseases… basically cardiovascular and cerebrovascular diseases and cancer,” in which unhealthy habits are a major factor.

García told Tierramérica that the bill “prohibits the promotion or advertising of harmful foods in school canteens,” but does not ban their sale.

“I opted for this educational route because, otherwise, the discussion was going to be much longer,” he said. In his opinion, the educational community will become involved and eventually “the sales margin of these projects will become smaller and smaller until they are no longer sold.”

The proposed law tasks the Ministry of Public Health with providing information to be disseminated in the educational community, including a list of unhealthy foods, such as those with high fat, sugar and salt contents.

The bill is expected to be passed by the Senate during the current session and to enter into effect in March 2013, when the new school year begins.