CIUDAD DE LA COSTA, Uruguay, Feb 25 2010 (IPS) - More and more Uruguayans are keen on building ecological homes. The problem is that there is hardly any market or specialised labour for what is known as “bio-building.” 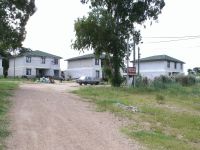 View of the Guyunusa neighbourhood Credit: Courtesy of Silvana Delfino

Inside these homes there is a pleasant environment, insulated from extreme temperatures and humidity. But perhaps most important is that they allow people to build their homes and to produce the necessary components themselves – making the dwellings more economical.

It was once common in the countryside of this small South American country between Brazil and Argentina for houses to be built with the materials provided by nature: dirt, wood, and straw. Those techniques, which are now known as bio-construction or bio-building, were passed down from generation to generation, and even today there are a few who maintain that tradition.

In the 1990s, a group of architects here began studying the use of earth in construction, at the same time the ideas and techniques were being incorporated into the curriculum at the University of the Republic’s school of architecture.

This meant that the approach could be replicated in different parts of the country – but they were isolated projects, and the government showed little interest in supporting the efforts.

Over the past 15 years, around 100 of these bio-homes have been built with the participation of the architects, and another 100 by the residents themselves.

The demand for environmentally sustainable construction techniques is on the rise, but there are no policies to guide it, no market for production and sales of eco-materials, and few construction workers familiar with the techniques.

Those are the basic elements needed to promote alternative construction, according to architect Rosario Etchebarne, an expert in bio-building and professor and researcher at the University of the Republic’s school of architecture.

“There is great public demand, and many people are interested in experimenting. But the authorities are still hesitant because we need technical standards for the construction processes, and they fear the experimental approach,” she told Tierramérica.

Etchebarne explained the three most popular techniques for building a bio-home: adobe, or sun-dried bricks; compressed earth blocks (CEB) produced by a machine; and what is known here as “fajina”, a wood frame filled in with soil stabilised with straw and other components.

“Bio-construction incorporates many concepts of sustainability. The basis of everything is that there are energy savings,” Etchebarne said.

“We would be helping to mitigate climate change because we would not be emitting any carbon dioxide into the environment; the amount of cement used is minimal,” she added.

One of Uruguay’s recent experiences in earth construction is Guyunusa, a housing cooperative in Ciudad de la Costa, in the southern Uruguayan department (or province) of Canelones, on the River Plate (Río de la Plata). The 10 homes, which were built using mud, were paid for with a loan from the Ministry of Housing.

“We chose this type of construction because we wanted cheaper and healthier housing. We researched different techniques and concluded that an earthen home was healthier and better insulated, more economical and within everyone’s means,” Silvana Delfino, a member of the cooperative, told Tierramérica.

“It’s nothing new: human beings have lived in earth homes here and in other parts of the world,” she added.

The Guyunusa housing complex also includes an ecological sanitation system. It is located in an area that is not connected to the sewage network, so the cooperative created its own, with financing from the United Nations Development Programme (UNDP).

According to Delfino, the idea behind the cooperative is “to show that with little money we can have decent housing that respects the environment.”

On the outskirts of Montevideo, in the self-managed Comunidad del Sur and La Wayra, several families built their ecological homes with the help of German architect Heiner Peters, who visited Uruguay to share his expertise.

This approach has also been used for building summer homes near the sea, as well as large houses on rural estates.

“There is no great mystery with this type of construction. It used to be that people settled in a place and built their homes with what they found around them. The problem is, perhaps, that we have ‘unlearned’ some things,” Hugo Costa, who lives in La Wayra, told Tierramérica.