CANELONES, Uruguay, Apr 20 2010 (IPS) - Water-borne diseases and illness related to natural disasters are on the agenda for plans of officials and civil society to help the precarious settlements in the outskirts of the metropolitan area of Montevideo and in other Uruguayan cities. 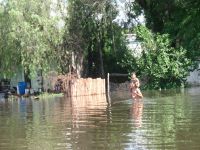 Flood victims in Mercedes, Uruguay trying to salvage what they can. Credit: Inés Acosta/IPS

Studies indicate that these poor neighbourhoods, many in low lying zones, are the most exposed to diseases resulting from flooding and other weather events that are occurring with greater frequency and intensity as a result of climate change.

Training the residents is essential so that “they can identify the problems and create an early warning network,” Leonardo Herou, director of environmental management for the government of the southern Uruguayan department of Canelones, told Tierramérica.

The departmental governments of Canelones, Montevideo and San José, through their Metropolitan Agenda, are pursuing a project to reduce greenhouse gas emissions and vulnerability to the effects of climate change, sponsored by the United Nations Development Programme (UNDP).

It is the first such experiment at the local level for analysis and application of climate change adaptation and mitigation measures.

The metropolitan programme includes land-use zoning, with specific proposals for roads and passenger transport, sanitation and solid waste treatment, a regional health plan, as well as the designation of protected natural areas.

This experiment, along with others related to climate change, will be evaluated at the 3rd World Summit of Regions on Climate Change, Apr. 20-22, in Montevideo, under the auspices of the global network of Local Governments for Sustainability. More than 450 people representing all of the member regions are expected.

It will be an occasion for greater awareness of the problem and for continuing the process of initiatives and actions being developed at the regional level, according to spokespersons from the organisation of the 19 departmental leaders of Uruguay, who are hosting the forum.

Several extreme weather events have revealed the climate vulnerability of this South American country located between Argentina and Brazil. Sixty-six percent of Uruguay’s population of 3.3 million lives in Montevideo and the metropolitan zone, which extends into neighbouring Canelones and San José.

The intensification of rainfall in the last 13 years has meant the evacuation of 100,000 people across the country, with many thousands more affected, and damages in the millions, according to studies by the University of the Republic of Uruguay.

The most devastating floods were in 1959, when almost every coastal city was hit. More recently, storms and flooding in 2005 and 2007 caused costly damages to homes, infrastructure and services.

Colder-than-normal temperatures in the austral winter of 2007, one of the country’s coldest on record, had a strong impact on public health, with high economic costs in part driven by higher energy demand as residents tried to stay warm.

In late 2009 and early 2010, in contrast with the previous year’s drought, rains were so intense that they forced thousands of people from their homes – who ultimately returned to begin a seemingly interminable process of rebuilding.

Luis Alberto Agüero lives in the neighbourhood of La Calera, in the central department of Durazno. He was a victim of the latest big floods. The rise of the Yi River destroyed his house in 2007, sweeping away most of his belongings.

Reconstruction was difficult, and little by little his life returned to normal. But two years later the river flooded again. “To recover things we have to make a huge sacrifice. I hope this doesn’t happen again,” Agüero told Tierramérica.

“Families face great insecurity – they lose their belongings and they don’t know how their lives will continue after a flood. It is a time of great emotional instability,” Gabriela Garrido, director of social development in Canelones, explained to Tierramérica.

Eduardo Méndez, representative of the Ministry of Social Development in the National Emergency System, said it is essential to develop contingency plans that attend to the needs of the most exposed populations.

“The poorest, some who are settled along riverbanks and subsisting on fishing, selling firewood and sand (for construction), are the most vulnerable to new diseases,” he said.

“That is why, if we are to prepare for climate change, we have to take this into account,” he added.

In Méndez’s opinion, awareness of the problem is just beginning. “There is a very direct effect on certain sectors of society, and between all of us we have to provide a response.”

He believes that the Emergency Housing Plan of the national government of leftist President José Mujica, which is to begin a pilot project this year, is “an effective and rapid firsthand response to an emergency that the country faces.” But he also noted “it is not enough.”