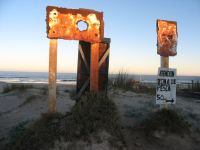 “The coastal zone and the flows of freshwater are extremely important ecosystems, where actions directly affect the marine ecological conditions, and vice versa,” Omar Defeo, a professor with the marine science development unit at the public University of the Republic, told Tierramérica.

Defeo said that in places like Costa de Oro, in the Uruguayan department (province) of Canelones, “there are bird breeding and feeding areas, and a great deal of socioeconomic activity… They are ecosystems that are in a dynamic balance with the ocean, where there are different sources of interchange.”

The population of Ciudad de la Costa, adjoining Montevideo, shot up 93 percent in the 1990s — the largest demographic growth in Latin America in that period. It is now home to 120,000 people.

That expansion was not accompanied by urban planning or sanitation infrastructure, which had a dramatic effect on the coastal strip, say experts. However, they recognise that plans are emerging — with assistance from multilateral agencies — that can help mitigate the damages.

Biologist Pablo Muniz, assistant professor of oceanology at the University of the Republic, told Tierramérica that if those ecosystems are altered, “there is nothing left from the biological perspective, and because it affects the freshwater that flows into the Río de la Plata, that has negative repercussions in the Atlantic.”

The marine environment, which includes oceans, seas and coastal areas, is an essential component for sustaining life and is a valuable resource for sustainable development — a notion highlighted at the 1992 United Nations Conference on Environment and Development in Rio de Janeiro, known as the Earth Summit.

In Uruguay, the importance of marine ecosystems is well known, and experts are concerned about the deterioration that persists along the more than 700 kilometres of coastline along the Río de la Plata and the Atlantic, where more than 70 percent of the country’s 3.3 million inhabitants live.

Fishing, tourism, shipping and industry are concentrated along that strip, accounting for 75 percent of the country’s gross domestic product, according to the report GEO 2008: Assessment of the State of the Environment in Uruguay, of which Defeo was a co-author.

The biggest problems are changes in habitat from contaminating agents, erosion, extraction of sand, and the interference in the natural movement of sediments, states the report, produced for the UN Environment Programme and the Ministry of Housing and Environment, with the support of other agencies.

The shrinking beaches have resulted in destroyed houses and streets in many of the towns along the coast, while others suffer the opposite problem — sedimentation — with sand dunes invading residential areas.

The disappearance of Ciudad de la Costa’s beaches is the result of poor management of rainwater runoff, which flows directly into the sea. In the past, it was channelled naturally into the wetlands, which have disappeared as a result of unregulated urbanisation.

Scientific studies show that contamination — from organic materials and heavy metals — is also a problem in other critical areas, such as the Santa Lucía and Pando rivers flowing through the Montevideo metropolitan area, which includes the neighbouring departments of Canelones and San José.

Another victim is the Bay of Montevideo, although actions by local authorities have been successful in reducing the volume of contaminants discharged into it by the Miguelete river, which crosses the capital.

Biologist Muniz said that today, 10 years after a university study carried out at the behest of the city government, the discharge of lead and chromium has decreased 90 percent. That reduction is evident in the improved aquatic environment, he said.

Along the banks of the Miguelete and Pantanoso rivers in Montevideo, “there were leather tanneries that discharged their chromium-based chemicals… shipping traffic in the port of Montevideo” and other industries contributing to the contamination, explained Muniz, who was part of the research team.

But in recent years, “there has been an intensification of environmental laws and controls on industry dumping, as well as a reduction in tanneries and improvements in water treatment,” he said.

Defeo, meanwhile, warned that the freshwater sources and the coastal zone of southern Uruguay are still compromised.

“We have to generate integrated management strategies for the coast that include the various factors affecting them. The issue needs the presence of the government and the creation of long-term policies,” he said.

José Luis Genta, national director of water and sanitation, told Tierramérica that greater effort is being made to improve environmental regulation of the Río de la Plata.

He cited the example of the joint effort with Argentina in the Río de la Plata Environmental Protection Project, to reduce pollution and restore wildlife habitats.

However, environmental director Jorge Rucks acknowledged in a conversation with Tierramérica that stronger coastal management is needed.

“Integrated management of the relationship between the sea and the coast, affected by the development of human activities, has not be regulated to the extent necessary,” he said, “It is a policy we are now trying to develop.”