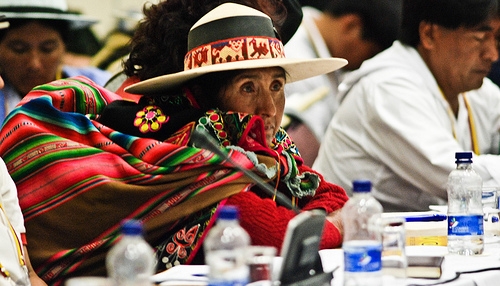 One of the participants at the Fourth Summit of Indigenous Leaders of the Americas, which met this week in Cartagena, Colombia. Credit: Camilo Segura/IPS

CARTAGENA DE INDIAS, Colombia, Apr 14 2012 (IPS) - During the closing session of the Social Forum of the Sixth Summit of the Americas, the broadcast signal was cut off, triggering protests from participating indigenous leaders. But that did not stop the voice of Abya Yala – the ancestral name of the continent – from being heard.

The TV broadcast of the event was cut off as the final declaration of the Fourth Summit of Indigenous Leaders – held this week as part of the Social Forum – was being read out to the hemisphere’s foreign ministers, who are attending the Summit of the Americas this weekend in Cartagena.

According to the press office of Colombia’s foreign ministry, the presentation of the final declaration was not recorded because of a “blackout” in the venue where the Social Forum was held in this Caribbean port city.

The “blackout” occurred when Luis Evelis Andrade, chief councillor of the National Indigenous Organisation of Colombia (ONIC), was describing the sacredness of the coca leaf to native peoples.

“The words of indigenous people were sabotaged,” Silsa Arias, a leader of the Kankuama people of Colombia, told IPS.

ONIC sources described as “suspicious” the fact that the broadcast was interrupted just when the declaration was referring to the question of the legalisation of consumption of coca leaves.

The incident occurred prior to the arrival of presidents Juan Manuel Santos of Colombia and Evo Morales of Bolivia to the closing session of the Social Forum.

“We don’t want to be a folkloric aspect of democracy,” Andrade told IPS. He was one of the indigenous leaders meeting in Cartagena to present their position with respect to key issues for their people.

According to their final declaration, “Weaving Alliances in Defence of Mother Earth”, these issues are the legalisation of drugs; the armed conflict in Colombia; the extermination of indigenous cultures across the continent; the right of communities to prior consultation on extractive industry and infrastructure megaprojects that affect their territory; and development models.

To address these issues, the indigenous leaders decided to move over the next three years towards the creation of a council of social organisations of the native peoples of Abya Yala (one of the pre-Columbian names for the Americas), to hold a horizontal dialogue with the Organisation of American States (OAS) member countries.

On Wednesday, Apr. 11 it was reported that 70 indigenous peoples in the Americas are in the process of “extermination.”

Several of the leaders urged the governments of the OAS member countries to urgently sign the United Nations Declaration on the Rights of Indigenous Peoples, approved by 143 countries at the U.N. General Assembly in 2007.

The ratification process for the Declaration, which the native peoples of the Americas see as an essential instrument for preventing the disappearance of indigenous cultures, has not yet been completed.

Andrade told IPS that while countries like El Salvador have not ratified the Declaration, others have done so but are not abiding by it.

Criticism of development models, defence of human rights, and rejection of megaprojects such as mines and hydroelectric dams are the main themes of the document presented to the OAS foreign ministers.

However, the emphasis on the consumption of coca leaf caused a commotion.

“How can alcohol and tobacco be legal in our territories, while an ageold tradition like the chewing of coca leaves is criminalised by the states,” said Miguel Palacín, the coordinator of the Andean Coordinator of Indigenous Organisations (CAOI).

Another central point of the final declaration was the indigenous movement’s criticism of the global policy to mitigate climate change.

The indigenous leaders demanded that their contributions be taken into account in the design of a new policy to confront global warming.

In addition, they had harsh words of criticism for the failure to comply with the Millennium Development Goals (MDGs) – a set of anti-poverty and development targets adopted by the global community, with a 2015 deadline – with regard to native peoples. They also complained about the digital and technological gap.

At the end of the meeting, Silsa Arias stressed that “although we are invited to this kind of event, we have very little participation in far-reaching decisions in the continent.”

He thus proposed the creation of an indigenous consultative body, “which the states and the OAS secretariat-general itself would be legally bound to consult.”

At the same time, leaders from the Andean region proposed to strengthen legal action before the Inter-American justice system, which is handling more than 30 lawsuits against states for violations of the human rights of indigenous peoples.

Morales, Bolivia’s first-ever indigenous president, took part in the closing ceremony of the Social Forum, along with host President Santos.

Although he was not present for the debates, he emphasised the presence at the Social Forum of two presidents, which he described as “a step forward” that could have repercussions.

In the past, the dialogue took place along parallel tracks, and society and the presidents did not meet, he said.

Morales stressed the importance of moving towards “the nationalisation of natural resources, as a way to mitigate climate change,” because it is the communities who should administer the earth’s resources.

* With additional reporting by Constanza Vieira in Cartagena.