CARTAGENA DE INDIAS, Colombia, Apr 15 2012 (IPS) - “What matters at this summit is not what is on the official agenda,” said Uruguayan analyst Laura Gil, echoing the conventional wisdom in this Colombian port city, where the Sixth Summit of the Americas ended Sunday without a final declaration. 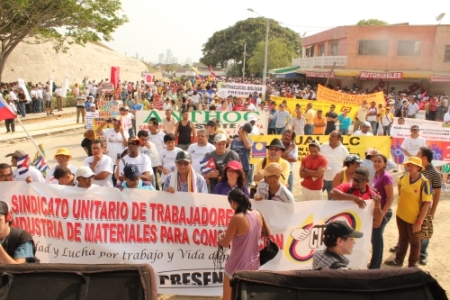 The Fifth Summit, held in Port of Spain, the capital of Trinidad and Tobago, in 2009, had a similar outcome.

At the Sixth Summit, which opened Saturday Apr. 14, the foreign ministers failed to reach prior agreement on a consensus document.

Key points of discord were the continued U.S. embargo against Cuba and Argentina’s claim to sovereignty over the Falkland/Malvinas Islands, a British overseas territory in the South Atlantic.

Gil, an expert on international relations who lives in Colombia, told IPS that “a consensus on drugs seems to be forming among the countries of Latin America.”

“These three issues are precisely the ones that are dividing the hemisphere in two, or confronting the countries of Latin America with the United States and Canada,” she said.

“The Summit of the Americas process is in crisis. What the Sixth Summit clearly shows is that certain issues cannot be put off any longer, particularly that of Cuba,” excluded from the Americas summits due to pressure from the United States, she added.

In Gil’s opinion, “there will not be another summit without Cuba. Either Cuba is included, or there will not be a summit at all. The absence of (Ecuadorean President Rafael) Correa is a red alert,” she said, referring to the Ecuadorean president’s promise not to attend any further hemispheric meetings to which Cuba is not invited.

According to the expert, “Colombia positioned itself as a bridge, able to facilitate relations between contrary ideological blocs. But from this position, Colombia cannot work miracles.

“This summit reminds us that ideologies are still a force to be reckoned with. The limitations are plain to be seen,” she said.

Canada and the United States were left in isolation in a vote on a resolution to put an end to Cuba’s exclusion, which was split 32 against two, at a meeting of foreign ministers that was to approve documents to be signed by the presidents.

On Saturday morning it was announced that Venezuelan President Hugo Chávez would not be attending the summit, due to the treatment for his cancer.

At the end of the first day’s meetings, the countries of the Bolivarian Alliance for the Peoples of Our America (ALBA) released a declaration in Cartagena stating that they would not attend any further summits without the participation of Cuba.

ALBA is made up of Antigua and Barbuda, Bolivia, Cuba, Dominica, Ecuador, Honduras, Nicaragua, St. Vincent and the Grenadines, and Venezuela.

At the opening ceremony of the Sixth Summit, Colombian President Juan Manuel Santos did not mince words. He exhorted delegates “not to be indifferent” to the changes occurring in Cuba, which he said were ever more widely recognised and should be encouraged.

“It is time to overcome the paralysis that results from ideological obstinacy and seek a basic consensus so that this process of change has a positive outcome, for the good of the Cuban people,” he said.

“The isolation, the embargo, the indifference, looking the other way, have been ineffective,” Santos said.

As for Haiti, the poorest country in the hemisphere, Santos recommended supporting the agenda of the Haitian government, instead of pushing “our own agendas.”

He also said that “Central America is not alone.” Organised crime must be combated, but anti-drug policy should be focused on “the victims,” including “the millions” locked up in prisons, Santos said.

This summit will not find an answer to Latin America’s calls for facing up to the failure of the war on drugs, “of this I am completely certain,” he said.

U.S. President Barack Obama let it be understood that his country would tolerate flexibilisation of Latin American anti-drug policies, saying “I think it is entirely legitimate to have a conversation about whether the laws in place are ones that are doing more harm than good in certain places.”

But he flatly rejected legalisation.

“I know there are frustrations and that some call for legalisation. For the sake of the health and safety of our citizens – all our citizens – the United States will not be going in this direction,” Obama said on Saturday.

He also announced that the U.S. government would increase its aid to the war on drugs led by “our Central American friends” and pledged “more than 130 million dollars this year.”

Colombian expert Ricardo Vargas of Acción Andina, a local think tank, summed up the U.S. position: “‘You may decriminalise drugs, but that will not eliminate the mafias. And we will be there’,” with a military presence as soon as drug shipments cross the borders, he told IPS.

From another part of the city of Cartagena, Enrique Daza, the coordinator of the Hemispheric Social Alliance, a movement of social organisations that organised the Fifth People’s Summit, held in parallel to the Summit of the Americas, announced their “satisfaction” at the same time as President Santos received a standing ovation in the auditorium where the heads of state were gathered.

“They were not able to keep our demands hidden,” Daza said at the close of the counter-summit.

The alternative summit rejected the United States’ “imposition of its agenda” at the Summits of the Americas, and demanded an end to militarisation based on the pretext of the war on drugs, which in fact ends up criminalising social protest, he said.

In its final declaration, the People’s Summit castigated the United States and Canada for insisting on the promotion of free trade treaties with other countries of the continent.

Canada came in for heavy criticism for fomenting a “predatory model” for the operations of its mining companies in Latin America. “The rights of investors cannot take precedence over the rights of people and of nature,” the final declaration says.

While recognising the efforts of bodies such as ALBA and the fledgling Community of Latin American and Caribbean States (CELAC), the declaration expressed that “progressive and left-wing” governments in the Americas should take steps against the extraction of natural resources and the concentration of land ownership.

On the positive side, the People’s Summit proposed independent integration within the region, and knowledge and respect for the contributions of indigenous people and peasant farmers to the art of “good living” and a culture of peace.