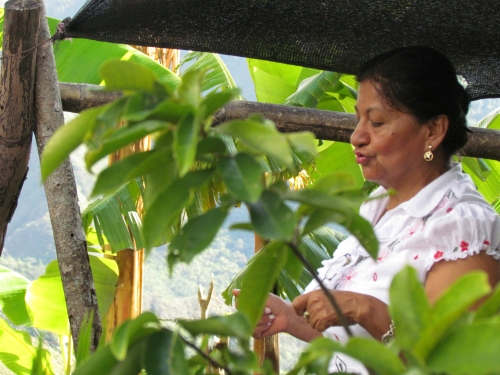 NEIVA, Colombia, May 8 2012 (IPS) - “Out of love for the river, we reforest, recycle, and make this place beautiful,” says a sign welcoming visitors to the Floragaita school, where a balsa (Ochroma pyramidale) tree with enormous white flowers guards the entrance to the lush green grounds on a hill in the heart of Colombia’s Andes mountains.

The Floragaita schoolchildren themselves came up with that slogan for a campaign launched in 2006 by Celia Cardozo, a slight, vivacious teacher who coordinates the 10 public secondary schools that serve the rural outskirts of Neiva, the capital of the southwestern province of Huila, which have incorporated environmental issues in the teacher training programme.

The campaign won a prize granted as part of the Las Ceibas River Basin project, which got under way in 2008 in this rural, mountainous area outside Neiva. Before the project began, local farmers widely used the slash-and-burn technique and people dumped everything into the river, from raw sewage to old mattresses.

Cardozo is determined to buy a blender to make recycled paper at the Santa Helena secondary school, which is in the same area. “People here don’t have paper,” she told IPS. But she added that the main objective is “to save even just one little tree a year.”

In February, the Santa Helena school won 450 dollars when it took second place in a contest for a prize awarded locally by the United Nations Food and Agriculture Organisation (FAO). But that is 60 dollars less than what the blender costs.

First prize, 560 dollars, went to Floragaita, for the best proposal for environmental education in the Las Ceibas River Basin.

The Las Ceibas River is the only source of piped water for Neiva, a city of 295,000 people 300 km southwest of Bogotá, where day-time temperatures range between 28 and 37 degrees year-round.

The population of Neiva grew by 130,000 people in the last 20 years. But the water flow in the Las Ceibas River has significantly declined.

The challenges are to reforest, in order to improve water retention, and to put an end to the slash-and-burn technique, traditionally used by local peasant farmers to clear land, which increases the sediment load in the river.

Another task is to get the 600 families living in scattered houses in the river basin to adopt farming practices that combine production with conservation, while improving water quality.

“If we manage to do this, it’s possible that by 2030, when Neiva has grown by another 100,000 or 130,000 inhabitants, we will still have good quality water in the river, to supply that population,” Humberto Rodríguez, an engineer who heads the Las Ceibas River Basin project, told IPS.

Despite the abundance of water resources in much of Latin America and the Caribbean, 15 percent of the population lack access to drinking water, and more than 20 percent have no basic sanitation.

The Las Ceibas project, which began in 2008, operates well under a trust fund system which ensures that the money is not lost in a maze of poor management.

Besides FAO, partners in the project include the Empresas Públicas de Neiva – the municipal public utilities company – and the city government, which told IPS that the plan is for the project to continue to form part of its Development Plan until 2015.

Other partners are the Huila provincial government and the Corporación Autónoma Regional del Alto Magdalena – the environmental authority in the area.

But in Rodríguez’s view, the main partner is the community itself. “Unless the community makes a project its own, you can’t say things are working well,” he said.

“Governance means, precisely, participation and responsibility shared by the institutions and the community. Only under these conditions can we say there is real governance” in the river basin area, he said.

In Floragaita, they are starting at the beginning: with the children. In fact, only three of the 18 students say they think “the city is better.” The rest say they want to stay in the countryside.

“They say they don’t like Neiva because it’s too hot there, and because everything costs money, even a glass of water, and there are many thieves. The smartest ones make these comparisons,” said Nelly Olaya, a teacher who works together with Cardozo.

The dirt road climbs in several curves before it reaches the school, where three one-storey buildings, including a cafeteria, are surrounded by trees and abundant vegetation. In one of the large classrooms, there are half a dozen computers with broadband internet connection.

There is also a greenhouse where a variety of trees are grown, including: soursop (Annona muricata), which produces a long, prickly green fruit that can weigh up to two kilos; cambara (Erisma uncinatum), a tree that provides medium density wood that is used locally for making fences; and naranjillo (Trichanthera gigantea) and naked albizia (Albizia carbonaria), trees that protect river banks.

Sometimes, the children of Floragaita make field trips to plant dozens of tree seedlings along rivers on nearby farms.

The first tree planting session took place in 2005, when the children planted 75 seedlings. They have planted 300, 400 and up to 1,200 seedlings along rivers threatened by deforestation in this rural area.

On the tree planting days, the children play games using the multiplication tables, and learn what each tool is called in English.

Because the Floragaita school grounds are small, Olaya proposed that the families prepare an area where the children can sit outside, “so they won’t spend all day in the classroom.”

That is how the school got its “environmental classroom”, 3,200 square metres in size, under large pine trees, with aviaries made by the children and their parents, and tables and wooden benches painted with hearts and surrounded by flowers.

Hands-on mathematics is taught here. “I give them a tape measure and I tell them ‘two metres long’, ‘one centimetre wide’,” and the students measure the objects around them, the teacher says.

“There is no need to write on a blackboard that this is a metre and this is a centimetre; we don’t have paper here,” Olaya explains. “So I teach this to them using a tape measure.”

The children sit and look out at the view for geography class, learning what is a hill, a mountain range, a river basin, a tributary, or a valley.

The land for the environmental classroom was loaned to the school by Álvaro Díaz, the president of the Junta de Acción Comunal, an elected local civic organisation.

Díaz’s eight children went to school here. “The future is in the countryside,” which is why it is important for the children to fall in love with nature, he says, adding that they “learn better” in a classroom like this one.

But of the 35 assistant teachers who have been posted to Floragaita, 29 or 30 hope to continue their studies in areas that have nothing to do with the countryside.

Olaya always takes the new assistant teachers to the greenhouse first, and tells them: “If you don’t want to get dirty, then don’t be a rural schoolteacher.”