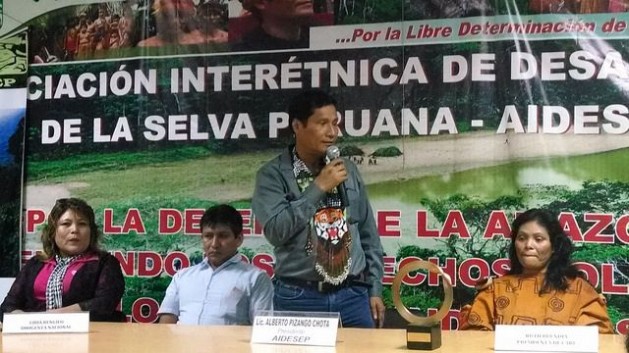 Alberto Pizango (standing) speaking at an event organised by the Interethnic Association for the Development of the Peruvian Rainforest (AIDESEP), which he heads. Credit: Milagros Salazar/IPS

LIMA, May 16 2014 (IPS) - The trial of 52 indigenous people that just got underway for a 2009 massacre near the city of Bagua in northwest Peru will test the judicial system’s independence and ability to impart justice.

The oral phase of the trial opened Wednesday May 14 in a court in Bagua in the northern region of Amazonas. The next hearing will be held May 26.

The defendants are indigenous leaders and residents involved one way or another in the Jun. 5, 2009 clash between security forces and protesters that left 34 people dead – 24 police officers and 10 civilians – and around 200 injured.

Indigenous people in that Amazon region had blocked a highway near Bagua for two months, demanding the repeal of decrees passed by the government of Alan García (2006-2011) that opened up native territories in the rainforest to oil, mining and logging companies, violating rights guaranteed in the constitution.

Several of the decrees were repealed.

But the bloody incident made headlines around the world.

The 52 people on trial – a 53rd died last year – are facing anywhere from six years to life in prison, one of the defence lawyers, Juan José Quispe of the non-governmental Legal Defence Institute (IDL), told IPS.

The public prosecutor’s office has not yet filed charges against 12 police officers also implicated in the violence, Quispe said. 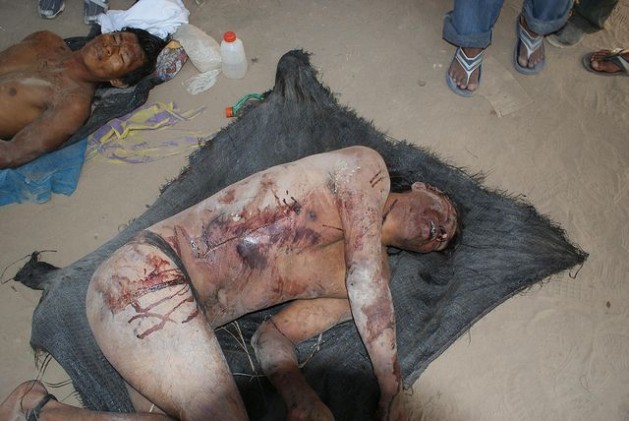 The bodies of some of the indigenous people killed in Bagua. Credit: Courtesy Fedepaz

But it is demanding a life sentence for seven of the 52 civilians, including indigenous leader Alberto Pizango, president of the Interethnic Association for the Development of the Peruvian Rainforest (AIDESEP), which organised the 2009 protest and roadblock.

“We follow the people’s mandate,” Pizango told IPS a few days before the start of the oral phase of the trial.

After the massacre, Pizango went into exile in Nicaragua. But he returned in May 2010. The other defendants facing a possible life sentence are Santiago Manuim, Héctor Requejo, Ronald Requejo, Danny López, Feliciano Cahuasa and Joel Shimpukat.

According to Quispe, there have been irregularities from the very start. For example, he said, the justice system did not accept the defence’s request to interrogate former president García and several of his ministers.

“The court told us it was not summoning them because they were not eyewitnesses,” the lawyer told IPS. “But this case has political implications.”

One key aspect that must be investigated, said Quispe, is whether the cabinet of ministers knew that, a day before the massacre, the indigenous leaders had sent a letter to the police station in Bagua informing the police that they would peacefully withdraw from the Devil’s Curve, where they had set up the roadblock.

The indigenous leaders say an agreement had already been reached with the police chief that, if the order to dismantle the roadblock came from Lima, the protesters would be warned ahead of time, to allow them to peacefully pull out.

But at 5:00 AM the morning of Jun. 5, 600 heavily armed police swarmed in to disperse the protesters on the Devil’s Curve, a stretch of the road that links the main rainforest cities in northern Peru with the coast.

When they heard that the police had opened fire at the roadblock and that protesters were being killed, the Awajún native demonstrators occupying a nearby oil pumping station – Estación 6 – decided to take reprisals against a group of police posted there.

At the first hearing of the trial, the court did not provide interpreters for the Awajún speakers.

“They needed to take down the full names, place of birth, number of children, incomes of the defendants,” Quispe told IPS. In the end, one of the indigenous leaders, Merino Trigoso, “had to act as interpreter,” he added.

But the failure to supply an interpreter meant the reading of the charges by the public prosecutor had to be suspended, because the 14 defence attorneys – provided by the IDL, the Catholic Vicariate of Jaén, and AIDESEP – demanded that the written document be translated into the Awajún language.

According to Quispe, the president of the court, Gonzalo Zabarburu, made another mistake when he sentenced one of the defendants, Feliciano Cahuasa, to house arrest in a city different from the one already determined by another judge.

“That arbitrary decision affects the defendant, who had already done all the paperwork and taken the steps needed to comply with the order of the other judge, and now has to find a new home, to serve his house arrest,” said Quispe.

Cahuasa, accused in connection with the death of police Major Felipe Bazán during the incident in Bagua, spent nearly five years in prison without a sentence, despite the fact that under Peruvian law the limit is three years. The defence finally managed to get him transferred to house arrest.

The court also made a risky decision by ordering that one of the defendants, Trigoso, be transferred to a police station during a recess in the trial rather than leaving him in one of the rooms in the court building until the hearings began again.

Trigoso was escorted by several police through a large crowd of indigenous family members and supporters anxiously waiting outside the building.

“Something regrettable could have happened because of an absurd order by the judges,” said Quispe. But there were no incidents.

One of the first lessons that Bagua left indigenous communities was that they needed to move from “the big protest to the big proposal, and from the big proposal to the big action, which consists of the full exercise of the right of self-determination of [indigenous] people,” Pizango told IPS.

“The people will never again block highways, because now they know the trap the Peruvian state sets up. If you come out to defend the voice of the people, what you receive is aggression, bullets and a whole system of misinformation,” he added.