BAGUA, Peru, Jun 11 2009 (IPS) - Indigenous people taking part in protests near this town in the northern Peruvian province of Amazonas that ended in a bloody clash with the police last week are now focusing on drawing up a list of the dead and missing, amidst a climate of fear and mistrust. 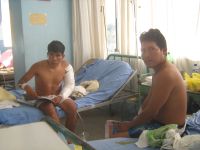 Several eyewitnesses said they saw police load the bodies of dead protesters into a helicopter and dump them into the Marañón river, after the Friday, Jun. 5 incident in which both demonstrators and policemen were killed.

But authorities from the prosecutors office failed to find any more bodies on their third search in the area, carried out on Wednesday.

For the past two months, native protesters have been blocking roads and access to oil industry installations to demand the repeal of a series of government decrees that violate their land rights, which are protected under the constitution and by international conventions signed by Peru.

"The helicopter stopped at least three times to pick up bodies," Luis Padilla, a member of the Awajun ethnic group from Río Santiago in Amazonas province, told IPS. "That was between eight and nine in the morning on Friday," added Padilla, who said it took three days to reach the town of Bagua from his village.

Padilla, who was wary of the camera, said that on Friday, Jun. 5 the police opened fire on the protesters manning the roadblock at a spot along the highway into Bagua called Curva del Diablo (Devil’s Curve), at around 6:00 AM, and that in response the indigenous demonstrators used their spears. "We defended ourselves," he said.

The police "picked up the bodies of our brothers and sisters and dumped them into the Marañón river," added Joel Tupicá, from the district of Nieva, who along with Padilla and another 24 Indians, including two women, were on their way back to their home villages on Wednesday, five days after the violent incident that left at least 30 protesters and policemen dead.

The number of victims is in dispute, with the authorities saying 10 civilians – including protesters and local residents – were killed and indigenous groups putting the total much higher.

A climate of fear and tension

Oswaldo Bautista, chief prosecutor of Amazonas province, told IPS that around 1,000 indigenous people have returned to their villages over the past few days, and that most of them had taken refuge in local churches for fear of reprisals by the state security forces.

Lawyers with the non-governmental Coordinadora de Derechos Humanos human rights group, who have come to Bagua to verify what happened last week, said more than 50 protesters are still under arrest in four different towns.

The incident, described by Amazon Watch programme coordinator Gregor MacLennan as a "massacre" of peaceful protesters, some of whom were still asleep at the roadblock when the police showed up, while others were shot as they fled, has heightened the tension in the area, because the army and police are still posted here and a curfew remains in place.

Several "apus" (traditional leaders of indigenous communities) have decided not to return to Curva del Diablo, for fear of being arrested. The authorities have blamed the violence on the leaders of the Peruvian Rainforest Inter-Ethnic Development Association (AIDESEP), an umbrella group of 28 federations of indigenous peoples that has led the protests.

AIDESEP’s top leader, Alberto Pizango, has been given asylum in the Nicaraguan Embassy in Lima.

"They burned the bodies of some protesters, over there," said Padilla, who was unable to provide the names of victims due to the chaos and confusion that reigned on Friday and the fact that the demonstrators came from more than 356 different villages and communities.

AIDESEP has set up committees in each community tasked with drawing up lists of people who have not returned to their homes, in order to demand that the state provide information on their fate.

"We want to recover the bodies of our missing people," said Edwin Montenegro, the local leader of Río Kanus in the Amazon district of Condorcanqui, who was directly involved in the Jun. 5 incident.

At the Curve of Death

Some 3,000 indigenous protesters were blocking the Fernando Belaúnde Terry highway at the Curva del Diablo when the police showed up to dismantle the roadblock early that morning and told them, just before opening fire, "you’ll leave here dead or alive," said Montenegro.

He told IPS that in the days leading up to the events of Jun. 5, protesters and local authorities had met with General Víctor Uribe, who was in charge of the operation to break up the traffic blockade, with a view to reaching a peaceful agreement.

Montenegro said a Thursday, Jun. 4 meeting with General Uribe failed to produce results. However, they had agreed to continue the talks on Friday at 10:00 AM – a meeting that never took place, because the attack on the protesters occurred four hours earlier.

The mayor of Condorcanqui, Héctor Requejo, confirmed to IPS that on Thursday they met with Uribe in the camp at the Petroperú oil refinery, and that the general said he himself could not make any decisions, but merely followed orders from Lima.

Montenegro said that when they opened fire on the crowd, the police aimed directly at the protesters, and that people were shot from a helicopter as well, which also launched tear gas canisters.

In the confusion, he was able to save his brother-in-law, prominent Aguaruna leader Santiago Manuin, president of the Condorcanqui Provincial Protest Committee (Comité de Lucha Provincial de Condorcanqui), who was seriously wounded.

Three young indigenous men who are being treated for bullet wounds at the Gustavo Lanatta Hospital in Bagua confirmed that the police launched the attack, without warning.

The three young men are all former members of the army. One of them, 24-year-old Paulo Bitap López from the village of Shusug, told IPS that a group of former soldiers decided to approach the police before the operation to break up the roadblock, to attempt to dissuade them, but that they found themselves caught up in a rain of bullets.

Rosa Mondragón, a 54-year-old woman who lives near the spot where the incident took place, said she saw tear gas being thrown from a helicopter, and showed prosecutor Bautista bullet marks on the walls of her house, as well as more than 20 backpacks and bags of utensils of indigenous protesters who slept overnight at her house for a week but fled after the attack.

The prosecutor searched gullies and ravines near the Curva del Diablo on Wednesday, after doing the same in other areas on Sunday and Monday in response to reports by local residents that bodies had been hidden there.

Bautista told IPS that no bodies were found in the latest search, only clothing and bottles of chicha, a traditional corn liquor.

Shots in the square

One of the wounded interviewed by IPS in the hospital was Daniel Torres Manay, a 55-year-old resident of Bagua who was hit in the stomach by a police bullet on Friday Jun. 5 when he was near the square where the police station is located.

Torres and his wife Amelia Delgado said the police began to shoot that day at around 11:00 AM when a group of people gathered outside the police station, after they heard that the indigenous protesters had been attacked.

According to the head of the Amazonas ombudsman’s office, Roberto Guevara, five of the nine victims acknowledged by the authorities were local residents, not indigenous people, killed by police bullets in the streets around the square.

"President Alan García committed this crime," complained Torres, who has undergone two unsuccessful operations to extract the bullet, and is waiting to be transferred to the northern city of Chiclayo for life-saving surgery.

"After we draw up a list of our brothers and sisters who were killed, we will continue our protest," said Montenegro. "The government thinks that we have chickened out, but that will never happen. The blood of their brothers and sisters is an incentive to the Awajun people. The state has provoked us. We don’t want to talk to either (Prime Minister) Yehude Simon or (Interior Minister Mercedes) Cabanillas."

In a 57 to 47 vote Wednesday, Congress decided to suspend the implementation of two of the decrees protested by the native groups, which according to experts and legislators affect the rights of indigenous people and violate the constitution and International Labour Organisation (ILO) Convention 169 on indigenous people.

The government decrees, which are aimed at promoting foreign investment in the framework of the free trade agreement signed with the United States, open up indigenous land to private investment by oil, mining and logging companies.

Indigenous people in Peru’s Amazon jungle region, where oil companies are increasingly active, began last year to hold protests to demand that the decrees be revoked.

A multi-party legislative committee also recommended last December that they be overturned.

But AIDESEP vice president Daysi Zapata criticised the legislature’s decision to suspend the two decrees, because her organisation is demanding that they be struck down.

On Thursday, social movements held national demonstrations in solidarity with the indigenous protesters, and an indefinite strike was declared in several areas in the country’s northeastern Amazon region.

"The Amazon represents our market, our pharmacy, our home, our survival; we are defending it for the good of our people and of humanity," said Montenegro.