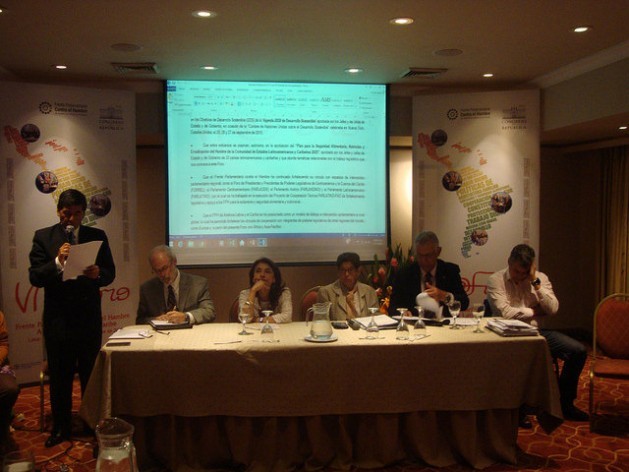 Peruvian lawmaker Jaime Delgado reads out the final declaration of the Sixth Forum of the Parliamentary Front Against Hunger in Latin America and the Caribbean, in Lima. From left to right: John Preissing, FAO representative in Peru; Ecuadorean lawmaker María Augusta Calle; and Uruguayan legislator Bertha Sanseverino, with other participants in the meeting. Credit: Aramís Castro/IPS

LIMA, Nov 19 2015 (IPS) - With eight specific commitments aimed at pushing through laws and policies on food security and sovereignty, family farming and school feeding programmes, legislators from 17 countries closed the Sixth Forum of the Parliamentary Front Against Hunger in Latin America and the Caribbean.

During the Nov. 15-17 Forum in the Peruvian capital, the delegates of the national chapters of the Parliamentary Front Against Hunger (PFH) reasserted their determination to promote laws to “break the circle of poverty and enforce the right to food” in the region.

The more than 60 legislators who took part in the Forum, including guests from Africa and Asia, stated in the final declaration that of all of the world’s regions, Latin America and the Caribbean had made the greatest progress in reducing hunger, cutting the proportion of hungry people by more than half, in the context of the Millennium Development Goals (MDGs), which had a 2015 deadline.

“After six years of debate, we understand the concept of food sovereignty to mean eliminating injustice to preserve the environment and biodiversity.” -- María Augusta Calle

But after stressing these results, John Preissing, representative of the United Nations Food and Agriculture Organisation (FAO) in Peru, called on the legislators not to be content “with averages” that hide inequalities between and within countries.

He also stressed that “it will be much more difficult” for the region to reduce the proportion of hungry people to two or three percent, than what they already managed to do: to cut the percentage from 32 to seven percent.

In Latin America and the Caribbean, some 37 million of the region’s 600 million people are still hungry, of a total of 795 million hungry people around the world, the Forum participants were told.

The final declaration emphasised that it is essential that the PFH work together with the governments of each country to create programmes and pass laws aimed at eradicating hunger, and to promote the three main areas for doing so: food security and sovereignty, family farming, and school feeding.

To advance in these three complementary areas, eight specific accords were reached, including the need for PFH legislators to participate in the debate on public budget funds, in order to guarantee that governments finance programmes against hunger.

The final declaration included the conclusions of the working groups on these three central themes, where one of the key issues was the importance of promoting public policies to benefit small farmers.

In another agreement, the lawmakers committed themselves to backing a new concept of food sovereignty.

“After six years of debate, we understand the concept of food sovereignty to mean eliminating injustice to preserve the environment and biodiversity,” Ecuadorean lawmaker María Augusta Calle, who the Forum ratified in her post as regional coordinator of the PFH, told IPS. 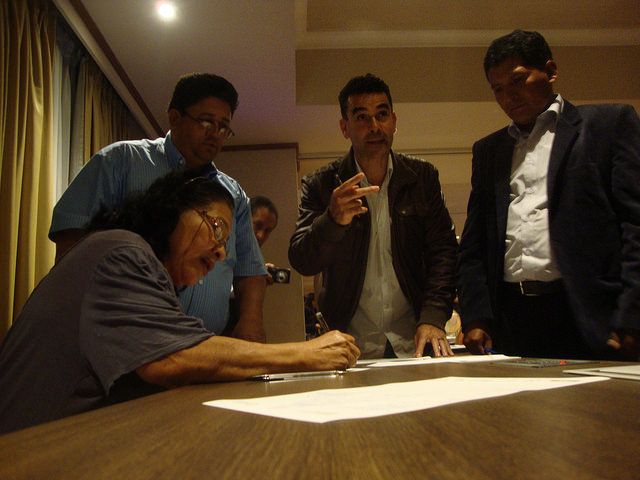 Members of the Parliamentary Front Against Hunger in Latin America and the Caribbean sign the final declaration of the Sixth Forum at the end of the Nov. 15-17 gathering in Lima, Peru. Credit: Aramís Castro/IPS

The next step, according to Calle, is to deliver the accords – especially the ones linked to food sovereignty – to the heads of state and government of the Community of Latin American and Caribbean States (CELAC), during the summit to be held in January 2016 in Ecuador.

“They asked us to draw up the concept of food sovereignty that has been debated here,” said Calle.

The parliamentarians also agreed to support CELAC’s plan for its member countries to reach the goal of “zero hunger” by 2025 – five years before the deadline established by the new Sustainable Development Goals (SDGs) approved by the international community in September.

Uruguayan legislator Bertha Sanseverino, the subregional coordinator of the PFH in South America, told IPS that the Forum established long-term commitments to “eradicate hunger by 2025” in the region.

She said that meeting this goal will require “a complex effort to design public policies and laws.”

One hurdle standing in the way of the many initiatives launched by the PFH national chapters, said Sanseverino, is the inevitable and democratic renewal of parliament. “Sometimes they have a good Parliamentary Front, but those legislators serve out their terms, and the following year you come up against the need to put the Front together again,” she said.

The FAO’s Preissing said eradicating hunger in the region is “an uphill task….But we can do it, there is evidence here, there are commitments,” he added optimistically.

The Forum expressed its support for small-scale community agriculture, as well as traditional knowledge and practices of Latin America’s indigenous peoples, as instruments of healthy, diverse diets.

It also warned about a food-related problem that is new in the region, and has begun to affect the population of Latin America – the junk food craze, which is bringing problems that did not previously exist, like widespread obesity.

Before the Sixth Forum came to an end, all of the participants sent a communiqué to the president of the host country, Ollanta Humala, urging him to approve the regulations for the bill on the promotion of healthy eating, which was signed into law in May 2013, and whose implementation has been blocked by his failure to do so.

“This law has been a pioneer in Latin America, and they (the participants in the Forum) are surprised that since we were pioneers, the law has not been codified,” the coordinator of the Peruvian chapter of the PFH, Jaime Delgado, told IPS, pointing out that the law had served as a model for countries like Ecuador.

He added that the PFH is trying to make sure that the 2016 budget about to be approved includes funds earmarked for the fight against poverty, while he complained that “there are programmes that do not benefit small farmers,” who are the main link in the country’s food security chain.

Next year, the members of the regional front will meet in Mexico, in a new edition of the parliamentary forum.