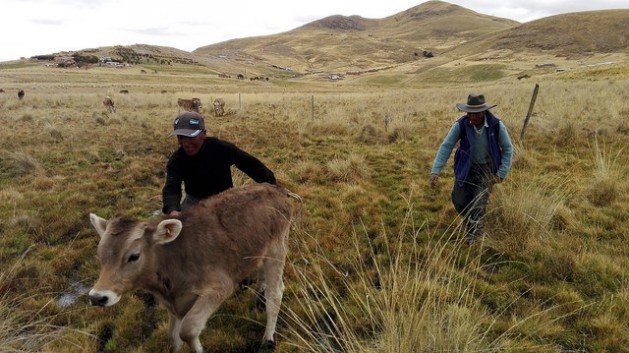 Two peasant farmers with a calf in the Andes highlands community of Alto Huancané in the southeastern department of Cusco. Small farmers like them provide around 80 percent of the food for the inhabitants of Latin America and the Caribbean. Credit: Milagros Salazar/IPS

LIMA, Nov 7 2015 (IPS) - Undertaking the challenge of pushing for new legislation to guarantee food security in their countries, legislators from Latin America and the Caribbean, together with guest lawmakers from Africa and Asia, will hold the Sixth Forum of the Parliamentary Front Against Hunger Nov. 15-17.

The Forum will provide an opportunity to share experiences, said Aitor Las Romero, in charge of organisation of the forum in the Peruvian office of the United Nations Food and Agriculture Organisation (FAO), which provides support to the Parliamentary Front Against Hunger, created in the region in 2009.

The list of participants in the forum is still open; “other countries of Latin America that have not yet formed their Parliamentary Front, but want to start working towards that goal, are even participating,” the FAO expert told IPS.

The central issues at the sixth Forum will be food security, healthy eating, and other proposals to fight hunger, Peruvian congressman Modesto Julca, who was the first coordinator of the Peru chapter of the Parliamentary Front Against Hunger, told IPS.

FAO estimates that 34.3 million people in the region are hungry, according to the latest edition of the Panorama of Food and Nutritional Security in Latin America and the Caribbean, released in May by the FAO regional office in Santiago, Chile.

Peruvian anthropologist Jorge Arboccó said “poverty and hunger are closely intertwined with land use, those who administer it, and the role of states in that relationship.”

In Latin America, 81 percent of food products come from small-scale family agriculture. “They are the farmers who generate the most employment in our countries, employing between 57 and 77 percent of the economically active population,” Arboccó has stated, based on FAO figures.

Although the fight against hunger transcends borders, each national chapter of the Parliamentary Front Against Hunger works at its own pace according to the political situation in each parliament.

In the case of Peru, the Front is made up of 13 members “and some participate more than others, but we are working for it to be represented better by all the political forces,” Las Romero told IPS.

The sixth Forum will focus on three main thematic areas, according to the agenda released Friday Nov. 6. The first will be “the plan for food security, nutrition and hunger eradication in the Community of Latin American and Caribbean States (CELAC) by 2025.”

The other two are “parliamentary dialogue between the Parliamentary Front Against Hunger of Latin America and the Caribbean with parliamentarians from Asia-Pacific, Africa and other regions,” and “the construction of commitments and policies that strengthen the enforcement of the right to adequate nutrition and food and nutritional sovereignty and security.”

These three thematic areas will overlap during the discussions among the legislators in Lima with three issues considered a priority by the Front: family agriculture and its decisive weight in guaranteeing the right to food and food sovereignty; schools meals as an essential tool in the fight against hunger; and the new challenges presented by overnutrition, a form of malnutrition.

One of the last fronts formed in the region was Peru’s. After a year of work, it got the single-chamber Congress to approve a law on family agriculture. But it has not yet managed to push through two other draft laws, on food security and school meals.

Despite the difficulties, “the fact that parliamentary fronts have been set up throughout Latin America and that today we are the headquarters of that front is representative – it is recognition that we are a country with great diversity,” the coordinator of the Peruvian front, Jaime Delgado, told IPS.

Delgado said they have been working together with civil society on issues like agriculture and food controls under the question of hunger or malnutrition.

In Peru, more than 90 percent of agricultural producers are family farmers and 75 percent of the food consumed is grown on farms less than five hectares in size, said Arboccó, the anthropologist, based on statistics from the 2012 agricultural census.

Although hunger levels have been significantly reduced in Peru according to FAO, there are still 2.3 million hungry people in this country of 30 million.

Poverty affects 33.8 percent of the population in Peru’s Andean highlands, 30.4 percent in the jungle region, and 14.3 percent in the coastal areas, according to 2014 figures from the national statistics institute.

“As an indigenous woman, I am now in Congress, insisting on issues like food sovereignty, family farming, climate change, and healthy eating,” Claudia Coari, a congresswoman for the southeastern department of Puno, told IPS.

“So this is a strength that we are just starting to take into account,” said the lawmaker, who forms part of Peru’s parliamentary front.

Coari said the Forum to be held in Lima is an opportunity to “learn from other countries that have already made progress” and to reinforce what has already been done in Peru. “Now we have to all work together,” she said.

With additional reporting from Aramís Castro in Lima.