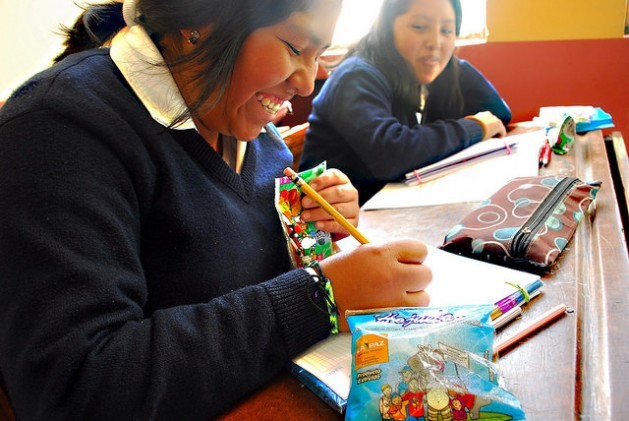 A student at the Unidad Educativa La Paz school drinks fruit juice from a package distributed by the municipal government’s Complementary School Food Unit, which delivers 26 tons of natural products based on traditional grains and other ingredients to some 140,000 students. Credit: Franz Chávez/IPS

LA PAZ, Mar 7 2015 (IPS) - A successful school meals programme that serves breakfast and lunch with Andean flavours to 140,000 students in La Paz gave rise to a new law aimed at promoting healthy diets based on local traditions and products in Bolivia’s schools, while combating malnutrition and bolstering food sovereignty.

“We want fruit on Wednesdays!” shouted the students in a classroom in the Unidad Educativa La Paz school, when IPS asked for their suggestions to improve the meals they receive as part of the Complementary School Food Unit (ACE), a national programme.

A demand like this for healthy food, coming from youngsters, would have been unthinkable just a few years ago.

The model for ACE was a school breakfast that began to be served in 2000 in this city, the seat of government of Bolivia, and grew into an innovative meals programme based on nutritious locally-grown natural food for children and adolescents studying in the public schools in the biggest of this country’s 327 municipalities.

The United Nations World Food Programme (WFP) and Food and Agriculture Organisation (FAO) and other international institutions have praised the result of the initiative in various reports.

Every day, from dawn to dusk, some 26 tons of food and beverages are distributed from production centres located in Bolivia’s highlands, more than 4,000 metres above sea leavel, or in the valleys and tropical areas of the department of La Paz. The school meals programme has thus bolstered both employment and trade.

“We are leaders in producing school meals with Andean foods like amaranth, fava bean flour and quinoa,” the city government’s director of education Jorge Gómez told IPS with evident enthusiasm, in the austere office where he coordinates the meal plan for public school students between the ages of five and 15.

The high-protein amaranth and quinoa grains formed the foundation of the diet of the pre-Columbian cultures of South America’s Andean region.

Among the positive results: In the first eight years of the programme, anemia fell 30 percent among public school students in the municipality, according to independent studies by the Mayor de San Andrés University and the international organisation Save the Children.

ACE, which was established in the primary and secondary public school system nationwide in 2005, is run by special municipal units. In 2013 it reached two million students in this country, according to the Education Ministry, which is responsible for the programme.

The initiative not only improved the eating habits of students, but gave a boost to small-scale community agriculture.

In addition, it gave rise to the “law on school meals in the framework of food sovereignty and a plural economy” which went into effect on the last day of 2014, banning transgenic and packaged foods in schools and stipulating that they be replaced by traditional Andean foods, most of which are locally produced, starting this year. 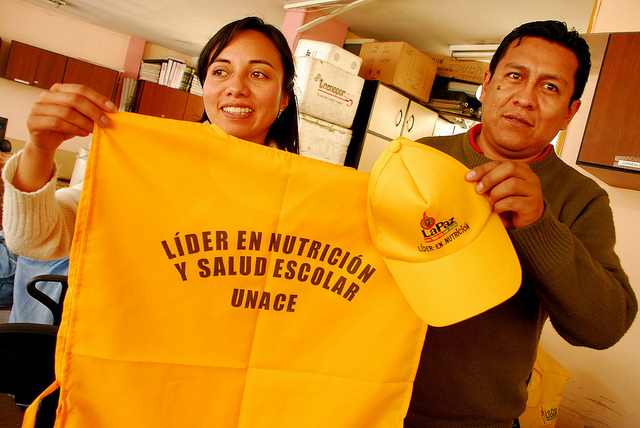 Professionals with the city government’s Complementary School Food Unit show the uniform to be worn by the students trained as “leaders in school nutrition and health” in the city’s schools. Credit: Franz Chávez/IPS

Gómez explained that he talks to fathers and mothers to improve the family diet, and that a variety of products are included in the meals and snacks distributed in the 389 schools in La Paz run by the central and municipal governments, in the morning, afternoon and evening shifts.

With its new law, Bolivia became the third Latin American country to have specific legislation on school meals, after Brazil and Paraguay, according to FAO, which reports that other countries moving in that direction are Costa Rica, Dominican Republic, El Salvador, Guatemala and Nicaragua.

“Bolivia’s law became part of the regional efforts towards healthy diets in schools, which take into consideration the cultural and productive diversity of countries and give greater value to products from family farms. It is a fundamental step for this kind of programme to become state policy,” said FAO food security official Ricardo Rapallo.

A FAO study carried out in eight countries of the region found that school meal programmes reduce dropout rates and improve learning, and that their success is based on the fact that they involve the public authorities, the educational community, families, organised civil society, and international institutions.

As they eat snacks and drink natural fruit juice from colourful packages, the students in the school visited by IPS say the chocolate-covered granola bars are their favourites.

The bars, made with cacao from the semi-tropical northwestern department of La Paz, are highly popular, and the day of the week they are included in the snack there is not enough for everyone because some students take several portions, the school principal, Marcela Fernández, told IPS.

The school meals provide one-fourth of the daily nutrients needed by a child or adolescent, and include milk, yoghurt, fruit juice and chocolate, to which iron, folic acid, and vitamins A, B and C are added.

The school’s gym teacher, Hugo Quito, said the students have more energy now, because of the healthy meals.

The meals are the result of innovative and creative production and planning using products with Andean flavours, such as corn bread and buns made with other native grains, baked with eggs, oats and almonds, and steam-cooked quinoa biscuits called“k’ispiña”.

The biscuits revive an Andean tradition of old, when they were used as non-perishable food on long treks or during periods when food was scarce.

Each combination of ingredients was created by the city’s nutritionists, who are focused on reducing anemia among students. But the task is not always easy. One example was an “empanada” – a stuffed bread or pastry – with a filling of chard, which a group of parents complained about because they thought the green colour of the leafy vegetables was from mold.

A boost to agriculture

The boom in demand for natural foods also had a positive side effect, triggering a productive revolution of Andean grains, bananas and other fruits, which are now being produced in an organised manner by farmers grouped in companies and cooperatives.

Every day, from dawn to dusk, some 26 tons of food and beverages are distributed from production centres located in Bolivia’s highlands, more than 4,000 metres above sea leavel, or in the valleys and tropical areas of the department of La Paz. The school meals programme has thus bolstered both employment and trade.

The positive impacts on the health of schoolchildren and the revival of natural, Andean foods, along with the boost to community agriculture, served as a guide for the national law when it came to drawing up the new guidelines for ACE, for the meals distributed in public primary and secondary schools.

The new law is also in line with objectives set out by the government of President Evo Morales, in office since 2006, which promotes the integral concept of “Vivir Bien” – roughly “living well” – as the crux of its social policies.

The law is aimed at keeping children in school, fomenting agricultural production by giving top priority to locally produced ingredients, guaranteeing natural food products that are close to the local culture, and promoting community farming.

Meanwhile, the Complementary School Food Unit of La Paz has entered another pioneering phase: training leaders in nutrition, with the participation of teachers, parents and students, who are given uniforms and caps after undergoing training.

These leaders help raise awareness on healthy eating habits, nutrition and prevention of health problems in their schools and among the broader community. “We are promoting change, at the level of families and schools,” one of the technical experts in charge of the programme, who preferred to remain anonymous, told IPS.