Stories written by Franz Chávez
Franz Chávez has been an IPS Correspondent from Bolivia since November 2003. He covers Bolivian current affairs and the country’s dynamic transition from market-oriented government to government supported by indigenous people and low-income sectors of society. To provide adequate coverage of the complex Bolivian reality, especially for an international audience, Chávez tends to focus on those stories generally neglected by mainstream media, putting a special effort into contextualising events in what is currently one of the poorest countries in Latin America. Born in La Paz, Chávez worked for Radio Christal from 1985 to 1990, then joined the editorial team of the local television channels 2, 4, 7 and 11. He is also among the founders of the daily newspapers La Razón, where he worked from 1990 to 1995, La Prensa, where he worked from 1998 to 2001, and La Prensa-Oruro. Chávez studied sociology and communication at the Universidad Mayor de San Andrés de La Paz. 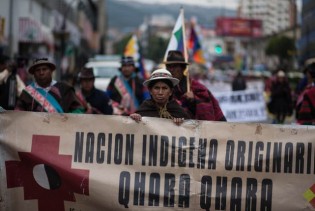 By Franz Chávez
Ana Chipana, from Bolivia, did not like eating quinoa when she was a girl. But this grain-like crop native to the Andes was her ticket to becoming a successful entrepreneur who has visited NASA and the United Nations.

By Franz Chávez
Bolivia’s sugar mills are once again operating at full capacity, with producers flooding the domestic market and desperate to obtain permits to export a surplus of 138,000 tons to Chile, Colombia, Peru and the United States.

By Franz Chávez
The effects of climate change are causing hundreds of millions of dollars a year in losses of crops, livestock and housing in Bolivia. But the few climate change adaptation and prevention policies adopted by the authorities are piecemeal and fragmented, experts say.

By Franz Chávez
Snow-capped mountains shrouded in clouds tower over the ninth gruelling march of indigenous people from Bolivia's eastern lowlands to the seat of government, to challenge the government's environment policy and protest the construction of a road through a protected area of rainforest and water reserves.

By Franz Chávez
Almost six years after the nationalisation of gas and oil reserves in Bolivia, foreign companies maintain an active presence in the sector, and the government is now offering them greater incentives to increase oil production.

By Franz Chávez
Small-scale dairy farmers in this remote area of Bolivia's northeastern Amazon region of Beni have a new hope for protecting their livestock from the fierce annual floods that start in December.

By Franz Chávez
Margarita Amabeja holds out her hands full of golden rice grains and rough brown manioc roots - the first results of a strategy to adjust the agricultural cycles to the seasonal floods and droughts in the vast plains of Beni, in northeastern Bolivia.
Next Page »
ADVERTISEMENT ADVERTISEMENT