This year’s sugar cane harvest in Bolivia is raising hopes in the sector, but further expansion will require more beneficial domestic and international conditions. 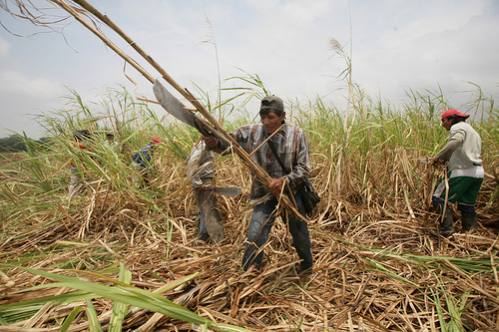 LA PAZ, Nov 13 2012 (IPS) - Bolivia’s sugar mills are once again operating at full capacity, with producers flooding the domestic market and desperate to obtain permits to export a surplus of 138,000 tons to Chile, Colombia, Peru and the United States.

The low point for sugar producers, marked by scarcity, speculation and smuggling, was in 2010, and remains a bad memory for this newly blossoming agroindustrial sector in the eastern department of Santa Cruz, home to four of the country’s five sugar mills: Guabirá, La Bélgica, San Aurelio and Unión Agroindustrial de Cañeros (Unagro).

The fifth, Industrias Agrícolas Bermejo Sociedad Anónima, is located in the region of Bermejo, in the southern department of Tarija.

This year, sugar production in Santa Cruz is expected to total 11 million quintals (506,000 tons). In Bolivia, the quintal, equivalent to 46 kg, is the unit of weight used for products like sugar.

Once domestic demand is met, a surplus of approximately three million quintals (138,000 tons) will remain. But according to the general manager of Unagro, Marcelo Fraija, “only one million can be exported with the government’s authorisation.”

A study conducted in 2010 found that investment in the sector in land, crops, industrial facilities, farming machinery and infrastructure totaled some 500 million dollars, said Andreas Noack, the manager of Social Responsibility at the Bolivian Foreign Trade Institute (IBCE).

Abrupt changes in weather patterns in the nine provinces of Santa Cruz, where 131,600 hectares of sugar cane are grown, led to a drop in production, and the government was forced to intervene in the market.

Domestic consumption that year was estimated at 345,000 tons, but the authorities deemed it necessary to impose price controls. The prices set for the Bolivian market were lower than those being charged in neighbouring Peru, and large quantities of sugar ended up being smuggled across the border.

With the domestic supply running out, the government prohibited exports and began to import sugar from Colombia. But the situation was finally resolved when the government backtracked and set a wholesale price closer to what the market-driven price would have been, and conditions returned to normal.

“We will never see a repeat of this period,” when imports were agreed upon by the government and producers as a means of “protecting food security,” Fraija told Tierrámerica*.

But the regulation of exports remains intact, for the purpose of guaranteeing the domestic supply, and sugar producers are calling on the Ministry of Rural and Agricultural Development to lift these restrictions.

“We are happy with the 2012 harvest,” which benefited from good weather conditions and loans granted by the government to sugar producers with terms of up to four years and guarantees from companies and unions, said Hugo Gutiérrez, former president of the Union of Sugar Cane Producers of Santa Cruz.

The harvest began in May, and attracted around 2,000 cane cutters and their families from the cold high plains of the Andes in western Bolivia to the sugar cane plantations of the eastern region, divided among roughly 3,500 landowners.

This year these seasonal workers were paid between 4.3 and 4.6 dollars for every ton of sugar cane cut. But when labour is scarce, plantation owners have been forced to pay up to five dollars and use machinery, Gutiérrez told Tierramérica.

Some plantations are up 500 hectares in size, but small producers grow sugar cane on parcels of between 20 and 300 hectares. The harvest is moving ahead full steam and will continue until late November, when the rains interrupt work in the cane fields.

“The government was right to be concerned over the amount of sugar leaving the country when prices were low,” Mariano Aguilera, the former president of the region’s largest sugar mill, Guabirá, told Tierramérica. But “today is different and clear trade policies are needed,” he said.

Producers have made sacrifices to transform their crops and adapt them to capricious climate conditions, said Gutiérrez. “On the one hand, the government helps us out with financial support, but on the other, it closes the doors to exports.”

Sugar producers are now facing an even bigger problem: international sugar prices are dropping. The world market price has fallen from 800 dollars a ton at the beginning of the year to 500 dollars, stressed Fraija.

In Bermejo, 1,165 km south of La Paz, despair is growing among producers due to the small amount of sugar sold on the domestic market and the lack of demand for the growing stored reserves.

Given this situation, a bill signed into law on Nov. 10 to create a tax to finance scientific research on sugar cane has met with fierce opposition.

The Sugar Cane Producers Union of Guabirá set up roadblocks on highways in Santa Cruz to protest the proposed tax on producers of 0.007 Bolivian pesos per liter of alcohol and 20 cents per quintal of sugar.

Producers see the measure as a duplication of efforts. A Centre for Research on Sugar Cane Technology Transfer has already been operating at the Guabirá Sugar Mill for a number of years.