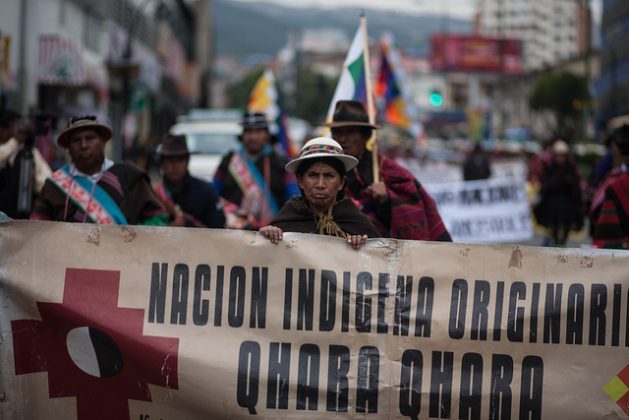 After a nearly 700-km march that took 41 days, members of the Qhara Qhara nation reach the city of La Paz on Mar. 18 to demand legal changes that would guarantee the land rights of the country's 36 native peoples. Credit: Gastón Brito/IPS

LA PAZ, Apr 2 2019 (IPS) - The ancient Qhara Qhara nation began a battle against the State of Bolivia in defence of its rich ancestral lands, in an open challenge to a government that came to power in 2006 on a platform founded on respect for the values and rights of indigenous peoples.

Men and women from the Qhara Qhara indigenous people marched nearly 700 km over the space of 41 days, between the official capital, Sucre, and La Paz, the country’s political hub, to protest that the fragmentation of their ancestral lands threatens their culture.

They now hope that in two months the measures and laws governing this question will be modified.

Meanwhile, the demonstrators, who marched from the Andes highlands and valleys of the south of the country and reached La Paz on Mar. 18, began to return a week later to their home villages, after declaring that they would put their mobilization on hold until July, while their leaders monitor the progress of legislative changes that protect their rights and land.

Legislative committees received three bills that, in coordination with the government, will study the demands of the Qhara Qhara people, which include the restitution of ancestral territories, respect for indigenous justice systems, and respect for their autonomy.

In an interview with IPS, Martha Cabrera, a “kuraca” or traditional authority of the Qhara Qhara nation, said a law should be created that recognises indigenous peoples’ right to their ancestral lands, as delimited in coordination with the leadership of native communities.

Article 2 of the constitution recognises indigenous peoples and their territories.

The constitution, approved in 2009, declares Bolivia a “plurinational State” and recognises the country’s indigenous peoples as nations – one of the promises made by President Evo Morales, who belongs to the Aymara indigenous community and has been in power since 2006.

An example of breached promises

To illustrate, Cabrera cited a recent land conflict which she said exemplifies the situations experienced by her people.

Staff from the state-run National Institute of Agrarian Reform (INRA), responsible for legalising land titles to rural properties, made an unwelcome visit to the town of Quila Quila on Feb. 27, with police backup.

“Forty police officers and 150 other people ambushed the local inhabitants” to facilitate land measurements requested by ‘third parties’ [people outside the community],” Cabrera complained, referring to an incident that occurred while the march reached the city of Oruro, historically a hub of Bolivia’s social struggles.

Quila Quila is located southwest of Sucre, which is the capital of the department of Chuquisaca, one of the nine into which Bolivia is divided.

“We don’t want confrontations and the townspeople don’t want the land to be handed over,” said Cabrera.

After turning to the justice system in vain for an explanation for the police presence at the scene of the conflict, the lack of answers indicated to Cabrera and other leaders of the march that the order came from high up in the government.

In response to the accusations, the national director of INRA, Juan Carlos León, said that 90 percent of Quila Quila’s residents want individual titles to their land, and only 10 percent are demanding the recognition of collective ownership.

Located between the departments of Potosí and Chuquisaca, the Qhara Qhara – which in the ancient Qaqina language means two hills – people have been fighting for recognition of their culture since 2002, together with the Pikachuri and Qaqina peoples, former “kuraca” Samuel Flores told IPS.

Flores, who like Cabrera is a spokesperson for his nation and an organiser of collective initiatives, explained that the Qhara Qhara people currently number 48,000, distributed in eight “markas” (indigenous territorial units).

Sociologist Arturo Villanueva, an expert on indigenous nations and land agrarian issues, told IPS that what happened in Quila Quila is part of “a setback” in the enforcement of constitutional articles and respect for the collective rights of indigenous peoples.

As a precursor to the Qhara Qhara march, he cited an August 1990 march by indigenous peoples from the tropical rainforest in the department of Beni, when they trekked 600 km to protest “the structural bases of the colonial institutionality represented by the monocultural, discriminatory and exclusionary neoliberal and republican State.”

Morales capitalised on those demands to become the country’s first indigenous president. He then channeled them to a Constituent Assembly that in 2008 completed the drafting of the new constitution, which since 2009 has been the framework for the promised restitution of indigenous rights.

But today the constitution and plurinationalism itself are in serious danger with regard to the rights of indigenous peoples, who make up a majority of the population of just over 11 million people.

This ethnically diverse landlocked South American country is home to 36 recognised native peoples, the largest of which are the Quechua, Aymara and Guaraní.

Flores explained that in 2012, the “markas” and “ayllus” (enlarged community) that make up the Qhara Qhara nation began to struggle against domination by peasant unions that have the backing of the government and observe with interest the acquisition of portions of land in their territory.

Cabrera and Flores said the Qhara Qhara people produce food, conserve thermal and fresh water sources, and have abundant minerals under their land, such as gold, iron, zinc and tin.

Cabrera said the “outsiders” are city dwellers and, in other cases, are children of the “Yanaconas,” people in the service of landowners prior to the agrarian reform, who are trying to dispossess indigenous peoples of their lands with the help of INRA.

The aim, she said, is to obtain rural property with individual titles in order to commercialise the land and not use it for crops.

The indigenous leader said their struggle for legislative changes will favour other native groups who are demanding the restitution of their lands and the recognition of indigenous judicial authorities.

“During the Spanish colonial era we obtained respect for our ancestral lands and now we are seeking respect for the plurinational State of Bolivia,” she said.

Cabrera said her nation, thanks to the strength of its culture, has now taken the lead among Bolivia’s 36 indigenous peoples, which are identified by their culture, customs, traditions and geographical location in the national territory.

She said the legal changes that they are demanding are for the benefit of all 36 native peoples, and that on Jul. 21 the progress of their proposals will be assessed.

If the results are not satisfactory, she explained, a national mobilisation “of all indigenous peoples and nations” will be called, to mount pressure until their demands are met.

Villanueva says that underlying the land grab in indigenous communities is an interest in destroying nature and “imposing unbridled extractivism” of natural resources that will result in the displacement of local populations, threatening the very survival of native communities and cultures.

He described the struggle of the Qhara Qhara nation as the “final opportunity to preserve hope” and the harmonious relationship between human beings and their natural environment.

During the march, intellectuals, academics and international organisations signed a letter of support “for the native nations and indigenous peoples of Bolivia and the different countries of South America, for their struggle for land and for their right to self-determination, autonomy and restitution of their political authorities and ways of life.”