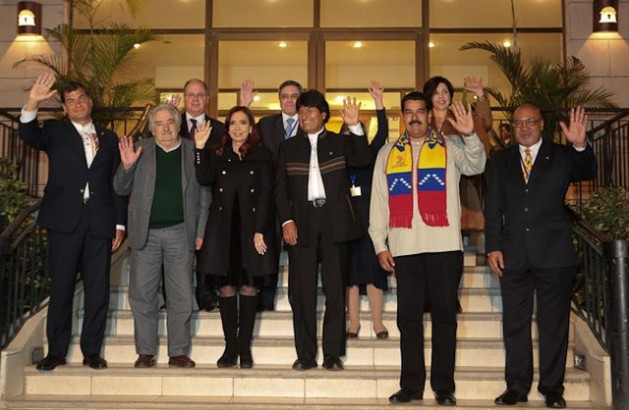 LA PAZ, Jul 5 2013 (IPS) - South American leaders demanded that the governments of France, Italy, Portugal and Spain provide explanations and public apologies to Bolivian President Evo Morales for refusing his presidential jet permission to fly through their airspace on his way home from Moscow.

Five presidents and other high-level representatives of the members of the Union of South American Nations (UNASUR) who held an extraordinary meeting Thursday in the central Bolivian city of Cochabamba said the denial of access to the four European countries’ airspace was a violation of Morales’ rights and immunity and of international law, and set a “dangerous precedent”.

They also decided to create a commission tol follow up on the formal complaints that will be brought before the United Nations and other international bodies.

The declaration was not signed by UNASUR as a bloc but by presidents Rafael Correa of Ecuador, Cristina Fernández of Argentina, Nicolás Maduro of Venezuela, José Mujica of Uruguay and Desiré Bouterse of Suriname, as well as delegates of the governments of Brazil, Colombia, Chile, Guyana and Peru. Paraguay did not take part in the meeting because it is still suspended from the bloc as a result of the ouster of President Fernando Lugo in June 2012.

Although UNASUR announced Wednesday night that a summit would be held, the bloc failed to cobble together a quorum, and was unable to issue a declaration as a bloc, which would have required a consensus among the region’s 12 presidents.

Brazilian foreign policy adviser Marco Aurélio Garcia said President Dilma Rousseff was unable to make it to the meeting. Unofficial reports indicated that she did not attend because of the protests that have been raging in Brazil for the past two weeks.

In a communiqué isused Wednesday, Rousseff had expressed her “indignation” over the incident, saying it not only affected Bolivia but Latin America as a whole. Similar sentiments were expressed by presidents Ollanta Humala of Peru, Juan Manuel Santos of Colombia, and Sebastián Piñera of Chile.

Nevertheless, the absence of the four leaders was interpreted by some as a breakdown in relations among the members of UNASUR.

“What happened to Morales in Europe and the absence of some of the presidents sent out a harsh message to the countries of ALBA (Bolivarian Alternative for the Peoples of Our Americas) because of their policies of nationalisation of companies, mistreatment of ambassadors and incompliance with international agreements,” lawmaker Luis Felipe Dorado, with the centre-right opposition National Convergence party, told IPS.

As an example, he cited Morales’ proposal to withdraw Bolivia from the Inter-American Human Rights Commission.

Dorado also lamented that the president said Bolivia could do without the World Bank or the International Monetary Fund.

From pressure to protests

Prior to the meeting in Cochabamba, Fernández, Correa, Maduro and Bouterse took part in a rally in solidarity with Morales held by Bolivian social organisations.

In the rally, Morales – Bolivia’s first-ever indigenous president – said Spain’s ambassador to Austria had demanded to be allowed to inspect the presidential aircraft, while the Bolivian leader was in the Vienna airport from Tuesday evening to Wednesday morning.

His presidential jet has been rerouted and forced to land in Vienna, where it was grounded for 14 hours waiting for France, Italy, Portugal and Spain to revoke their airspace decision.

The incident was sparked by the suspicion that the plane was carrying whistleblower Edward Snowden, the former technical contractor for the U.S. National Security Agency (NSA) who released dozens of top secret documents proving that the U.S. government has been tapping global internet and phone systems on a massive scale,

The Bolivian president said the Spanish ambassador, under orders from the deputy foreign minister of Spain, attempted to force his way onto the aircraft to make sure Snowden was not there.

Morales said he told the ambassador he was a president, not a “criminal” whose plane had to be inspected before it was allowed to continue its journey.

Argentine President Fernández said at the rally that “It is curious that the countries that talk about legal security and respect for international law and human rights have committed this unprecedented violation. They should apologise for once.”

Mujca said the four European governments had made an enormous mistake. “This is embarrassing for the old countries…we aren’t colonies. When one Latin American leader is insulted, we all feel insulted.” He called for apologies instead of “unfounded arguments.”

Maduro concurred. “This is abuse and contempt of Latin America’s people because we decided to be free and to carry out democratic revolutions,” he said, after accusing the U.S. Central Intelligence Agency (CIA) of organising the rerouting and grounding of Morales’ jet.

Correa also accused the “intelligence agencies” of the countries involved in the incident of coordinating the denial of access to their airspace. He also blamed Washington, and said the reactions against the countries governed by leaders and parties of “a new left” in Latin America were triggered by their “anti-colonialist stance.”

While the South American leaders were in Cochabamba, Morales supporters protested outside the embassies and consulates of France, Italy, Portugal, Spain and the United States.

In Santa Cruz de la Sierra, members of the ruling Movement to Socialism painted graffiti on the walls of the U.S. consulate.

Popular demands that the ambassadors from the four European countries be expelled found little echo among the ranks of the ruling party. But Morales said he would not be afraid to close down the U.S. embassy, because he had no doubt U.S. pressure was behind the “virtual kidnapping” of which he was victim.