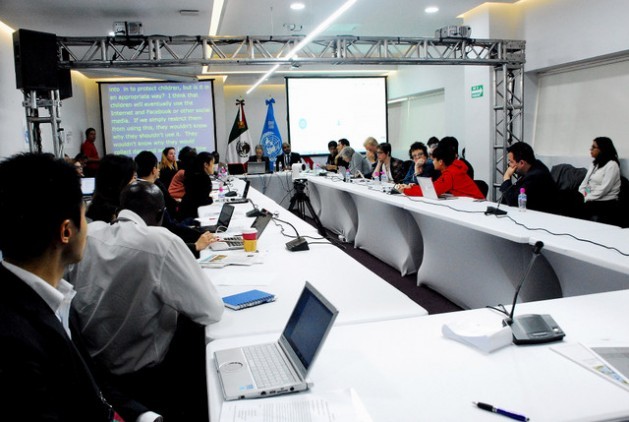 Experts and adolescents during a workshop about the risks of internet for children and young people, as part of the 2016 Internet Governance Forum (IGF2016), held in Zapopan, in eastern Mexico. Credit: Franz Chávez /IPS

ZAPOPAN, Mexico, Dec 27 2016 (IPS) - Email surveillance, blocking of websites with content that is awkward for governments, or the interruption of services such as WhatsApp are symptoms of the threat to freedom of expression online, according to Latin American activists.

Representatives of organisations in the region participated this month in Zapopan, on the outskirts of the Mexican city of Guadalajara, in the Internet Governance Forum (IGF 2016), an initiative formally established by the United Nations Organisation in 2006. They discussed the problems facing freedom of speech on the social networks.

A total of 12 Mexican civil society organisation highlighted the situation in their country, which is similar to that of other countries in the region.

“There are no hegemonic standards or models of legislation for the information society. Every region, country, government and key actor makes decisions in accordance with their own financial and technical possibilities, political will and digital culture, which it is necessary to work on.” -- J. Eduardo Rojas

In a statement they denounced the interception of communications and the use of malware “to silence journalists and political opponents”.

“Mexican authorities intercept private communications” and 99 percent of the geolocalisation and obtaining of people’s digital identity (metadata) ”are done without a judicial order,” they stated in the document, issued by the Mexican branch of Article 19, a Paris-based international organisation for the defence of freedom of expression.

“Civil society actors are very worried” with regard to the surveillance that the new technologies allow “and the possibility of intercepting our computers and telephones, where we leave a digital fingerprint when we look for news or use our email,” Edison Lanza, special rapporteur for Freedom of Expression of the Inter American Commission on Human Rights, told IPS.

Article 19 of the Universal Declaration of Human Rights, in force since 1948, states that “Everyone has the right to freedom of opinion and expression; this right includes freedom to hold opinions without interference and to seek, receive and impart information and ideas through any media and regardless of frontiers.”

“Three years ago, someone hacked into my email account and made my list of contacts public,” Martha Roldos complained to IPS. She is executive director of the Ecuadorian Foundation 1000 Pages, which researches and promotes accountability of civil servants towards the community.

She described challenges faced by activists, including espionage or interception of email messages, and mentioned government actions such as employing facial and voice recognition equipment for people involved in journalism or environmental activism.

In Brazil, the mobile text messaging app WhatsApp was interrupted on four occasions over the last two years by judges who demanded that conversations be revealed as part of investigations – a measure that was condemned by Artigo 19, Articulo 19’s local branch.

“The court ruling is disproportionate and is a direct attack on freedom of expression. The measure represents a blatant violation of principles and of the proportionality that judicial rulings should have,” said Artigo 19 in defense of millions of Brazilian citizens who use the popular app.

Ana Ortega, the head of the Freedom of Expression Committee (C-Libre) in Honduras, told IPS that among the many incidents against freedom of expression was the arrest of and prosecution against Elvin Francisco Molina for allegedly spreading false information on his Facebook page about the country’s banking system.

Accused of causing “financial panic in the social networks,” Molina was investigated by order of the National Council of Defence and Security. C-Libre expressed concern over the “criminalisation” of the use of social networks in the draft of a new Criminal Code which is being debated by the National Congress.

In Honduras, “there is no law to protect internet users and we take refuge under the right to freedom of expression and the 2006 law on access to information,” explained Ortega.

The report “Surf Freely”, carried out by the Venezuelan Press and Society Institute in several of that country’s states before and after the December 2015 parliamentary elections, concluded that web pages that were blocked belonged to companies that had provided information about the exchange rate of the dollar.

It was also established that other blocked websites were media outlets and blogs critical of the governing United Socialist Party of Venezuela and the administration of President Nicolás Maduro.

Yvana Novoa, a lawyer for the Peruvian organisation Anti corruption and Freedom of Information (Liber), documented cases in which users were blocked from accessing the Facebook account of the city of Lima. Also, “some public officials such as ministers have blocked users who criticise them on Twitter,” she told IPS.

Article 2 of Peru’s constitution recognises the right to freedom of information, opinion, expression and dissemination of thought through written or oral means, or images, through any social means of communication, without previous authorisation or censure.

But “there is no criminal penalty when a user is blocked by official social networks accounts,” said Novoa.

The blocking of sites as a form of censorship on the Internet is not very effective because the message will just be multiplied over the social networks, said Javier Pallero, an Argentine analyst for the international digital rights defence organisation, Accessnow.

Beyond that, it represents an action that stifles the debate needed to strengthen democracy, he told IPS.

Censorship on the internet “is a deplorable act by people who fear the power of information,” said David Alonso Santivañez, a Peruvian expert on digital legislation.

In any case, in his opinion, the capacity of social networks to multiply a message some 60 million times in a minute calls into question the possibility of true censorship of people’s communication.

What is needed, the expert told IPS, is to create laws that guarantee the use of the service, offer security and are the result of teamwork between civil society, legal experts and governments.

“Judges and prosecutors are the ones that have to investigate these kinds of abuses and interference in the private lives of journalists, activists and political leaders. If they detect illegal interference with no judicial order, without any legitimate objective, they must sanction this kind of offence,” urged IACHR rapporteur Lanza.

In a world dominated by the information society, the paradigm of self-regulation makes it necessary for “multi sectoral stakeholders to establish an informed and intelligent dialogue in order to define approaches, methods and techniques to face the challenges of an increasingly digitalised society,” J. Eduardo Rojas, a Bolivian expert who heads the Networks Foundation, told IPS.

“There are no hegemonic standards or models of legislation for the information society. Every region, country, government and key actor makes decisions in accordance with their own financial and technical possibilities, political will and digital culture, which it is necessary to work on,” he said.