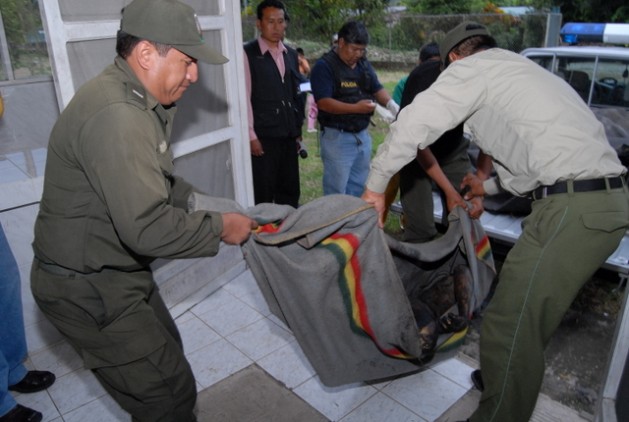 Police officers carry the charred remains of a lynch mob victim in a community in Chapare in the Bolivian department of Cochabamba. Credit: Courtesy of Dico Soliz/Opinión

It is vigilante justice in impoverished rural and urban areas that has nothing to do with indigenous community justice, which the perpetrators invoke to justify their actions.

According to statistics provided to IPS by the Defensoría del Pueblo – the ombudsperson’s office – between 2005 and October this year 53 cases of lynchings, possible lynchings, attempted lynchings and threats of lynching were documented in seven Bolivian cities: La Paz, El Alto, Cochabamba, Chapare, Cobija, Potosí and Llallagua.

But a count based on cases covered by the media from 2005 to 2012 indicates that 180 people were lynched in this South American country during that time.

And the phenomenon is on the rise: media reports indicate that 35 people were killed by lynch mobs between April and August this year alone. Of these killings, 14 happened in the western department of La Paz – most of them in the vast working-class city of El Alto, next to the city of La Paz – and 11 occurred in the department of Cochabamba.

It is in this central department that the barbarity of lynchings is at its worse, according to sources with the police and the press, especially in the tropical coca-producing province of Chapare, where a majority of the population is Quechua while the country’s second-largest indigenous group, the Aymara, has a growing presence.

This country of 10 million people is basically divided between the western highlands, home to the impoverished indigenous majority, and the more ethnically mixed and wealthier eastern provinces.

Two bodies appeared Sept. 27 in Entre Ríos, a small town in Chapare province. The two young men had been burnt, their feet and hands bound with barbed wire and their faces unrecognisable.

According to reports from the small town, two unidentified men between the ages of 25 and 30, who had taken a motorcycle taxi, awakened the driver’s suspicions because one of them was armed.

In a confusing incident, the gun went off, and local residents started beating the two young men who they suspected of trying to rob the driver. They then tied them to posts and burnt them alive, using fuel and rubber tires to feed the flames.

The crowd involved in the lynching, written off locally as another instance of “community justice”, have been protected by a cloak of silence.

“Lynching is murder, and it cannot be permitted under the concept of community justice, because it has nothing to do with it; it is a summary execution that violates constitutional principles and due process,” the departmental prosecutor Freddy Rorrico told IPS.

But lynchings do not figure as crimes under local jurisdiction, and the fact that the killings are collective – and collectively silenced – hinders investigations.

In La Paz, the national ombudsman Rolando Villena told IPS that “the ordinary justice system should be more efficient, effective, transparent and timely,” to prevent locals from resorting to summary executions in a country where the death penalty does not formally exist.

Police citizen security plans should be expanded to rural areas, he said.

But above and beyond the inefficiency of the courts, “there is a strong component of mistrust in, lack of knowledge and familiarity with, and rejection of the justice system and the police among rural communities and poor populations,” he said.

The face of justice in Bolivia began to change after the new constitution went into effect in 2009, declaring the country a “plurinational state” – a recognition of the indigenous majority, who have historically suffered from discrimination and racism.

The constitution also made it possible for voters to elect members of the highest level courts and judicial councils.

Articles 191 to 193 mention rural indigenous jurisdiction and establish that native communities can administer justice according to their own rules and procedures.

But that jurisdiction, which has to respect the ordinary justice system, “respects the right to life and the right to defence and the rest of the rights and guarantees established in the constitution,” the articles add.

The constitution thus recognised and revived the practice of indigenous justice administered by local leaders – although rural communities already meted out justice according to their customs and traditions before the new constitution went into effect.

In public assemblies, community leaders are informed of and analyse the crime – generally involving the theft of livestock, seeds or other property – and apply reparative sentences, which almost always involve manual labour, she told IPS.

In more extreme cases, such as aggravated theft, the perpetrator and his or her family are banished. “That is the maximum penalty,” Irrazábal told IPS.

Cases of murder, rape and other serious crimes are referred to the police and the ordinary justice system, she said.

Ombudsman Villena attributed the lynchings to “the lack of protection, the slow pace at which the security bodies work, the inefficiency of the state, the crisis of the judicial system, and the high levels of impunity.”

He showed IPS the results of internal investigations that indicate that “45 percent of Bolivia’s municipalities have no judge, only 23 percent have a prosecutor, and a mere three percent have a public defender.”

Félix Costa, mayor of Puerto Villarroel, one of the five municipalities that make up Chapare province, told IPS that lynchings were due to “the failure to administer justice properly.”

According to Costa, the people in his town of 46,000 get angry when the police or the courts fail to punish suspected criminals.

In Puerto Villarroel, an area of intense trade and a hub linking road traffic between eastern and western Bolivia, there are only 20 police officers in charge of public safety, traffic and the fight against drugs.

Cochabamba prosecutor Torrico acknowledged that there are difficulties in administering justice. “I have only three prosecutors to deal with a number of crimes, and three specialised in anti-drug questions,” he said, to illustrate the weak state of the public prosecutor’s office in a conflict-ridden area.

But collective fury cannot override respect for life, he said. “The theft of a motorcycle is not comparable to setting someone on fire,” he stressed.

Victims are frequently burnt, alive on some occasions, to eliminate all evidence of lynchings, which are also committed in poor districts on the outskirts of cities.

On Nov. 4, in Sorata, a small town in the department of La Paz, a mob dragged a 25-year-old man out of his house because he was suspected of killing a local shopkeeper. He was beaten unconscious, left in a ditch, and the next day poisoned and hanged.