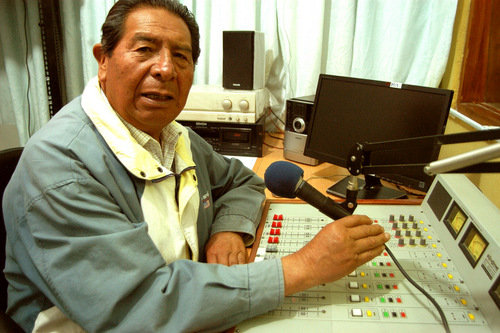 EL ALTO, Bolivia, Dec 7 2012 (IPS) - Every morning from 6:00 to 8:00 AM, native people in this sprawling working-class suburb of La Paz, Bolivia listen to the programme broadcast by former education minister Donato Ayma in the Aymara language.

He starts his programme every day on the local Atipiri radio station saying “Mä amuyuki, mä ch’amaki” (“with one single thought, one single force,” in Aymara).

In an interview with IPS, Ayma explains the importance of the radio to Bolivia’s predominantly indigenous rural highlands population.

Ayma, one of Bolivia’s best-known native broadcasters, says “the radio is still the most accessible and easily operated media” in this geographically diverse country of high mountains peaks, altiplano, valleys, lowlands and Amazon jungle.

He describes campesinos ploughing their steep fields in the bleak Andes highlands, where the ploughs are still pulled by oxen, accompanied by the songs on their portable radios.

“The young women prefer to hear programmes in their mother tongue – they’re bilingual, but they tend to choose music that reflects the thinking and experiences of their people,” he says, describing life in the highlands.

Electricity is often unavailable and newspapers rarely reach remote villages, where the radio is listened to “by illiterate people; people can listen to each other, using their ears.”

The Aymara academic and researcher describes his childhood in the frigid altiplano, in Toledo, a village in the western department or province of Oruro. That is where he began his career behind a microphone, in 1969, and began to develop what he calls a New Model of Communication (NUMOCOM) for Bolivia.

“I’m a radio aficionado,” he says enthusiastically, discussing his seven-month stint in the cabinet of President Carlos Mesa (2003-2005), his 15 years at the San Gabriel Radio station, and his experience now in Atapiri, a station launched to discover radio broadcasting talent among indigenous people.

Since 2006, Atipiri has been putting into practice the ideas of the Centre of Education and Communication for Indigenous Communities and Peoples, of which Ayma is a founder. Like the San Gabriel station, it broadcasts from El Alto, a city of one million in the highlands next to La Paz.

El Alto is home to many of the indigenous Bolivians who have come to La Paz, the seat of government, from rural villages.

Initiatives to keep native culture and values alive and to help indigenous people in rural areas integrate have, paradoxically, mushroomed in El Alto.

Ayma pointed out that in the 2001 census, 62 percent of the population of Bolivia identified themselves as indigenous.

That census not only asked people for the first time whether they saw themselves as belonging to an indigenous group, but it also found that the mother tongue of half of the population was an indigenous language.

Based on these and other figures, the National Statistics Institute estimates that 66 percent of the population has an indigenous “ethnolinguistic” origin.

Ayma bases his new model of communication, NUMOCOM, on the concept of “community radio stations as instruments of communication and development” which offer programming that comes from “the deep roots of the people.”

The first commercial radio station in this country was Radio Nacional de Bolivia, which began to operate in March 1929. But broadcasting in the Aymara language – the most widely spoken indigenous tongue in Bolivia, after Quechua – only dates back to the 1960s, when a programme in that language was on the air from 5:00 to 7:00 AM.

Under the NUMOCOM model, experienced, university-educated journalists become communicators speaking in their mother tongues and producing programming tailored to their communities.

The reality these communicators address and reflect in the community radio stations is ignored by the mainstream press and broadcast media, Ayma said.

“The pages of any Latin American newspaper are full of news about the European royalty, their weddings, their pregnancies,” he says. “But we don’t see news from
Charaña (on the western border with Chile), the foothills of Anallajchi (a snow-capped mountain), the llama grazing areas, or the Amazon jungle.

“At this very moment, a herder is coming home thirsty after a long day of work, and he’s listening to us,” says Ayma, who adds that the herder complains that his life isn’t reflected in the media, which are dominated by the homogeneous popular entertainment programming of the transnational media corporations.

Ayma criticises the commercial radio stations of El Alto because they ignore traditional Bolivian Andean music, played with pan pipes, charango, guitar and drums, and only play cumbia combined with techno and rap.

He cited Bolivian journalist Luis Ramiro Beltrán, 1983 winner of the McLuhan Teleglobe Canada award for his theories on communication for development, which were predominant in Bolivia in the 1960s and 1970s.

Taking these theories as a basis, Ayma developed his NUMOCOM model of communication, incorporating other values like environmental conservation, preservation of Pachamama or Mother Earth, and the appropriate use of water for human consumption and irrigation.

He also urges people to fight the use of synthetic products that end up in garbage dumps or the water, and kill livestock.

Finally, he advocates horizontal communication, to be used in the organising and empowerment of communities, in which the communicators are part of the action.