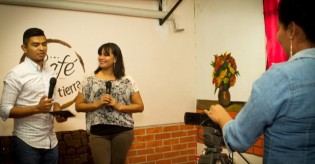 By Edgardo Ayala
The Izcanal Radio and Television set is simple and austere, but this TV station made history in El Salvador, being the first, and until now the only one, to make the leap from community radio to community TV channel, in 2006.

By Stella Paul
Eighty-year-old Chenabai Kushwaha sits on a charpoy under a neem tree in the village of Chitawar, located in the Tikamgarh district in the central Indian state of Madhya Pradesh, staring intently at a dictaphone.

By Naimul Haq
The sun is just beginning its descent as a knot of farmers gathers around a small, portable radio in the grounds of the Nachol Pilot High School in Bangladesh’s northwestern Chapainawabganj district, about 300 kilometres from the capital, Dhaka.

By IPS Correspondents
The advent of mobile phones has given a fillip to CR because even the cheapest handsets come embedded with FM capability. But K.S. Hariskrishnan reports that red tape is still hampering the establishment of new community radio stations.

By IPS Correspondents
Nisaa FM is an almost entirely female-run Palestinian radio station based in Ramallah, West Bank and the only radio station in the Middle East devoted solely to women’s issues. Jillian Kestler-D'Amours asks director Maysoun Odeh Gangat what the radio station aims to achieve.

By Jillian Kestler-D'Amours
Nisreen Awwad moves closer to the microphone as she signs off to her listeners, the words "Nisaa FM: music, change, success" displayed prominently over her left shoulder.
Next Page »
ADVERTISEMENT ADVERTISEMENT