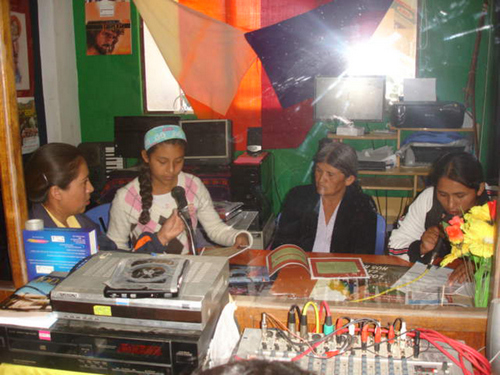 Trifonia Tordoya, two of her daughters, and a granddaughter during their last programme on women’s politics and rights. Credit: Jenny Cartagena/IPS

CLIZA, Bolivia , Nov 27 2012 (IPS) - “Atispa mana atispa ñawpajman rinanchis tiyan” (“Power without power, we have to keep moving forward”) in the Quechua language, Ruth Rojas told her listeners at the end of a series of radio programmes on political culture, broadcast to indigenous women in Bolivia.

From the small booth in the Ecológica community radio station in the town of Cliza, located in one of the highland valleys in the central department (region) of Cochabamba, an intergenerational group of four women and girls sparked debate and reflection on topics linked to politics and women’s and indigenous rights.

They discussed the exercise of democracy, social control, gender equality, legal questions and other issues, based on their experience as indigenous women in South America’s poorest country.

Other community radio stations are involved in similar work empowering people in the highland valleys of this mainly agricultural region on the eastern side of the Andes mountains.

Throughout the department of Cochabamba, women who have never taken a course in radio broadcasting are using the airwaves to inform, empower and raise awareness, and to work for change in their communities.

They know from experience that radio is the best way to reach women in their homes in remote rural villages, where television is an inconceivable luxury due to the lack of electricity, and newspapers are impossible to get because of the distances involved.

In Bolivia there is no official list of community radio stations or stations run by trade unions or peasant associations, because most of them have a very limited range and operate without a licence. But the estimate is that there are at least 2,000 community stations.

Their impact in rural areas and poor neighbourhoods surrounding towns and cities is indisputable, thanks to their programming in Quechua, Aymara or Guaraní, the three most widely spoken native languages in Bolivia, where more than 60 percent of the population of 10.6 million belong to one of 36 different indigenous groups.

In some of the areas, there are bilingual or even trilingual programmes.

The biggest network of community stations is that of Educación Radiofónica de Bolivia (Erbol), with ties to the Catholic Church, whose chief focus is improving social conditions through grassroots communication.

For 21 Sundays in a row, 63-year-old Trifonia Tordoya led a two-hour programme broadcast live in Quechua along with her daughters Ruth, 25, and Tania, 30, both of whom are schoolteachers, and her 13-year-old granddaughter Madeleine Pereira.

The name of the programme was itself a declaration of intentions: “Wakichikuy wasiyuj allin kawsayta tarinapaj” (“Get ready to live well”, in Quechua).

In the Ecológica radio station, Tordoya told IPS in Quechua that the programme, which had just ended, was the result of her concern about the participation of women in productive activities and decision-making in her village.

She and other local women leaders took part in the programme on “Political culture and cultural diversity: Empowering citizens in Quechua-speaking populations of Peru and Bolivia”, carried out in this country by the non-governmental organisation Ciudadanía: Comunidad de Estudios Sociales y Acción Pública (Citizenship: Community of Social Studies and Public Action).

The aim of the programme is to foster an intercultural political dialogue and strengthen democratic values among women, while tapping into the knowledge of indigenous women.

For three years, women leaders of 20 rural community organisations from Quechua-speaking areas in the highlands valleys of Cochabamba worked to build their own definitions and concepts of key rights and issues, drawing on their own life experiences.

“We didn’t know what exclusion was,” Tordoya said. “We asked each other what was the meaning of that word, which doesn’t exist in Quechua. Later, all together, we came up with a definition for that concept.”

She attended the workshops with her granddaughter Madeleine, who at the time was 10 years old. Madeleine was there to take notes for her, because she reads and writes with difficulty, having only gone to school through fifth grade.

After Tordoya was abandoned by her husband, she raised her six children on her own, farming a small plot of land.

None of the definitions were easy. “We had heard these words in Spanish, but we didn’t know exactly what they meant. So we discussed and debated, and defined them in Quechua,” said Norah Claros, another participant in the workshops.

They decided to call gender “qhari-warmi” (man-woman), because a key principle in the Quechua culture is the complementarity and parity of opposites. And their definition of gender is: “Men and women have the same rights, capacities and way of life, choosing and being chosen, helping each other in work and in life.”

The next step was to get the word out to other women, and help them incorporate these definitions and concepts in their daily lives, because the participants reached the conclusion that unless women were aware of their meanings, the rights would be neither demanded nor practiced.

Some of the participants suggested producing radio programmes, and others suggested workshops, or short radio spots, or radio plays. Tordoya’s idea for a radio programme prospered with the support of Ciudadanía: Comunidad de Estudios Sociales y Acción Pública, and she decided to get her daughters and her oldest granddaughter involved.

The four women from Villa El Carmen, a rural community outside the town of Cliza, decided to discuss one concept each Sunday, in 15 shows. But the enthusiasm of their listeners prompted them to produce six more shows.

They told IPS that they achieved their objective: reaching the homes in the rural communities around Cliza, and urging the local authorities to guarantee the rights of women and the exercise of democracy.

“The audience grew as the programme went on, and the public participated a great deal by calling in over the telephone,” the owner and director of the radio station, Roger Araoz, told IPS. “So we expanded it to two hours and produced another set of episodes.”

“Listeners have been calling in and asking the women to continue, because they did such a good job explaining the rights of women, and expressing constructive criticism of the authorities,” he said.

The Ecológica station belongs to the Erbol network, and reaches the entire rural area of the highland valley around Cliza, the town where it is located, 37 km from the capital of Cochabamba.

“Señora Trifonia is well-known and respected,” said Araoz. “She has participated in other programmes, and she would come to the station to discuss problems facing the community. So when the opportunity for the programme came up, we did not hesitate to give her air time.”

Her daughters Tania and Ruth agree that the general view, which not only prevails in their community, is that women don’t know how to think for themselves and should not participate in politics or be involved in decision-making.

For that reason, they said, many people were surprised to hear three women and a young girl speaking so articulately about these issues on the radio.

Both of them said they were grateful that their mother got them involved in the programme, because it helped them learn about their rights and how to exercise them, which they weren’t that clear about before despite the fact that they are teachers.

And more importantly, they said, the programme helped many Quechua women learn that they have rights, and demand that they be respected in their homes, their communities, and society in general.

Madeleine Pereira said she tried to put everything she learned in the workshops and on the programme “in practice in school, and I teach my schoolmates that they have rights.”