Getting an Education – a Heroic Feat for Native Children in Bolivia 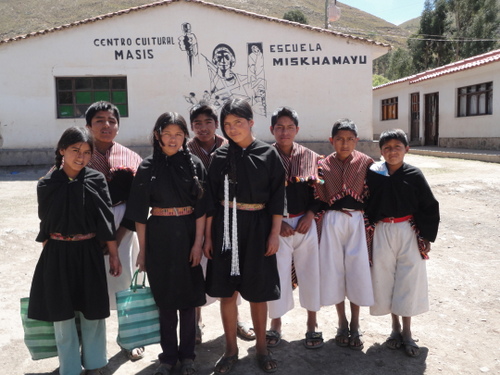 A group of indigenous children in the last year of primary school, standing in front of the Miskhamayu school. Credit: Marisabel Bellido/IPS

MISKHAMAYU, Bolivia , Nov 12 2012 (IPS) - Even before the sun comes up, Reinaldo starts out on the two-hour journey to the school he attends in a small native village in Bolivia, hiking along steep, narrow paths that take him across ravines and rivers.

And by the time he returns home lugging his heavy backpack full of books and notebooks, trudging along in sandals that barely protect him from the stones and thorny plants, it is after dark.

Reinaldo’s arduous daily trek to and from school is similar to the routine of many boys and girls in remote indigenous communities in Bolivia’s highlands region.

There are no roads leading to Reinaldo’s school, which is in a small village seven kilometres from the nearest town. But during the two days that IPS spent with the students at the school, the children arrived in the morning from different parts of this rugged region, determined to study and learn in the precarious school installations.

The Unidad Educativa Miskhamayu is one of the numerous rural schools scattered around Bolivia, which are often located in isolated, hard-to-reach spots and in many cases receive no assistance from the federal or municipal governments.

Sometimes the schools are old haciendas or estate houses adapted for the purpose, and in some cases they are rundown and lack even the most basic services. Some don’t have doors or glass in the windows, and a few don’t even have roofs, with the children exposed to the elements during class. Very few of the schools have electricity.

This is the case of Miskhamayu. Years ago it was one of the most prestigious schools in this wild highlands landscape, when it was financed by the famous Bolivian folk music group Los Masis. But now, the school depends on the state, and its neglect is clear at a glance.

Reinaldo, 14, is completing the last year of primary school. His family lives in Molle Huata, 12 km from Miskhamayu, and like almost all of the families in the area, they depend on agriculture and the production of the country’s world-famous handmade textiles for a living.

The two communities are located at around 3,300 metres above sea level, in the municipality of Tarabuco in the southeastern department or region of Chuquisaca, whose capital is Sucre.

Sucre, the constitutional capital of Bolivia, where the judicial branch is based, is only 65 km away from the municipal seat of Tarabuco. But the trip takes two hours by road. And it takes a further two hours to walk from the town of Tarabuco to the village of Miskhamayu.

Reinaldo explains that only five of his eight brothers and sisters are in school.

This is another common problem: on average, 12.3 percent of indigenous children in the country are deprived of an education – they either never go to school or drop out before completing even one year, according to a study released this year by the United Nations children’s fund, UNICEF.

There are still native children who don’t go to school, despite the fact that the first eight years of education are compulsory and free of cost, and in spite of the strides made by the Education Ministry towards achieving universal coverage, as UNICEF and other international organisations have pointed out.

Carmen Rosa Sánchez, a teacher at Miskhamayu, said the problems of infrastructure and the rural exodus and high poverty levels are all factors that fuel the high school dropout level among native people in Bolivia.

But she stressed that the biggest hurdle for rural indigenous children is linguistic, in this country where more than 60 percent of the population of 10.6 million belong to 36 different native groups.

Most of the 120 students in this 12-teacher school belong to the Yampara Suyu ethnic group, and all of the students are Quechua-speakers. But in the classroom, the children are taught in their second language: Spanish.

“In the first three years of primary school, classes are given in their mother tongue, but by the time they reach secondary school, all teaching is exclusively in Spanish,” said Sánchez, who teaches biology and agricultural sciences.

The result, she said, is that “the students don’t understand us, because the language they operate in is the one they speak at home.”

Children in rural areas have to learn in two languages, unlike their urban counterparts, where students are taught in their mother tongue, Spanish, she pointed out.

Another complication is that schoolchildren in the countryside are fluent in their mother tongue but do not generally write in that language, making the task of learning to read and write – in two languages – even more complex.

“Their surroundings are overwhelmingly Quechua, and that makes it more difficult, because…we tell them one thing and they understand another,” said Leonardo Lucas, who teaches language and literature at the school. “Besides, there are monolingual (Spanish-speaking) teachers, who are not prepared to understand the students or the community itself.”

The Education Ministry has put plans in place to train all teachers to deal with two languages, in order to improve education in rural communities and reduce the school dropout rate. But the results so far have been limited, according to several of the teachers at the Miskhamayu school.

Another major problem faced by students in rural areas is finding a way to continue studying at the secondary and university levels, said Nicolás Fernández, a father of eight.

“All of my kids have studied. Some of them are at the university, others are professionals. My kids studied here, at this school. But there were only five secondary-level teachers, so I took them to Sucre, where they’re studying now,” he said.

And in the most remote areas, children are taught in one-room schoolhouses, where one teacher is in charge of all grade levels and every subject.

Another challenge is that primary and secondary schools can be over 10 km away from students’ homes, as in Reinaldo’s case.

To remedy that, some rural schools have boarding facilities. These schools are called “yachaywasis” (houses of knowledge, in Quechua).

“The yachaywasis provide a place to stay for children who live far away,” said Serrat Miranda, an education worker. “They come on Sunday night and go back home on Friday afternoon. At the school, they have a tutor, who gives them support.”

The Education Ministry is also working to implement the constitution adopted in 2009, which declared Bolivia a “plurinational” state, where the educational system must be inter-cultural and multilingual.

With that in mind, it is working to put into effect a new law on education that has made it a priority to meet the needs of the country’s native people and overcome the obstacles faced by so many youngsters like Reinaldo.

But when the 14-year-old is told that he’s a hero, he merely shakes his head, and says calmly but firmly: “I just want to learn a lot, finish school, and one day go to the university.”