LIMA, Feb 16 2011 (IPS) - “My classmates from Utupampa had to walk an hour to get to school,” said Yasmín Sena, a young woman from a village in Peru’s highlands. “That community is way up in the mountains; no cars can go there.” 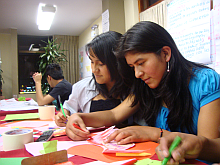 “It was a really difficult and dangerous walk,” especially when the girls had to make the trek home at night, the 18-year-old Sena, who is from Tumpa in the west-central highlands region of Ancash, told IPS.

Although she managed to complete her secondary school studies, many of the other girls in her class dropped out, due to the numerous barriers standing in the way of education for girls in many of Peru’s impoverished rural regions.

A law was passed in Peru in 2001 to foment education for girls in rural areas. But it has yielded few results, according to a report by FLORECER (National Network for Girls’. Education in Peru), which groups civil society organisations and government institutions.

“The only thing it has done is raise awareness and mobilise organisations around the issue; concrete progress is needed and there is much to be done,” Teresa Tovar, vice president of FLORECER, told IPS.

The study, based on official figures from 2009 and the first quarter of 2010, shows that 83.7 percent of 12 to 16-year-olds in urban areas attended secondary school, compared to 66.4 percent of that age group in rural areas.

And while there is no difference in the proportion of girls and boys in rural areas who enrol in secondary school, there is a large gap with respect to how many complete their schooling.

Tovar spelled out a number of factors that influenced the phenomenon. “Access to education may have grown, but it is harder for some communities to send a girl or young woman to study, and they prefer to give the opportunity to a boy or young man,” she said.

Geographic conditions are another factor. Sena said that several of her classmates who lived in highlands villages in Ancash dropped out of school because classes were only given in the afternoon (in some parts of the country, students attend classes in shifts), and it was dangerous for them to return home after dark.

“A number of them had to walk a long way, after leaving school at 6:30 in the evening. So several of them dropped out of school, and now they’re mothers,” said Sena, who is studying psychology in Huaraz, the regional capital.

Every year, an average of four girls would drop out of her class to start a family. “They didn’t have the same luck I did,” said Sena, who smiled as she talked about winning a prize in 2010 awarded by the Women’s Ministry to young female community leaders.

This month she visited Lima with a group of young people who belong to the Alianza Nacional de Líderes de la Transformación, a group of youth leaders for change organised by World Vision, an international Christian relief and development organisation.

The study by FLORECER indicates that the greatest progress in reaching gender parity in education has been made at the primary school level.

According to official figures, 94.4 percent of children between the ages of six and 11 are enrolled in school, and there are no major differences in terms of gender or poverty level. In rural areas, the enrolment rate is even three-tenths higher.

But at the preschool level, there is a significant rural-urban gap: 66.3 percent of urban children between the ages of three and five are in preschool, compared to 55 percent of rural children.

Interestingly, while in rural areas girls outnumber boys in preschool, the proportions are gradually inverted as the children get older, and the inequality takes on alarming proportions when it comes to indigenous girls and adolescents.

The United Nations Children’s Fund, UNICEF, stated in the report “Situation of Indigenous Children in Peru”, launched in September, that the national statistics hide the differences between males and females in education.

But when the figures are broken down in the provinces with the largest indigenous populations, gender inequalities are seen when it comes to completing primary and secondary school, the report says.

Tovar said boarding schools, where students spend 15 days at school and then 15 days at their rural family homes, could be a solution at the secondary level. The expert explained that this system has been applied on a small scale through agreements with religious institutions, but that the state has not yet institutionalised it.

And the problem is not just coverage, but quality. “Not all teachers are really familiar with the subjects they teach, and we students have to put up with their schedules when they miss class to do errands,” Melissa Vargas, from the village of Chuquizongo in the highlands of the northern region of La Libertad, told IPS.

Vargas, 17, attends a special academy to catch up on math and verbal reasoning skills that she didn’t acquire at school and which she needs to enter university, where she wants to study accounting.

The quality of education is also linked to the inadequate availability of Bilingual Intercultural Education (BIE), which is especially essential to indigenous girls who do not speak Spanish, the FLORECER report warns.

In most regions of Peru, BIE coverage for Amerindian children and adolescents is below 50 percent, according to a 2008 study by economist Enrique Vásquez. That was the case in 18 of 21 regions studied, out of the 24 regions into which Peru is divided.

In Amazon regions like Huánuco and Madre de Dios, only 8.6 and 9.9 percent of primary school children received BIE, respectively.

There is also a shortage of bilingual education in the Andean regions, home to the country’s main Amerindian groups, the Quechua and Aymara. In Ancash, only 26.5 percent of indigenous children receive BIE, in Puno 34 percent, and in Huancavelica, the poorest region in the country, 40 percent.

In an ongoing monitoring process, the Ombudsperson’s Office found that only 12 Units of Local Educational Management (UGELs), out of 45 that provided information, identified teachers who had received specialised BIE training, among the educators that they had hired.

Another nine UGELs reported hiring 530 teachers without training in BIE, while 87 teachers did not even have a teaching degree.

“The regional education boards, in conjunction with the UGELs, should identify how many teachers with training in bilingual intercultural education are needed,” Alicia Abanto, head of the indigenous peoples programme in the Ombudsperson’s Office, told IPS. “They should carry out an evaluation, and they should plan, and guarantee that this right is respected.”

Tovar said: “It is a serious problem in the classroom when indigenous children don’t understand what is taught in Spanish.”