TRINIDAD, Bolivia, Aug 20 2010 (IPS) - In the northeastern Bolivian department (province) of Beni, a region of wetlands, savannah and jungle where three-quarters of the population lives in poverty, indigenous women are building a new kind of leadership to help develop their communities. 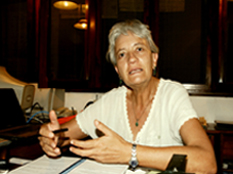 The lowlands region, whose capital is Trinidad, is home to 16 of the country’s 36 native groups, each one of which preserves its own traditions and particular ways of living in community, researcher Zulema Lehm, one of the foremost experts on Bolivia’s lowlands indigenous peoples, says in this interview with IPS.

Lehm, the author of several books on the various native groups that live in the Amazon rainforest in northeast Bolivia, and in the Chaco, a semi-arid expanse of dense thorn scrubland in the southeast of the country, is involved in a number of development projects in indigenous communities.

In the projects, she works to make sure that one basic element is the promotion of gender parity, while taking into account the particular roles played by women in each group.

The population of Beni, one of the least populated departments in Bolivia, is 40 percent indigenous. The native peoples of the country’s lowlands are mainly hunters and gatherers, and their way of life differs from that of the highlands Quechua and Aymara Indians, who comprise a majority of the Bolivian population.

The poverty rate in Beni is 16 percentage points higher than the national average of 60 percent in this country of 10.6 million people, South America’s poorest.

Q: What role do women play in collective decision-making in their communities? A: The answer is a bit complicated, because we’re talking about 16 different indigenous communities in Beni. Since 1998, we have carried out gender studies among the Mojeño, Yuracaré, Sirionó and Guarayo.

One of the areas that we studied was the division of labour. Among Yuracaré, Sirionó and Guarayo women, we saw that they took part in hunting expeditions along with the men, for relatively long periods of time. In fact the entire family would go along, including the children.

In these groups, it was important to observe who was in charge of collecting firewood, tending to the garden plots or harvesting certain products like yucca (a white, starchy tropical vegetable also known as manioc or cassava) or plantains.

Q: And what form does the growing female participation take in the closed circles of male leadership? A: There are dispersed communities where formal meetings of leaders are not as frequent anymore as family reunions, where women do participate.

In these new decision-making gatherings, they are starting to take part to different degrees, and a process of change has been seen over time.

It ranges from more passive to more participative and influential forms of participation in collective decision-making, and is a more or less generalised tendency in the region.

But although women are making a large effort to participate in decision-making gatherings, their traditional cultural roles are undergoing changes at a slower pace.

Q: Are there women leaders who have stood out in the social movements fighting for collective demands (like land and other rights)? A: In the 34-day indigenous march of 1990, the participation of women and children was quite prominent. I should mention Carmen Pereira, who led the indigenous women of Beni. The Sirionó women have always played an important role, not only in their community but in these demonstrations.

Q: Can the power achieved by a woman in one of the lowlands communities give her more influence in her own family? A: The issue has to be approached from an understanding of the rules of kinship, and each indigenous group has slightly different rules, although, for example, polygamy was a privilege enjoyed in the past by male leaders in Amazon native communities.

One of the most significant issues has to do with where a couple lives after they get married — in the man’s home or in the woman’s family home?

In the case of the Sirionó, the new couple goes to live at the woman’s home. That means her family has a degree of control over parental and family relationships, in contrast with other communities where the rule is that couples go to live with the man’s family.

Q: It is said that some native peoples practice polyandry. Is this true? A: There are some cases of polyandry, in other words, women having more than one male partner. But they are certainly relatively isolated cases which have to do with certain adaptations of the cultural system to specific conditions in that family in particular.

For example, a woman whose husband had an accident and can no longer provide for his family in accordance with the division of labour, because he can no longer hunt and provide the protein that is important to these families.

Q: Does the practice persist among any specific native group in Beni? A: These are isolated situations that can occur in different groups. There is an overall cultural format that comes from the Catholic Church and from the state, without a doubt, but in all aspects of daily life, there are also more traditional, older practices in these societies that no one has been able to change.