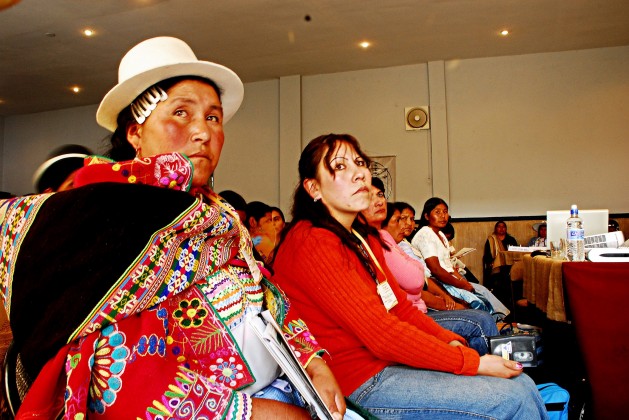 A Quechua leader at a meeting on rural women in Bolivia. Credit: Franz Chávez/IPS.

COCHABAMBA, Bolivia, Jul 26 2012 (IPS) - A growing number of Bolivia’s indigenous women are participating in politics, ready to break the barriers of gender and ethnicity.

Though spread across great distances and representing various realities,  many of these women share a similar history. Most started out leading civil society organisations and then went on to run for local public office, often overcoming resistance within their own families.

“The major obstacles (to accessing a government position) are domestic duties and economic issues,” Lucinda Villca, a councilwoman from Santiago de Andamarca, a municipality in the western district of Oruro, told IPS.

Villca is one of four councilwomen who shared their experiences with IPS during a national meeting of women leaders from rural local governments held recently in the central Bolivian city of Cochabamba.

“We go out on the fields early in the morning to help our husbands, tending the crops or taking the cattle out to pasture. We come home at night and we have to fix supper and make some time to weave so we can earn extra money for the house,” Villca explains.

“With these obligations, there’s no time for anything else,” said this Aymara mother of nine who used to be one of the native leaders of her quinoa and llama farming ayllu (community).

“I now have a greater responsibility. As a member of the indigenous council my mission was to work for my community. In this new post I have to work for the future of my municipality,” she explained, describing an experience she shares with other indigenous leaders elected to local governments.

“I used to be a housewife. I’m a Guarani, and like many women in the countryside, I have no regular job. I was working for a women’s organisation when I was asked to run for office,” Marina Cuñaendi, a 55-year-old councilwoman from Urubichá, said.

Urubichá is one of Bolivia’s poorest areas, despite being located in Santa Cruz, the country’s most prosperous district. According to the last census, 85.5 percent of its 6,000 inhabitants – mostly Guarani people – live in extreme poverty.

Before being nominated in 2010, Cuñaendi never thought of holding public office. She planted rice and corn and, in her “free time,” weaved to support her seven children, along with her husband.

In Urubichá, she said, women have no time to organise and are marginalised from political life. She admitted that she had to consult her husband and children, who were “happy” to support her and encouraged her.

In San Julián, another municipality of Santa Cruz, Yolanda Cuellar, a Guarani, had to overcome a third barrier, that of being “too young,” in the eyes of her community to hold a municipal position.

She turned 21 a month after being elected councilwoman in April 2010, on the ticket of Without Fear Movement, the opposing the party of Movement to Socialism, which governs the municipality and the country.

“They didn’t trust me because I was young, and a woman to boot. In our municipality, sexism is very strong. Now there are four of us women in the council,” this accountant and mother of two said.

Cuellar has her husband’s support. “He understands me and tells me not to quit because people voted for me; he tells me to fight for what I want and not give up just because somebody doesn’t want me there,” she said.

But these women’s lack of political experience and the constant discrimination by male peers have not made the work in the council easier. Being a councilwoman is also very different from being an indigenous leader.

“There’s a lot of bureaucracy which slows down any project, but the worst is the lack of support. Our ideas are ignored and we feel alone. It’s like nobody is interested in doing anything for young people and women,” Cuellar said.

San Julián’s economy is also primarily agricultural, and, because one of the country’s leading highways runs through it, it is complemented with commerce and services activities.

However, 57.9 percent of its more than 70,000 inhabitants live in extreme poverty.

Under the 2009 constitution and other applicable laws, women must occupy at least 50 percent of all elected government positions. To ensure that percentage, candidate lists must be drawn up by alternating between women and men.

At present, 43 percent of the mayors and councilpersons in Bolivia’s 327 local governments are women, and 96 percent of them are holding public office for the first time.

Lidia Alejandro, a 50-year-old Aymara councilwoman from Llallagua, a municipality in the mining district of Potosí, in western Bolivia, also identified inexperience as a factor that puts them at a disadvantage compared to their male counterparts.

“I became a councilwoman without knowing a thing about how municipal affairs are run. I’m a teacher, but holding office is very different. I couldn’t even speak up at a meeting or give statements to the press,” Alejandro said.

“I had to learn as I went along,” she admitted. Training workshops also helped her overcome this limitation.

But training takes time, she said, and that causes problems with husbands as they reproach women leaders for neglecting their homes.

Alejandro is troubled at the failure to attain the goal of bringing the women of her municipality out of poverty due to a lack of specialists who can design projects to meet their needs.

Bolivian legislation requires that part of the annual budget at every government level be allocated to spending on projects that target the needs of women and other vulnerable groups. But most of these budget allocations are not spent and the funds are either returned or transferred to other areas.

“Women have come to us to complain. ‘How is it that we have four councilwomen and they’re not doing anything for us?’ they say. We’ve tried to join forces, but the truth is that we all have our political loyalties,” Cuellar said.

Bolivia has seen great progress in terms of women’s participation in politics, furthered by the Constitution and a number of different laws, Natasha Loayza, a specialist with the U.N. Women’s office in Bolivia, told IPS.

“The challenge is to translate this legislation into action, into real and concrete participation,” she said.

Loayza said that one of the programme’s goals was to motivate more women to participate in politics by showing them the meaningful involvement of women who are already participating.

“Women can now access (public office), but it’s very hard. It’s a colossal task. The women who have achieved positions of responsibility in public bodies can bear witness to the problems they face every day to make their presence felt, and not just occupy decision-making positions on paper,” Loayza said.

“We’re still at a point where women have to work hard to really participate,” she concluded.

The programme is being implemented by the ministry of equal opportunities in 18 rural districts and so far it has benefited 4,000 women, with nine million dollars in financing from the United Nations.