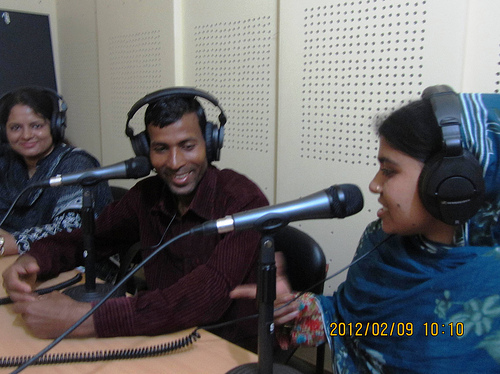 UNITED NATIONS, Feb 12 2013 (IPS) - In 1983, producers of popular radio, alternative radio and educational radio convened in Montreal to define a new genre of radio: community radio. Those dialogues led to the formation of the World Association of Community Radio Broadcasters (AMARC).

The ethos behind community radio, says Marcelo Solervicens, secretary-general of AMARC, is that it extends the public sphere to ordinary citizens, reducing the distance between those who speak and those who listen.

Through this service-oriented platform, community radio has empowered a variety of practitioners, ranging from farmers in rural villages, to university students and trade union workers.

“Community radio came from the need for people to express themselves at local (and national) levels… but from their own perspectives,” said Solervicens.

He cited the use of community radio by U.N. and civil society organisations in various aspects of development: by providing information for farmers facing climate change; by informing populations threatened by HIV AIDS; and by organising cholera-ridden communities in Haiti.

In the spirit of World Radio Day on Wednesday, Solervicens spoke with IPS correspondent George Gao. Excerpts from the interview follow.

Q: With all the communication platforms in the world today – television, newspaper, computers, etc. – what makes radio unique, and why has it stood the test of time?

A: The key element of radio is that it is the most accessible type of media. Calculations (show) that about 97 percent of people are using radio. Although nowadays there’s a discussion about what has become known as a convergence of different media, I think radio stands out in terms of carrying voice.

Radio (creates) a unique type of relationship between the speaker and the one who listens. That’s something very important.

Q: What is the philosophy behind community radio? How is it different than say commercial or public radio?

A: Community radio came from the need for people to express themselves at local levels, or even at the national level, but from their own perspectives. It creates a specific sector that is different from commercial and public radio, and completes the healthy media landscape – healthy in the sense that it completes it with ideas that come from the people themselves, their perspectives… and it may be diverse – in the sense that it will respond to the diversity of the communities inside.

Behind community radio sits this idea of extending the public sphere to people who are ordinary citizens, so that they can voice their opinions. In that regard, it becomes a specific media, totally different from the others.

I think this ethos of community radio is what makes (people) so passionate for it all over the world, and this has expanded… because it is ingrained in human nature, the factor of being able to speak in the public sphere. From this perspective, community radio reflects levels of democracy in a community.

A: There have been studies that (highlight) the role of community radio in informing and also in organising the struggle against HIV AIDS… and this has been recognised by the U.N.

AMARC has worked with FAO for a long time so that local farmers can use radio to get information (about) crises of crops, temperature and weather conditions, and how to better confront (other) challenges (related) to climate change.

I would (note), with the U.N., the impact of community radio in safety management. We had a (productive) experience in this regard in Haiti, after the earthquake, in fighting cholera – giving information to how these types of problems that came after the earthquake could be confronted… So community radios worldwide are available readily when there is a catastrophe, as places of information for local people.

If we consider development as a complex and integrated type of work, community radio is recognised as a key component to achieving development objectives in every area, mainly as a mode to send facts.

There are people who find it very much difficult to confront development challenges when they don’t have information. I think community radio helps in showing that.

Q: Can you tell me about AMARC’s Women International Network and the Gender Policy for Community Radio?

A: AMARC created in 1992 the Women International Network, with a key objective of not only insuring that women has a place in community radio at all levels, but also to develop a gender programming strategy for community radio that contributes to eliminating stereotypes.

So it has three levels – one is the level of defending and promoting a gender policy for community radio… It’s the discourse of ‘what is the role of community radio in regards to gender (not only) within the radio stations, but also in society.’

Secondly, in terms of ensuring training and coalition building and activities being cleared and piloted between women and men… to ensure that there’s not only discourse, but also the practice of equality in gender when it comes to the organisation of activities or different works.

Q: What are some challenges around the world that prevent community radio stations from reaching their full potential?

A: There are practical difficulties and challenges because of the nature of the media (such as training community radio participants), but the key challenges that were analysed in our global evaluation that we did in 2006-2007 are the (challenges that come with) legislation.

Community radio exists today in more than 120 countries, but it’s level of recognition (varies) from one place to another. In some places, community radio has to work with “private” legislations, and has to pay fees that are similar to commercial radios. In other places, it is limited in its sustainability, because it cannot (develop) publicity, or it cannot develop social economy models, because it is not recognised in a specific sector in the legislation.