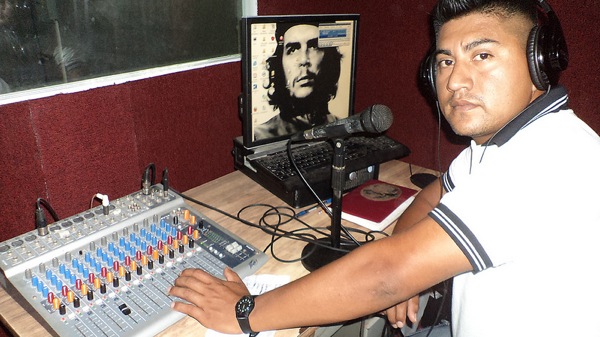 JIQUILISCO, El Salvador, Jan 16 2013 (IPS) - For the first time in El Salvador, a community radio is broadcasting under its own licence. The struggle continues, however, for legislative change that will give these kinds of broadcasters more airspace.

After years of challenges, Radio Mangle finally began broadcasting this week to over 200 communities in the area known as Bajo Lempa, in the municipality of Jiquilisco, in the south of the province of Usulután.

“This is a historic moment, the result of years of hard work and social pressure,” radio presenter Mario Martínez, coordinator of the Mangle Association, which developed the project, told IPS. As of Jan. 14, the radio station is broadcasting on 106.1 FM from the community of Ciudad Romero, in the El Zamorán district of Jiquilisco.

In October, the state-run General Superintendence of Electricity and Telecommunications (SIGET) awarded this frequency to a public agency, which transferred it to Radio Mangle, making it the first community radio in the country to obtain a licence. Since then, the Mangle Association has been busy preparing for its maiden broadcast.

The emergence of community radios in El Salvador dates back to 1992, at the end of the 12-year civil war, when opportunities for sharing opinions and dissent opened up. But these radios have faced issues for lacking permits; some radio stations have been closed down and violently evicted from their premises by the police.

The Telecommunications Law of 1997 tacitly allows community radio stations to operate, but they must acquire their frequencies through public auctions, putting them at a disadvantage with respect to business media groups.

“It is one of the most anti-democratic and malicious laws ever approved in this country,” Leonel Herrera, head of the El Salvador Association of Participatory Radios and Programmes (ARPAS), told IPS.

Unable to afford individual frequencies, the 18 community radios belonging to ARPAS pooled their resources and with the help of international funding purchased the frequency 92.1 FM in 1998. They split it so that each radio station could broadcast in its specific location, but this method caused interference problems.

Since 2000, Radio Mangle has broadcast on the frequency of Radio Maya Visión, a station linked with the leftwing Farabundi Martí National Liberation Front (FMLN), the government party since 2009, when President Mauricio Funes took office. Funes was a popular television journalist who began his professional career in radio.

The Radio Mangle project was born as part of the early warning system promoted by the communities of Bajo Lempa, one of the country’s most vulnerable regions. Every rainy season, floods cause fatalities and crop losses and displace the population.

But interference prevented their broadcasts from working, and the radio shut down in 2010. The Mangle Association applied to SIGET for a broadcasting licence that same year, but the application was refused even though the frequency had not been offered at auction.

In 2011 the Association tried again to obtain 98.1 FM, but a commercial company won the auction with a bid of 20,000 dollars, Martínez told IPS during an interview at the radio station.

“Some people just wait for frequencies to be offered at auction, and then they show up,” he said. “It wouldn’t be the first time that they win a frequency and then do not use it. They do this just to block us,” he said.

In order to circumvent the auctions, Radio Mangle approached the Communications Secretariat of the Presidency, which in July 2012 asked SIGET for a frequency for official use. It then transferred the frequency to ARPAS, which handed it to the Mangle Association.

In August, ARPAS, the “José Simeón Cañas” Central American University (UCA) and the Foundation for Law Enforcement Studies (FESPAD) filed a constitutional appeal at the Supreme Court against several articles of the Telecommunications Law.

They requested that auctions be revoked as the only method of acquiring radio and television frequencies, claiming that the system violates constitutional principles such as equality under the law by not allowing community radios to compete equally with business groups for frequencies.

Other articles of the constitution that guarantee freedom of expression are also being breached when radio licences are blocked, they complained.

But commercial radios counter that if frequencies are allocated to community radios, interference from these would affect programmes on already established radios.

“I don’t understand why they want to do away with auctions, when there are no spare frequencies available on the spectrum; it’s a technical problem,” Ana María Urrutia, executive director of the Salvadoran Broadcasting Association (ASDER), told IPS.

ASDER represents over 210 commercial radios in El Salvador and as such defends the interests of commercial broadcasting.

Community radio stations point out that their main purpose is not to generate profits, and so there should be a different route for them to be granted licences.

ARPAS argues that if the frequency bandwidth were divided in two, with a reduction from 400 KHz to 200 KHz, there would be twice the space to allow room for new broadcasters.

But Urrutia disagreed, saying, “Dividing the bandwidth would mean repossessing some of the frequencies that are already occupied by owners, and that cannot be.”

SIGET Superintendent Luis Méndez did not respond to IPS’s request for a statement regarding this question.

In Martínez’s view, the broadcasting association’s refusal to share the spectrum with community radios is based on ideology rather than technical or commercial considerations. They do not want people voicing thoughts and discourse different from the dominant messages on commercial radios, which are mainly in the hands of business groups, he said.

In December, ARPAS, FESPAD and UCA jointly criticised SIGET for not including alternative media and community radios on a commission set up to determine how the Salvadoran frequency spectrum will be digitalised.

The organisations say that digitalising the spectrum is an opportunity to open up the space needed by community broadcasters, but worry that on the other hand it could strengthen business groups’ current domination of the spectrum.

“The debate on digitalisation is…essentially political, because it represents an opportunity to democratise access to the frequency spectrum, or the threat of greater concentration of media ownership,” the three organisations said in a statement.