LA PLATA, Argentina, Nov 15 2010 (IPS) - Chilean journalist María Pía Matta, a feminist and staunch believer that communication is a universal right based on freedom of expression, is the new president of the World Association of Community Radio Broadcasters (AMARC). 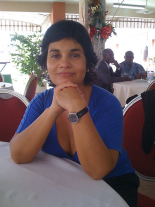 Matta was elected at the end of the Nov. 8-13 Tenth World Assembly of Community Radio Broadcasters in the Argentine city of La Plata, 56 km southeast of Buenos Aires, whose theme was bolstering the effectiveness of community radio stations to help achieve greater social justice.

The more than 5,000 community radio stations that belong to AMARC on every continent should have increasing legal recognition, “because they are a key tool for expanding democracy at the local and global levels,” she says in this interview with IPS.

Matta, a social activist and journalist who has been involved in alternative media from the start of her career, is head of La Morada, a Chilean NGO dedicated to improving the lives of low-income women.

As vice president of AMARC, she was a prominent advocate of community radio in the region, where these alternative stations are growing and flourishing in a broader context of social and political reforms ushered in my left-leaning governments.

She will now focus her experience on the global network of community broadcasters, while pressing for growing participation by women in community radio and in the leadership of AMARC.

Her predecessor as head of AMARC is British journalist Steve Buckley.

Q: How would you describe the state of community radio today? A: I think there has been major progress in the world in terms of comprehension of what community radio stations are and or their link to a better quality of life. Sometimes people think that the issues focused on by community broadcasters have to do with the people who work in them, but they actually have a lot to do with the common good.

The old concept of communication as a transmitter and a receptor was based on an individual right, and community stations are a route towards better democracy, which includes everyone.

Q: Has the phenomenon expanded, or simply gained in visibility? A: It has definitely grown. In Nepal, India, Nigeria; in Bangladesh, in Africa, enormous growth in Asia, in Latin America. Many are examples, for their sustainability, their relationship with civil society.

The reporting that these stations do is different from classical journalism. It’s a learning process that has to be experienced, and the ones that make it are a model for others.

Q: What are the main challenges you will face at the head of AMARC? A: To have an international leadership that incorporates all of the regions. And to give a strong boost to the participation of women in community radio stations, in their management and leadership, and also in AMARC at a regional and global level.

Another of the goals will be to rescue indigenous languages. As part of our fight for freedom of speech and the right to communication, we have to vindicate the right to linguistic diversity, which is an issue that cuts across all regions.

Also, to do a better job with the news angle. AMARC has more than 5,000 member stations, and many of them are sources of news about their communities, an element that the big media lack today.

Q: What will be the main challenges in Latin America? A: Latin America has advanced a great deal in terms of affirmative legislation for alternative media outlets, and that’s something that we have to keep moving forward on. For example, all of our progress in the inter-American system of the OAS (Organisation of American States) can serve as a model in other areas, like the Union of South American Nations (UNASUR) or the Andean Community.

Q: What are you referring to when you mention progress in the OAS? A: In 2002, the Inter-American Court of Human Rights handed down the first-ever verdict on the need to diversify the radio broadcast spectrum. That is, we convinced the magistrates that when you talk about radio, you’re talking about freedom of speech. That was a contribution by AMARC.

The medium doesn’t matter. It could be paper or a technological device; what we’re talking about is freedom of expression.

Q: Have there been other rulings along these lines? A: Yes, the OAS Office of the Special Rapporteur on Freedom of Expression stated that governments must not hinder access to broadcasting frequencies by communities, but must foment it, thus generating transparent processes of participation. In that case we brought up the problems of Chile, Paraguay and Honduras, where community broadcasters face restrictions.

In Honduras there were a series of murders of journalists, and in addition, broadcast frequencies are auctioned.

Furthermore, the stations have no protection. Some are under constant attack, like the broadcasters of the Garifuna ethnic group on the Atlantic coast. Large business groups want to build a tourism centre in that area, and to do that they would like to force out the local communities, so there are attacks on the community radio stations.

Q: In your view, what can be achieved through OAS pronouncements? A: No country likes to receive recommendations because it is failing to act in a democratic manner. This is a way to gradually advance in the comprehension of rights — freedom of expression, the right of citizens to inform and be informed; it’s about moving forward in the creation of jurisprudence that can also be useful to other regions.

Q: What do you think of the new media laws that are emerging in the region? A: While I respect all of the processes, I must say the new law passed in Argentina is the best by far. Uruguay has also made progress on a law on community broadcasters, and now it is moving towards a media law similar to Argentina’s.

The law in Ecuador, on the other hand, is more controversial, because instead of questioning the media system, it meddles with the question of content, and that’s a touchy issue.

Whatever the case, enormous advances have been made in terms of participation, in the way the media are regulated, and in the question of access to them.

Q: Are some countries lagging behind in this process of opening up? A: Yes. In Brazil, for example, changes are needed soon. It is currently one of the countries that cracks down hardest on community radio stations, bringing legal action against thousands of people involved in community broadcasting.

A similarly precarious situation is also seen in Chile and Paraguay, where community radio stations have no legal recognition.