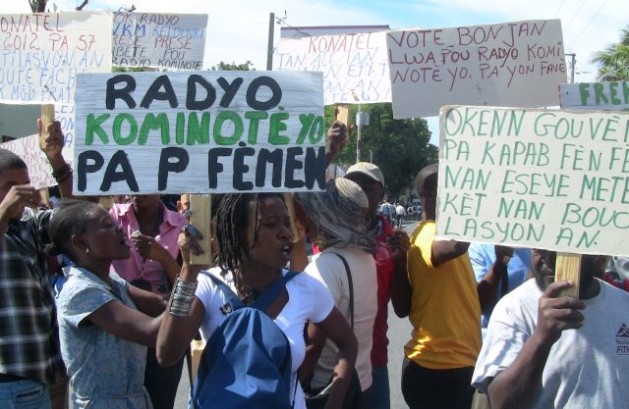 PORT-AU-PRINCE, Haiti, Dec 10 2012 - A community radio station silenced by Haitian authorities is open again thanks to the mobilisation of other stations as well as organisations and associations both inside and outside of Haiti.

RVKM is named after the high school teacher and democratic militant Claudy Museau who was killed during the bloody coup d’état against President Jean-Bertrand Aristide (1991-1994).

CONATEL authorities ordered police to seal off the station the day after President Michel “Sweet Micky” Martelly visited Les Cayes, and came as Martelly is coming under increasing criticism across the country, with rights groups, students, professors and others organising strikes and roadblocks almost every week.

RVKM is known in the city and the region for its educational, cultural and political programmes and for providing space for programming and guests critical of the current government.

“Our governments always show they would like to control the community radios,” says Professor Ary Régis of the State University’s Faculty of Human Sciences.

The shutdown was strongly denounced by local and international organisations, and in a demonstration on Nov. 28. Dozens of members of community radio stations from across the country, joined by students and representatives of various organisations, filled the streets in front of the CONATEL and Ministry of Communication buildings.

Marchers carried posters with slogans like, “Community radios are the result of struggles by democratic and popular sectors! You can’t just shut them down!” and “Long live freedom of the press – NO to censorship!”

Haiti’s 1977 telecommunications law dates from the brutal days of the François Duvalier (“Papa Doc”) dictatorship and does not recognise community radios, even though there are some 40 across the country. A new law – prepared with help from the World Association of Community Radio Broadcasters – has been ready since 2007, but so far parliamentarians have not considered it.

“CONATEL used a legal pretext to close VKM,” shouted Sony Estéus of a small institution that works with the stations, the Society for the Broadcasting of Social Communication (in Creole: Sosyete Animasyon Kominikasyon Sosyal – SAKS), into a megaphone during the Nov. 28 demonstration.

As marchers amassed in front of the Ministry of Communications, Minister Ady Jean Gardy invited representatives to an ad hoc meeting. That consultation, other negotiations and mounting pressure resulted in the re-opening of the radio on Dec. 1, and the decision that all community radios would be allowed to operate “until the publication of a law… thanks to an authorisation that will be published by CONATEL,” according to RVKM news director Jean Claudy Aristil.

“We are very pleased with the decision,” Aristil added. “This is an important step for freedom of the press in Haiti.”

Haiti’s community movement began in secret, during the 1991-1994 coup d’état regime. Pirate radio stations in the capital and a few timid beginnings in the countryside led to a flourishing movement in 1995.

With the help of equipment and training from SAKS and other groups, peasant, youth, labour and other organisations in Haiti’s democratic and popular movement founded stations across Haiti. Some have not survived due to financial challenges and to offensives from local politicians and foreign funders seeking to co-opt the stations.

But many – bearing names like “Radio Star of the Peasant,” “Radio Zèb Tenite” (named after a tenacious grass that survives droughts) and “Radio Working Together – are still on the air. In a country where most people get their news and information from the radio, and where a large percentage of the population lives in the countryside, community radios play many important roles.

“Haiti is dominated by economic and social problems, and by ‘communicational marginalisation,’” according to Professor Régis. “Community radios can help the country develop because they allow people to discuss problems, participate in debates and increase transparency.”

*RVKM is one of dozens of community radios across the country who partner with Haiti Grassroots Watch.