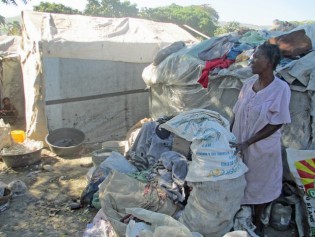 By Milo Milfort
Four years after the a 7.0 earthquake hit Haiti, there are still about 300 internally displaced person (IDP) camps mostly scattered around the capital region. Correspondents Jane Regan and Milo Milfort visited Gaston Margron camp on the southern edge of Port-au-Prince, home to an estimated 800 families living in tents. This slideshow accompanies the story Four Years After Haiti’s Earthquake, Still Waiting for a Roof.