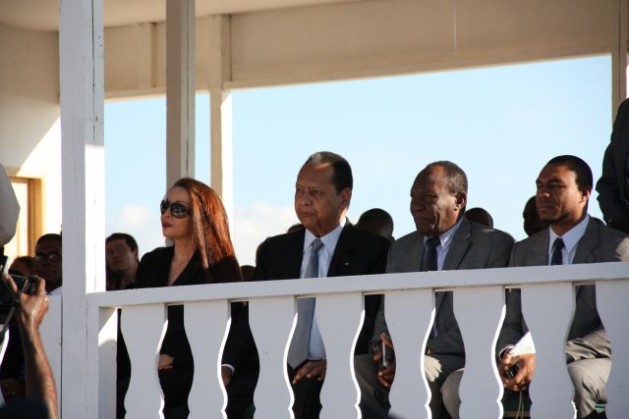 PORT-AU-PRINCE, Feb 26 2013 (IPS) - Angry and frustrated, but also cautiously hopeful, victims, human rights advocates and the Haitian population are waiting for Thursday, Feb. 28, the day former dictator Jean-Claude “Baby Doc” Duvalier has been ordered to appear at a hearing to determine whether or not he will face charges for human rights abuses committed during his brutal 15-year regime (1971-1986).

The order was issued on Feb. 21 when, once again, the 61-year-old ex-dictator refused to show up at court. The sweltering room was packed with representatives of foreign and local human rights groups, journalists and with some of the 30 victims who are suing Duvalier on the rights violations.

After listening to arguments from Duvalier’s lawyer, the three judges issued an order saying it was “imperative” that Duvalier come to a Feb. 28 hearing, with police escort if necessary.

The pencil of history has no eraser, and people are watching, taking notes. We will never stop demanding justice.

Victims, including Robert “Boby” Duval, imprisoned by the regime for 17 months in 1976 and 1977 and who was in the courtroom, were cautiously hopeful about the ruling.

“It’s a big deal,” Duval later told IPS. “If the Haitian legal system can judge a criminal like Duvalier, that means people can start to have a little bit of confidence in it.”

But the 59-year-old Duval – who nearly died in Fort Dimanche, which is sometimes called “Haiti’s Auschwitz”, and who later co-founded a human rights group called League of Political Prisoners, Friends and Families of the Disappeared – warned that the order is only one small step.

Thursday’s session will only determine if the government will open an investigation and begin to hear victims’ complaints, he said.

Since Duvalier’s sudden return to Haiti in 2011 after 25 years in exile, “it’s almost like the government has been protecting him, and that’s a problem, because they are under international obligation to judge him,” Duval said.

Jean-Claude Duvalier by the numbers

Age at which Duvalier became “president for life”: 19

Number of years in power as dictator: 15

Number of years his father (François “Papa Doc” Duvalier) was in power: 14

Amount of money Jean-Claude Duvalier is believed to have embezzled for himself and his family: at least 300 million dollars

Number of civilians killed during the 29-year Duvalier regime (father and son), according to Human Rights Watch: 20,000 to 30,000

Duvalier was first indicted for crimes against humanity in 2008 and then again in 2011. But last year, the court suddenly ruled that he would only be tried for embezzlement, saying that the alleged abuses had taken place too long ago.

Human rights groups, victims and even journalists denounced the decision, noting that under international law, there is no statute of limitations on crimes against humanity. This week’s hearing is seen as perhaps the last chance for Haitian victims and Haitian society.

“The State has an obligation to ensure that there is no impunity for serious violations of human rights committed in the past,” U.N. High Commissioner for Human Rights Navi Pillay said in a statement on Feb. 21. She noted that Duvalier is accused of overseeing “torture, extrajudicial executions, forced disappearances and rape”.

“Such systematic violations of rights must not remain unaddressed,” Pillay continued. “All those Haitians who suffered such abuses have a right to see justice is done.”

Human rights activist Marie Yolène Gilles, director of programmes for the National Human Rights Defense Network in Port-au-Prince, has been fighting for justice in Haiti for over two decades.

A journalist at a radio station destroyed during the Sep. 30, 1991 coup d’état carried out in large part by former members of the ancien régime and against democratically elected President Jean-Bertrand Aristide, she has been forced into hiding several times over the years. She is not entirely optimistic about the current government’s commitment.

“The people in power always say they are working for democracy, for a ‘state of law,’ but if that’s true they need to send clear signals,” Gilles told IPS.

Since Duvalier’s sudden and suspicious return to Haiti in 2011 (he arrived with no passort), signals from President Michel Martelly – an admitted former “Tonton Macoute” during Jean-Claude’s reign – have been anything but clear.

Martelly paid the aging ex-despot a very public visit and called for reconciliation. More recently, the government issued Duvalier a diplomatic passport, claiming that as a former “president”, he was entitled to it.

Last year, despite a judge’s order that he stay in the capital, Duvalier attended an event commemorating the second anniversary of the 2010 earthquake in Gonaives, about 100 kilometres up the coast. He sat in the front row next to the ex-dictator and accused human rights violator General Prosper Avril, and even shook hands with President Bill Clinton and the presidential couple.

He is also often seen out and about at swank restaurants with friends and political allies, some of whom hold government posts.

Many in Haiti also criticise the U.S. government for not taking a stronger stand. In contrast to the U.N. and human rights groups, Washington has been largely silent, or has implied that judging the ex-dictator was not a priority.

Noting that Duvalier had a record of “repression”, in a 2011 interview with CBS, Secretary of State Hillary Clinton said it was up to “the government and people” to decide on his fate, stressing: “[W]e’re focused on trying to maintain stability, prevent chaos and violence in this very unpredictable period with his return.”

“The so-called ‘friends of Haiti’ countries have been too tolerant,” Duval told IPS. “That doesn’t happen in other countries. This is a lack of respect for the Haitian people. So many people died during the Duvalier regime.”

Except for a brief period, the U.S. government supported the 29-year Duvalier dictatorship (Jean-Claude’s father, François, controlled Haiti from 1957 until his death in 1971) with military and development aid, as well as with direct budget support.

Jean-Claude Duvalier’s government also received millions of dollars in assistance (grants and loans) from the World Bank, the International Monetary Fund and the Inter-American Development Bank.

“The pencil of history has no eraser”

The Feb. 28 hearing is part of an appeal brought by a group of 30 victims that is being closely watched by local and international rights groups, many of whom had representatives in the courtroom last week, among them Béatrice Vaugrante of Amnesty International.

“Jean-Claude Duvalier cannot be beyond the reach of justice,” Vaugrante said in a statement issued after last week’s order. “The authorities in Haiti have the duty to do all they can to ensure he faces the courts for the systematic abuses that took place during his time in office. If he continues to avoid the hearing, he must be arrested.”

“Duvalier must be judged. That would show people that you have to pay for what you do. He needs to face up to all of the accusations and society must know why all those crimes happened, why so many died, why they tortured people at Fort Dimanche,” Gilles told IPS, quoting a Haitian proverb: “‘The pencil of history has no eraser’ and people are watching, taking notes. We will never stop demanding justice.”