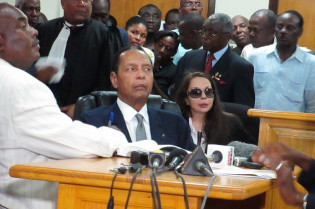 By Jane Regan and Milo Milfort
Angry and frustrated, but also cautiously hopeful, victims, human rights advocates and the Haitian population are waiting for Thursday, Feb. 28, the day former dictator Jean-Claude “Baby Doc” Duvalier has been ordered to appear at a hearing to determine whether or not he will face charges for human rights abuses committed during his brutal 15-year regime (1971-1986).
ADVERTISEMENT ADVERTISEMENT