Stories written by Naimul Haq
Naimul Haq is a Bangladesh-based journalist with well over a decade of experience. Currently, Naimul is the joint news editor and head of the English news department at Jamuna Television. Formerly, Naimul was a special correspondent for online news agency The-Editor, a senior staff correspondent for Bangladesh News 24 Hours and a senior staff reporter for The Daily Star in addition to other freelancing positions. Naimul is also a consultant with UNICEF Bangladesh and has extensive experience specialising in health and environmental issues with various international organisations, including the World Health Organisation, the Reuters Foundation and the World Bank. 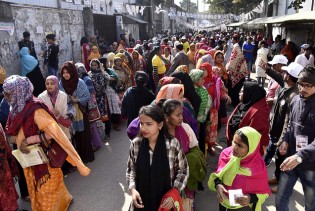 By Naimul Haq
Radhika Banarjee, a 24 year-old CSW, listened carefully at an advocacy gathering in the heart of Dhaka, Bangladesh’s capital.

By Naimul Haq
About a year ago, seven year-old Afroza Khatun dropped out of school as her mother could not continue supervising her homework. The interruption in her grade II lessons was soon noticed by a teacher of an information education centre known as ENRICH, a state-funded programme which aims at supporting children who drop out to continue their education from the primary level (up to grade II).

By Naimul Haq
On a gloomy weather in a hilly suburb in Tarabonia, three women keep themselves busy stitching clothes. The informal shop-cum tailoring outlet is the only one of its kind in the neighbourhood and so the shop has a good record of sales of apparels. Minu Bai Marma, a 27 year-old housewife who runs the rented shop, gives a smile and attends to her regular customers. Customers keep ordering for new dresses, especially before festivals and Minu and her husband earn a fairly good amount of profits to run the family.

By Naimul Haq
Though he is only 16 years old, Mohammad Yasin has been through hell and back. He recently survived a hazardous journey by sea, crammed into the cargo-hold of a rudimentary boat along with 115 others.
Next Page »
ADVERTISEMENT ADVERTISEMENT