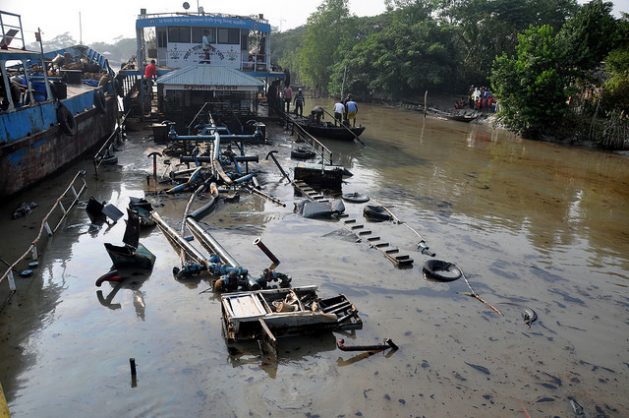 A sunken ship after it was salvaged in the Sundarbans last year. Credit: Naimul Haq/IPS

DHAKA, Bangladesh, May 19 2018 (IPS) - Toxic chemical pollution in the Sundarbans, the largest mangrove forest in the world, is threatening thousands of marine and forest species and has environmentalists deeply concerned about the future of this World Heritage Site.

"Obviously, such cargo accidents involving shipment of toxic heavy metals inside the Sundarbans would have irreversible impacts on this unique and compact ecosystem." --Sharif Jamil

Scientific studies warn the sudden drastic fall in the plankton population may affect the entire food chain in the Sundarbans in the near future, starving the life in the rivers and in the forest.

The latest incident involved the sinking of a coal-loaded cargo ship on April 14 deep inside the forest, popularly known as the home of the endangered Royal Bengal Tigers, once again outraging environmentalists.

Despite strong opposition by leading environmental organizations vowing to protect the biodiversity in the Sundarbans, which measure about 10,000 square kilometers of forest facing the Bay of Bengal in Bangladesh in South Asia, policy makers have largely ignored conservation laws that prioritise protecting the wildlife in the forest.

Critics say influential businessmen backed by politicians are more interested in building industries on cheap land around the forest that lie close to the sea for effortless import of the substances causing the environmental damage.

Divers from the Bangladesh Inland Water Transport Authority (BIWTA) have traced the latest sunken vessel lying some 30 feet deep underwater, but they have not been able to salvage the ship.

It is the third to have capsized in less than two years in the ecologically sensitive region, some of which remains untouched by human habitation.

The deadliest accident occurred on Dec. 9, 2014. Amid low visibility, an oil tanker collided with a cargo vessel, spilling over 350,000 liters of crude oil into the Shela River, one of the many tributaries that crisscross the forest – home to rare wildlife species like the Bengal Tiger and Irrawaddy dolphin.

Then, in May 2017, a cargo ship carrying about 500 metric tons of fertilizer sank in the Bhola River in the Sundarbans. In October the same year, a coal-laden vessel carrying an almost equal weight of coal sunk into the meandering shallow Pashur River.

Each time toxic materials pollute the rivers, the government comes up with a consoling statement claiming that the coal has ‘safe’ levels of sulfur and mercury which are the main concern of the environmentalists.

Outraged by official inaction, many leading conservationists expressed their grievances at this “green-washing.”

Sharif Jamil, Joint Secretary of Bangladesh Poribesh Andolon or BAPA, told IPS, “I feel ashamed to know that such a scientifically untrue and dishonest statement of one cargo owner (safe level of sulfur and mercury) was endorsed by our government in their reports and acts which significantly damages the credibility of the government and questions the competency of the concerned authorities.”

“Obviously, such cargo accidents involving shipment of toxic heavy metals inside the Sundarbans would have irreversible impacts on this unique and compact ecosystem,” he said.

Jamil criticized the state agency responsible for protecting the environment, saying, “The department of environment or DoE has responsibility to monitor and control the pollution by ensuring punishment to the polluters. We have not witnessed any action from DoE so far, in this case particularly.”

While coal may not be as environmentally destructive as crude oil spill, the commercial shipping path across the Sundarbans has a long track record of disasters.

Professor Abdullah Harun, who teaches environmental science at the University of Khulna, told IPS, “The cargo ship disasters are proving to be catastrophic and destructive for the wildlife in the Sundarbans. We have already performed a series of studies titled ‘Impact of Oil Spillage on the Environment of Sundarbans’.

“Laboratory tests showed startling results as the toxic levels in many dead species and water samples were found way beyond our imagination. The most alarming is the loss of phytoplankton and zooplankton diversity and populations. Both these are known to play vital role in the food chain of the aquatic environment.”

Professor Harun fears that the embryos of oil-coated Sundari seeds, decomposed as a result of the spillage across 350 square km of land, will not be germinating. Sundari trees make up the mangrove forest and it has specialised roots which emerge above ground and help in gaseous exchange.

He said, “A primary producer of the aquatic ecosystems, source of food and nutrient of the many aquatic animals, has been affected by the oil spill in 2014. The aquatic population will be decreased and long-term impacts on aquatic lives like loss of breeding capacity, habitat loss, injury of respiratory organs, hearts and skins will occur.”

He said, “Our team of scientists tested for the fish larvae population. Before the 2014 disaster we found about 6,000 larvae in a litre of water collected from rivers in the Sundarbans. After the disaster we carried out the same test but found less than half (2,500 fish larvae) in the same amount of water. This is just one species I am talking about. Isn’t it alarming enough?”

Following the latest incident, the government imposed a ban on cargo ships using the narrow channels of the Pashur River where most of the vessels sail. But there are fears that the ban will only be a temporary measure as seen in the past. After the December 2014 oil spill, a similar ban on commercial cargo was lifted soon after.

These ‘ban games’ on cargo vessels will not solve the underlying problems in the Sundarbans. Several hundred activists recently marched towards the mangrove forest in Bagerhat to protest plans to build a coal-based power plant near the Sundarbans near Rampal. The activists called on the government to stop construction of the proposed 1.3-gigawatt Rampal Power Plant, which is located about 14-km upstream of the forest.

Environmentalists are also worried about rapid industrialization near the Sundarbans. The Department of Environment (DoE) has identified 190 commercial and industrial plants operating within 10 kilometres of the forest.

It has labeled ‘red’ 24 of these establishments as they are dangerously close to the world heritage site and polluting the soil, water and air of the world’s largest mangrove forest.

Eminent environmentalist Professor Ainun Nishat, told IPS, “My main worries are whether the main concerns for safety of the wildlife in the forest is being overlooked.”

Professor Nishat said, “If we allow movement of vessels to carry shipments through the forest then I like to question a few things like, where does the coal come from? What do we do with the fly ash from cement and other materials? How and where do we dispose of the waste and do we have the cooling waters for safety?”

“What we need is a strategic impact assessment before any such industrial plant is established so that we can be safe before we repeat such mishaps,” said Nishat.

Statistics from the Mongla (sea) Port Authority show that navigation in the Sundarbans waterways has increased 236 percent in the last seven years. This means vessel-based regular pollution may continue to impact the world’s largest mangrove habitat’s health even if disasters like the Sundarbans oil spill can be prevented.

Increasing volume of shipping and navigation indicates growing industrialisation in the Sundarbans Impact Zone and the Sundarbans Ecologically Critical Area, which in turn will increase the land-based source of pollution if not managed.