Integrated Farming: The Only Way to Survive a Rising Sea 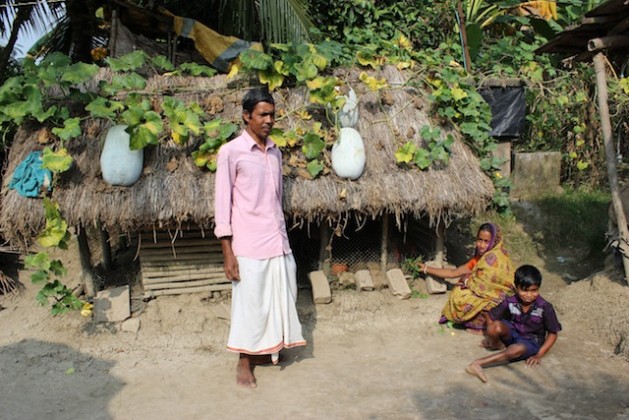 The Mandal family lives on a half-hectare farm in the Sundarbans and uses integrated methods to ensure survival. Credit: Manipadma Jena/IPS

SUNDARBANS, India, Jan 8 2015 (IPS) - When the gentle clucking grows louder, 50-year-old Sukomal Mandal calls out to his wife, who is busy grinding ingredients for a fish curry. She gets up to thrust leafy green stalks through the netting of a coop and two-dozen shiny hens rush forward for lunch.

In the Sundarbans, where the sea is slowly swallowing up the land, Mandal’s half-hectare farm is an oasis of prosperity.

The elderly couple resides in the Biswanathpur village located in what has now been declared a UNESCO World Heritage Site: a massive tidal mangrove forest covering some 10,000 km in the vast Bay of Bengal delta, stretching between India and Bangladesh.

“An integrated farming system virtually replicates nature." -- Debabrata Guchhait, a trainer with the Indraprastha Srijan Welfare Society (ISWS) in the Sundarbans
In this scenic biodiversity hotspot, there is no longer any doubt about the impact of sea-level rise prompted by global warming – studies show that the region lost some 5.5 square km per year between 2001 and 2009, compared to four square km annually over the previous four decades.

As a result, the population here is facing a myriad of crises, a lack of freshwater being one of the most pressing for the primarily subsistence communities who have lived and worked the network of islands that comprise the landmass of the Sundarbans for generations.

The stubborn encroachment of the sea, as well as cyclones, storm surges, eroded farmland lost on the islands’ edges, tidal river floods from concentrated rains, brackish water intruding through breached earthen embankments and increased soil salinity, have all deepened poverty in these villages.

With a population of some four million, research suggests that three out of every 10 people in the Sundarbans now live below the poverty line.

Those like Mandal and his wife have been forced to innovate to stay alive. With traditional farming faltering under the strain of climate change, new methods, such as integrated farming, have been adopted to ensure survival.

Water everywhere, but none for farming

A November 2014 study sponsored by the International Union for Conservation of Nature (IUCN) pointed out that the dearth of fresh water was reaching a crisis point in the Indian portion of the Sundarbans, occupying a large part of the state of West Bengal.

According to Sugata Hazra, oceanographer and climate change expert at Kolkata’s Jadavpur University, the region urgently requires an infusion of 507 cubic metres of fresh water per day to sustain its estuarine ecosystems and dependent human livelihoods.

Increased salinity now affects farmlands in 52 of the roughly 102 inhabited islands on the Indian side of the forest.

Meanwhile, an observatory on Sagar Island, the largest sea-facing island bearing the brunt of climate impacts, recorded a relative mean sea level rise (MSLR) of 17.8 mm per year from 2001-2009, remarkably higher than the 3.14 mm per year observed during the previous decade.

Making ends meet under such harsh conditions is not easy.

Several farmers’ groups in the Patharpratima administrative block of the South 24-Parganas district told IPS that every family has one or more migrant members, on whose remittances they are increasingly dependent.

Other families, like Sukomal and his wife Alpana Mandal, are turning towards integrated farming methods.

The technique “brings the farm and household together” so that waste from one area of life becomes an input for another. Staple crops are mixed with other plant and vegetable varieties, while cattle, ducks and hens all form part of the self-sustaining cycle.

The process “reduces farm costs and risks by going organic and by diversifying yield and income sources, while ensuring nutrition,” Guchhait told IPS.

The hens feed on leafy greens, broken grains and maize while their litter is collected and used as organic manure with dung from Mandal’s three cows and two goats. The remaining hen waste drains into the pond, becoming fish feed.

Digging a small pond to help harvest water during the annual monsoon, which typically brings 1,700 mm of rainfall, helped his fortunes immensely.

From one ‘bigha’, a local land measurement unit equal to 0.133 hectares, Mandal now harvests 480 kg of paddy (un-husked rice) – 70 kg more than he did before, and sufficient to cover one month’s worth of household consumption.

With sufficient fresh water in his backyard he now harvests a paddy crop not once but twice annually, harvesting 900 kg in a disaster-free year. After meeting his family’s food needs, he still sells 25,000 rupees (about 400 dollars) worth of his harvest.

Vegetables grown in the tiny space fetch him double that amount, since he plants a mixed crop of over 25 varieties throughout the year. Using every inch of free space, the family has built up crucial resilience against changing climate patterns.

The overflow from the pond provides a catchment area for fish from their paddy fields.

Still, those practicing integrated farming are few and far between.

“Of our 890 household members in 17 villages, only 15 members have taken up bio-integrated farming,” Palash Sinha, who heads the ISWS in Patharpratima block, told IPS.

“A major reason for the low uptake is the high 12,000-rupee (200-dollar) cost of landscaping integrated farm plots,” he explained. Despite assistance in the form of technical training and monetary support from community organisations, many farmers are reluctant to take the required 5,000-rupee loans.

“For effective landscaping at least 0.072 hectares (720 sq metres) are needed,” Sinha added. “Many farmers do not even have this much land.”

Others associate the integrated method with harder work. “In a good year, income from integrated farms can be 200 percent higher than same-size conventional farms, but labour input is 700 percent more,” Samiran Jana, an integrated bio-farmer, told IPS in the Indrapastha village.

Government assistance for marginal farmers hoping to transform their smallholdings, meanwhile, is extremely low, experts say. For instance, the West Bengal Action Plan on Climate Change – which includes promises on stepping up assistance for integrated farming – is yet to be implemented.

In a country where 56 percent of the workforce is engaged in agriculture, of which some 80 percent are small and landless farmers, experts say that concerted efforts at the federal level are needed to safeguard millions whose lives and livelihoods are bound up with changing weather patterns.