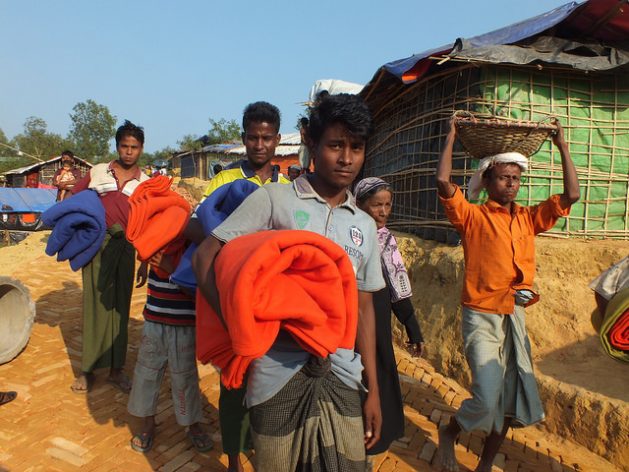 DHAKA, Bangladesh, Jan 16 2018 (IPS) - With discussions underway between Bangladesh and Myanmar about the repatriation of more than a half a million Rohingya refugees, many critical questions remain, including how many people would be allowed back, who would monitor their safety, and whether the refugees even want to return to violence-scorched Rakhine state.

A Joint Working Group (JWG) consisting of government representatives from Myanmar and Bangladesh was formed on Dec. 19 and tasked with developing a specific instrument on the physical arrangement for the repatriation of returnees.

"Three elements of safety – physical, legal and material – must be met to ensure that return is voluntary and sustainable." --Caroline Gluck of UNHCR

A high-ranking Bangladeshi foreign ministry official who requested anonymity told IPS, “The Myanmar government has been repeatedly requested to allow access to press and international organisations so they can see the situation on the ground. Unless the world is convinced on the security issues, how can we expect that the traumatized people would volunteer to settle back in their homes where they suffered being beaten, tortured and shot at?”

He says, “The crimes committed by the Myanmar regime are unpardonable and they continue to be disrespectful to the global community demanding access for investigation of alleged genocide by the regime and the dominant Buddhist community.

“The parties who signed the deal need to consider meaningful and effective and peaceful refugee protection. In Myanmar, as a result of widespread human rights abuses, hundreds of thousands of people have fled the country and are living as refugees in camps or settlements also in Thailand and India. The same approach of reconciliation and effective intervention by the international community must be in place.”

A human right activist pointed out that the very people who are to return to Myanmar have no say in the agreement. Their voices are not reflected in the agreement which does not clearly outline how and when would the Rohingyas return home.

Asked about the future of the Rohingyas, Fiona Macgregor, International Organisation for Migration (IOM) spokesperson in Cox’s Bazar, told IPS, “Formal talks on repatriation have been held bilaterally between the governments of Bangladesh and Myanmar and IOM has not been involved in these.”

“According to IOM principles it is crucial that any such return must be voluntary, safe, sustainable and dignified. At present Rohingya people are still arriving from Myanmar every day who are in desperate need of humanitarian assistance. IOM continues to focus efforts on supporting the needs of these new arrivals, as well as those who have arrived since August 25, those who were living here prior to August and the local host community in Cox’s Bazar.”

Recently, top brass in the Myanmar regime said that it was “impossible to accept the number of persons proposed by Bangladesh” for return to Myanmar.

The deal outlines that Myanmar identify the refugees as “displaced residents.” Repatriation will require Myanmar-issued proof of residency, and Myanmar can refuse to repatriate anyone. Those who return would be settled in temporary locations and their movements will be restricted. In addition, only Rohingyas who fled to Bangladesh after October 2016 will be repatriated.

According to official sources, a meeting of the Joint Working Group supervising the repatriation will be held on January 15 in Myanmar’s capital to determine the field arrangement and logistics for repatriation with a fixed date to start repatriation.

As of January 7, a total of 655,500 Rohingya refugees had arrived in Cox’s Bazar after a spurt of violence against the minority Muslim Rohingya people beginning in August 2016, which left thousands dead, missing and wounded.

In March, the UN and its partners will launch a Joint Response Plan, setting out funding needs to assist Rohingya refugees and host communities for the 10-month period to the end of the year.

Regarding the repatriation process, Gluck said, “Many refugees who fled to Bangladesh have suffered severe violence and trauma. Some have lost their loved ones and their homes have been destroyed. Any decision to return to Myanmar must be based on an informed and voluntary choice. Three elements of safety – physical, legal and material – must be met to ensure that return is voluntary and sustainable.

“While UNHCR was not party to the bilateral arrangement between Myanmar and Bangladesh, we are ready to engage with the Joint Working Group and play a constructive role in implementing the modalities of the arrangement in line with international standards.”

She added that UNHCR is ready to provide technical support to both governments, including registering the refugees in Bangladesh and to help determine the voluntary nature of their decision to return.

“As the UN Secretary-General has noted, restoring peace and stability, ensuring full humanitarian access and addressing the root causes of displacement are important pre-conditions to ensuring that returns are aligned with international standards.

“Equally important is the need to ensure that the refugees receive accurate information on the situation in areas of potential return, to achieve progress on documentation, and to ensure freedom of movement. It is critical that the returns are not rushed or premature, without the informed consent of refugees or the basic elements of lasting solutions in place.”

Gluck noted that while the numbers of refugees have significantly decreased, their needs remain urgent – for food, water, shelter and health care, as well as protection services and psychosocial help.

“The areas where the refugees are staying are extremely densely populated.  There is the risk of infectious disease outbreaks and fire hazards,” she said. “And, with the rainy season and monsoon rains approaching, we are very concerned at how this population, living in precarious circumstances, will be affected. UNHCR it working with partners to prepare for and minimize these risks.”

She said UNHCR has already provided upgraded shelter kits for 30,000 families; and will expand distributions for around 50,000 more this year. The kits include bamboo pieces and plastic tarpaulin, which will allow families to build stronger sturdier, waterproof shelters, better able to withstand heavy rains and winds.