Tales of the 21st Century: Rohingyas Without a State 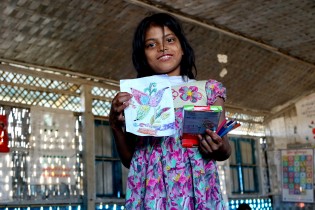 By Paul S. Teng
COVID-19 has disrupted supply chains that are essential to assure food security in the Asia Pacific region, yet countries overall seem to have managed, so far, to keep supermarkets stocked with food and feed those who can afford it. The Asia Pacific region is home to over 60% of humanity and also contains sub-regions with among the highest frequencies of severe weather events and some of the most challenging environments for agriculture. As a region it is characterized by diverse food systems and a multiplex of supply chains. Under normal circumstances, food security is already threatened by a multitude of factors.

Covid-19 and the Rohingya refugee crisis

By Athena Rayburn
All around the world, the numbers are climbing. Each day registers thousands of new cases and lives lost. In Europe, now the epicenter of the pandemic, governments know that the worst is yet to come and are implementing increasingly restrictive measures to enforce social distancing and isolation. In Cox's Bazar, we have been watching the world and holding our breath for the first confirmed case of Covid-19. With reports of the first confirmed case in the local community in Cox's Bazar, it's just a matter of time until the virus reaches the vulnerable population living in cramped conditions in the largest refugee settlement on earth. Thousands of people could die.

The Plight of Women & Young People in the Rohingya Refugee Crisis

By Asa Torkelsson
August 25, 2018 marked one year since violence erupted in Myanmar’s Rakhine State, triggering the massive Rohingya exodus to neighbouring Bangladesh. As the crisis continues with no immediate end in sight, it is crucial to expand and sustain health and life skills services for Rohingya women, girls and youth to locate opportunities amid challenges.

By Trevor Wilson
The lead-up to the Australia-ASEAN Summit in Sydney on 16-18 March 2018 was characterised by widespread and well-publicised protests in Sydney against human rights abuses occurring in several ASEAN member countries – namely Cambodia, Myanmar and Vietnam.
Next Page »
ADVERTISEMENT ADVERTISEMENT