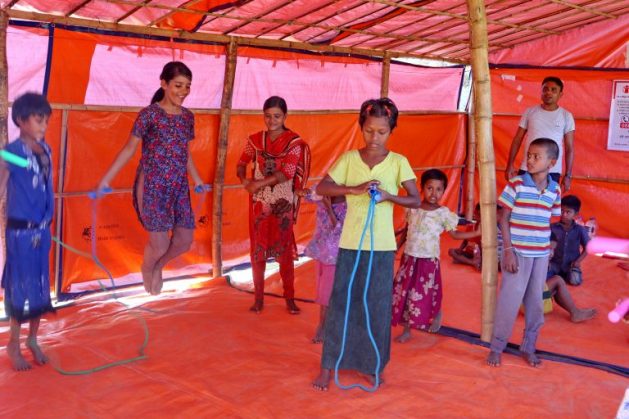 The International Court of Justice instructed Thursday that Myanmar halt all measures that contribute to the genocide of the Rohingya community. More than 910,000 Rohingya refugees have fled to and settled in neighbouring Bangladesh. Pictured here are Rohingya children at Cox’s Bazar, a refugee camp in Bangladesh. Credit: Farid Ahmed/IPS

UNITED NATIONS, Jan 24 2020 (IPS) - In a groundbreaking and much anticipated ruling delivered on Thursday, the International Court of Justice demanded that Myanmar halt all measures that contribute to the genocide of the Rohingya community.

The order was lauded by international bodies and organisations who have been involved with and/or closely following the case since the Gambia filed a lawsuit against Myanmar for human rights violations against the Rohingya community.

The United Nations Secretary General has said he “welcomes” the order and “will promptly transmit the notice of the provisional measures ordered by the Court to the Security Council,” according to a statement from the the Spokesman for the Secretary-General.

The order states Myanmar “take all measures within its power to prevent the commission of all acts” of genocide or harming the Rohingya; that its military not be involved in committing or being complicit in genocide of the community; and that Myanmar “shall take effective measures to prevent the destruction and ensure the preservation of evidence related to allegations of acts”.

Following the order, Adam Combs, Regional Director of the Norwegian Refugee Council, told IPS that this measure “marks an important turning point for the Rohingya people as it means there is now the prospect for their rights to be recognised after years of discrimination, segregation, citizenship barriers and movement restrictions”.

While more than 910,000 Rohingya refugees have fled to and settled in neighbouring Bangladesh, hundreds of thousands of the persecuted community still remain in Myanmar; they remain in grave threat of discrimination and violence and it is for them that the provisional measures remain crucial.

As Combs points out, upwards of 100,000 internally displaced Rohingya remain in camps with poor living conditions and with a lack of access to proper services and healthcare.

“This ruling, especially in its unanimity, is a huge victory for the Rohingya, international justice, and The Gambia,” L. Grant Shubin, Deputy Legal Director at the Global Justice Center (GJC), told IPS on Thursday.

“Especially after Myanmar threw the weight of its Nobel laureate leader behind a spurious defence, its heartening that the Court could unanimously acknowledge the genocidal danger facing the Rohingya still in Rakhine state,” he added.

One of the key asks in the lawsuit was the “provisional measures” that would require, with “extreme urgency”, the halt of any conduct and activities by Myanmar that was perpetuating harm over the Rohingya community.

As Shubin of GJC points out, the ruling was unanimous, which implies that these obligations were supported even by “the ad hoc Judge appointed by Myanmar.”

“The measure requiring Myanmar to report on the measures its taken to comply with the order is an extremely important opportunity for the international community, and the U.N. Security Council specifically, to fulfil their own obligations to prevent genocide,” he added.

“This is the first step on a path to justice for the Rohingya,” said Dr. Simon Adams, Executive Director of the Global Centre for the Responsibility to Protect, according to a statement from GJC.

Combs of NRC reiterated the need for “a concerted effort and renewed engagement by the Myanmar Government” that would ensure a safe livelihood for Rohingyas in Myanmar, and for them to receive their basic rights “in line with the principle of non-discrimination.”

The ruling requires Myanmar to submit a report on all the measures it takes in four months.