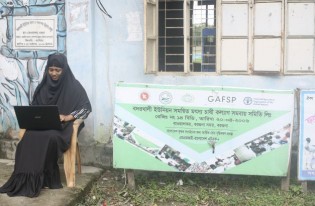 By Farid Ahmed
A barefoot young man in rolled-up jeans clutches a laptop as he slogs through a narrow muddy aisle between rice fields on a drizzling late September afternoon. He’s rushing to help a farm couple who are facing trouble with their ducks in a coastal village in southern Bangladesh.

By Farid Ahmed
At least 141 people (at the time of writing), including children and four army personnel, were killed in separate series of landslides triggered by heavy rains in Rangamati, Bandarban, and Chittagong on June 13, 2017. The losses have been monumental, and officials fear that the death toll may rise even further in the worst landslide since 2007, when a landslide resulted in the death of around 130 people and affected 1.5 million people in the region.

By Farid Ahmed
Anxiety has yet to die down over a week after crowds of Muslims torched more than a dozen temples and scores of houses in southeast Bangladesh, leaving thousands of Buddhists with the unshakeable premonition that more violence was forthcoming.

POLITICS-BANGLADESH: Hasina Can Lay to Rest Ghosts of the Past

By Farid Ahmed
With a stunning landslide victory under her belt, prime minister-elect Sheikh Hasina Wajed has a second opportunity to put the ghosts of the past to rest and release Bangladesh from a cycle of crises that has plagued this country since its violent birth in 1971.
ADVERTISEMENT ADVERTISEMENT