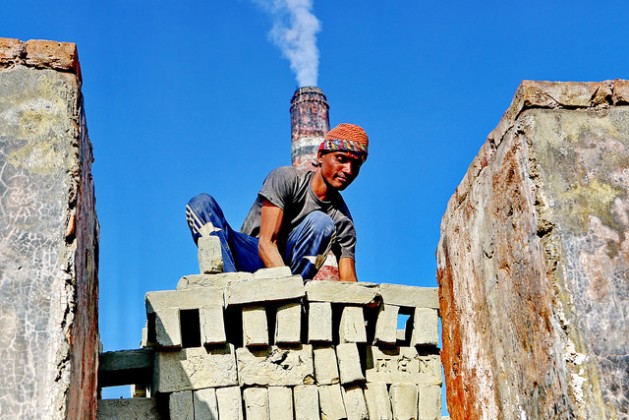 A worker arranges bricks for burning at a traditional brick factory in Munshiganj, Bangladesh. Such factories are responsible for a large amount of carbon emissions. Credit: Farid Ahmed/IPS

DHAKA, Dec 19 2016 (IPS) - Bangladesh is weighing a World Bank proposal to introduce a carbon tax, the first of its kind in the South Asian nation, amid fears of a backlash from consumers.

In its proposal, the World Bank suggested that the government introduce the carbon tax initially only on petroleum products. Bank officials advised the government to keep the market price of fuel unchanged by slashing its own profits.

"The cost of a carbon tax should not be passed on to the consumers." --Dr. Saleemul Huq

Fuel costs are generally much higher in Bangladesh compared to the international market, which has allowed the government to make a huge profit in past years.

“We need to weigh the proposal to assess its pros and cons,” Bangladesh’s state minister for Finance and Planning M.A. Mannan told IPS in Dhaka.

Previous efforts to tax polluting industries by Finance Minister Abul Maal Abdul Muhith have failed to gain traction, and several senior government officials who asked not to be named believe the government will not act quickly on any new tax.

Still, many climate change activists and scientists were largely happy with the proposal and said those responsible for carbon emissions must pay the price. They believe imposing such a tax would trigger new investments in clean technology, but stress that the market price of fuel should be kept stable for consumers.

“Bangladesh has no obligation to impose a carbon tax but nevertheless it should do so to both raise revenue for investments in cleaner energy and also to impose some cost on polluting energy,” said Dr Saleemul Huq, Director of the International Centre for Climate Change and Development.

“At present, the cost the consumers bear is much higher than necessary when the global price of imported petroleum is considered. Hence the cost of a carbon tax should not be passed on to the consumers,” Dr. Huq told IPS.

He said that the tax collected thus would accrue to the government, which could then allocate it to investments in cleaner energy.

The chief of a leading consumers’ rights group disagreed. “I don’t think it’s justified to impose a carbon tax right at this moment,” Ghulam Rahman, president of the Consumers Association of Bangladesh, told IPS.

Rahman, who earlier headed Bangladesh’s Anti-Corruption Commission, said it would not only affect consumers but also hamper the country’s production and development.

Bangladesh should not rush to impose a carbon tax when many of the world’s largest polluters have failed to do so, he said.

In a move to address the impacts of climate change, Bangladesh amended its constitution in 2011 to include provisions for the protection of the environment and safeguarding natural resources for current and future generations. Moreover, as part of its Nationally Determined Contribution during the COP21 meeting in Paris, Bangladesh committed to reducing climate-harming emissions by 5 percent.

Rashed Al Mahmud Titumir, a professor of economics at the University of Dhaka, said the government should take effective measures to curb carbon emissions, but instead of introducing a carbon tax immediately, it should encourage green and clean technologies by offering tax breaks and other benefits.

With assistance from the World Bank, Bangladesh, one of the most vulnerable countries to climate change due to its low-lying geography, was the first to set up its own Climate Change Trust Fund to help mitigate and adapt to climate change, and this time Bangladesh could take the lead again.

Zahid Hussain, lead economist at the World Bank’s Dhaka office, said, “Petroleum products are the best option for Bangladesh to introduce a carbon tax since the government was making a huge profit by selling petroleum products.”

Initially, Bangladesh could focus on fuel only since it might be difficult to collect carbon taxes from other sources, he said.

Hussain argued that while oil prices do fluctuate, the government could assist the most vulnerable segments of the population.

Apart from tapping a significant source of revenue, Hussain said a carbon tax could even help Bangladesh and its exporters carve a niche the increasingly environmentally-conscious developed markets across the world.

A World Bank document did not rule out the challenges of introducing carbon tax and said policy-makers could justifiably be concerned about the impacts of carbon taxes on the poorer segments of the population and on some economic sectors.

“A carbon tax can have significant benefits for Bangladesh, but it’s not without challenges,” it said.