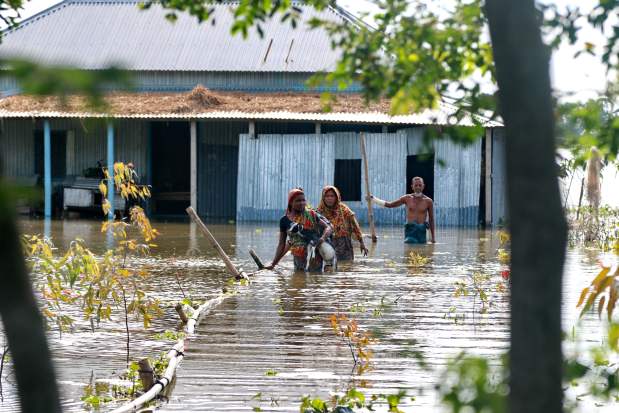 The death toll from drowning, snakebite, house collapse and landslide triggered by monsoon rains and floods rose to over 600 people, officials said on Aug. 19.

More than 16 million have been affected by monsoon floods in Nepal, Bangladesh and India, with many of them either displaced or marooned without food or electricity.

In many areas, although the floodwater has started receding, rivers are still swelling.

A large number of displaced have taken refuge in squalid makeshift camps and are staying in extremely unhygienic conditions, according to aid agencies.

Road and rail communications in the affected areas have been also severely disrupted. Thousands of educational institutions have been forced to close, while submerged hospitals are unable to assist flood victims even as water-borne diseases are spreading.

“This is fast becoming one of the most serious humanitarian crises this region has seen in many years and urgent action is needed to meet the growing needs of millions of people affected by these devastating floods,” said Martin Faller, Deputy Regional Director for Asia Pacific, International Federation of Red Cross and Red Crescent Societies (IFRC).

Bangladesh authorities said more than a third of the country was submerged, and water levels in major rivers were still rising, inundating new areas every day. In Bangladesh, flooding by major rivers has surpassed the levels set in 1988, the deadliest floods the country had seen to date.

According to the disaster management department control room of the Bangladesh government, at least 98 people died in August.

The Ministry of Disaster Management and Relief estimated that more than half a million people in Bangladesh were affected by flooding.

Abdul Hamid, a farmer in Rangpur district, said he had cultivated rice in 10 bighas of land, but it was completely ruined by floods. “I don’t know how to recover the loss,” he said, adding that his house was also destroyed.

In India, over 11 million people have been affected by floods in four states across the north of the country. India’s meteorological department is forecasting more heavy rain for the region in the coming days.

The flood situation in parts of India’s northern West Bengal remained grim until August 18, with many rivers still flowing well above the extreme danger level despite improvement in the overall situation in the region, Rajib Banerjee, West Bengal’s minister for irrigation and waterways, told IPS on Aug. 19.

“The situation in Malda still looks grim and remains as a matter of concern as the water of the River Mahananda continues to rise,” he said.

The situation in villages in the Indian state of Assam is very serious, as embankments of rivers in many areas have been breached, forcing hundreds of families to flee their houses. Poor people, mostly farmers, were the chief victims and many took refuge on roadsides and embankments. Children on a boat come to their two-storey tin-roofed house half of which is submerged in flood water, in Shibaloy, Manikganj district, Bangladesh. Credit: Farid Ahmed/IPS

Thousands of people in northern Uttar Pradesh in India, where the authorities sought military help, were also badly affected and many of them still remained marooned.

Bihar, the worst-hit district in India, also estimated over 150 dead and half a million displaced in the past couple of weeks.

Some 14 districts out of 75, mostly located along the border with India, were badly affected, Acharya said.

In Nepal, many areas remain cut off after the most recent destructive floods and landslides on Aug. 11 and 12. Villagers and communities are stranded without food, water and electricity though the government said it had been providing the victims with foods and other support.

In the flood-hit areas, thousands of people had taken shelter in schools, temples and sides of roads and embankments.

The Nepalese ministry of agricultural development estimated that floodwaters had washed away rice and other crops worth Rs. 8.11 billion (77 million dollars) and feared the crop damage could cast a long shadow on the economy.

The Nepalese government, at a meeting with chief secretary Rajendra Kishore in the chair on Aug. 18, decided to accept foreign support and aid to meet the need.

Scientists attribute the deadly floods in South Asia to a changing climate, which they believe increased the magnitude of the current flooding many-fold.

“The untimely floods being experienced in Nepal, India and Bangladesh can definitely be attributed to climate change-induced changes in the South Asian monsoon system,” Dr Saleemul Huq, director of the International Centre for Climate Change and Development (ICCCAD), told IPS.

The countries in the region have already been taking the brunt of changing climate that caused extreme weather patterns increasing the daily rainfall amount, droughts, untimely flooding and frequent tropical storms.