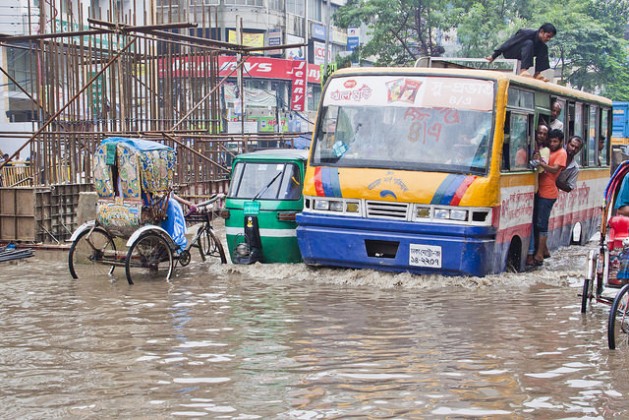 Dhaka is home to about 14 million people and is the centre of Bangladesh's growth, but it has practically zero capacity to cope with moderate to heavy rains. Credit: Fahad Kaiser/IPS

DHAKA, Aug 16 2016 (IPS) - Like many other fast-growing megacities, the Bangladeshi capital of Dhaka faces severe water and sanitation problems, chiefly the annual flooding during monsoon season due to unplanned urbanisation, destruction of wetlands and poor city governance.

But experts are warning that if the authorities here don’t take serious measures to address these issues soon, within a decade, every major thoroughfare in the city will be inundated and a majority of neighborhoods will end up underwater after heavy precipitation.

A 42-mm rainfall in ninety minutes is not unusual for monsoon season, but the city will face far worse in the future due to expected global temperature increases.

“If the present trend of city governance continues, all city streets will be flooded during monsoon in a decade, intensifying the suffering of city dwellers, and people will be compelled to leave the city,” urban planner Dr. Maksudur Rahman told IPS.

According to experts, a 42 mm rainfall in ninety minutes is not unusual for monsoon season, but the city will face far worse in the future due to expected global temperature increases.

The fifth report of the Intergovernmental Panel on Climate Change (IPCC) warns that more rainfall will be very likely at higher latitudes by the mid-21st century under a high-emissions scenario and over southern areas of Asia by the late 21st century.

More frequent and heavy rainfall days are projected over parts of South Asia, including Bangladesh.

Dhaka is also the second most vulnerable to coastal flooding among nine of the most at-risk cities of the world, according to the Coastal City Flood Vulnerability Index (CCFVI), developed jointly by the Dutch researchers and the University of Leeds in 2012.

S.M. Mahbubur Rahman, director of the Dhaka-based Institute of Water Modeling (IWM), a think tank, said the authorities need to flush out the stagnant water caused by heavy rains through pumping since the rise in water level of the rivers during monsoon is a common phenomenon.

“When the intensity of rainfall is very high in a short period, they fail to do so,” he added.

Sylhet is the best example of managing problems in Bangladesh, as the city has successfully coped with its water-logging in recent years through improvement of its drainage system. Sylhet is located in a monsoon climatic zone and experiences a high intensity of rainfall during monsoon each year. Nearly 80 percent of the annual average precipitation (3,334 mm) occurs in the city between May and September.

Just a few years ago, water-logging was a common phenomenon in the city during monsoon. But a magical change has come in managing water problems after Sylhet City Corporation improved its drainage system and re-excavated canals, which carry rainwater and keep the city free from water-logging.

A critical network of canals

“Once there were 56 canals in the capital, which carried rainwater and kept the city free from water-logging…most of the canals were filled up illegally,” said Dr Maksudur Rahman, a professor in the Department of Geography and Environment at Dhaka University.

He stressed the need for cleaning up all the city canals and making them interconnected, as well as dredging the surrounding rivers to ensure smooth runoff of rainwater during monsoon.

In October 2013, the Dhaka Water Supply and Sewerage Authority (DWASA) signed a 7.5 million Euro deal with the Netherlands-based Vitens Evides International to dredge some of the canals, but three years later, there is no visible progress.

DWASA deputy managing director SDM Quamrul Alam Chowdhury said the Urban Dredging Demonstration Project (UDDP) is a partnership programme, which taken to reduce flooding in the city’s urban areas and improve capacity of DWASA to carry out the drainage operation.

“Under the UDDP, we are excavating Kalyanpur Khal (canal) in the city. We will also dig Segunbagicha Khal of the city,” he added.

Water bodies have historically played an important role in the expansion of Dhaka. But as development encroaches on natural drainage systems, they no longer provide this critical ecosystem service.

“We are indiscriminately filling up wetlands and low-lying areas in and around Dhaka city for settlement. So rainwater does not get space to run off,” said Dr Maksud.

A study by the Center for Environmental and Geographic Information Services (CEGIS) in 2011 shows that about 33 percent of Dhaka’s water bodies dwindled during 1960-2009 while low-lying areas declined by about 53 percent.

There are a number of government bodies, including DWASA, both Dhaka South City Corporation (DSCC) and Dhaka North City Corporation (DNCC) and the Bangladesh Water Development Board (BWDB), that are responsible for ensuring a proper drainage system in the capital. But a lack of coordination has led to a blame game over which agency is in charge.

DWASA spokesman Zakaria Al Mahmud said: “You will not find such Water Supply and Sewerage Authority across the world, which maintains the drainage system of a city, but DWASA maintains 20 percent of city’s drainage system.”

He said it is the responsibility of other government agencies like city corporations and BWDB to maintain the drainage system of Dhaka.

DSCC Mayor Sayeed Khokon said it will take time to resolve the existing water-logging problem, and blamed encroachers for filling up almost all the city canals.

Around 14 organisations are involved in maintaining the drainage system of the city, he said, adding that lack of coordination among them is the main reason behind the water-logging.