This article forms part of an IPS series on the occasion of the World Humanitarian Summit, taking place May 23-24 in Istanbul. 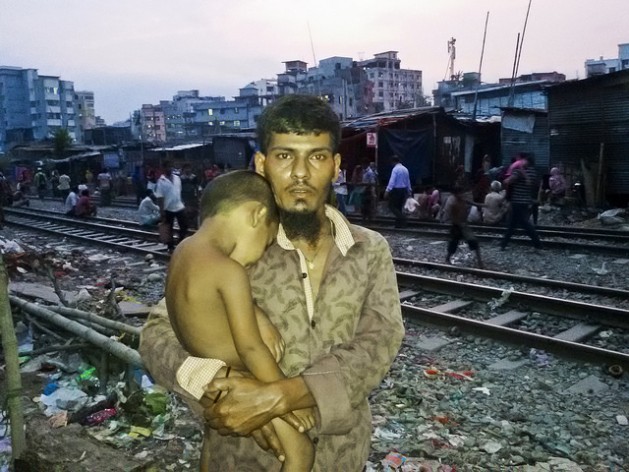 Abdul Aziz stands with one of his children in Dhaka's Malibagh slum. He came here a decade ago after losing everything to river erosion, hoping to rebuild his life, but has found only grinding poverty. Credit: Rafiqul Islam/IPS

DHAKA, May 23 2016 (IPS) - Abdul Aziz, 35, arrived in the capital Dhaka in 2006 after losing all his belongings to the mighty Meghna River. Once, he and his family had lived happily in the village of Dokkhin Rajapur in Bhola, a coastal district of Bangladesh. Aziz had a beautiful house and large amount of arable land.

But riverbank erosion snatched away his household and all his belongings. Now he lives with his four-member family, including his 70-year-old mother, in the capital’s Malibagh slum.

“Once we had huge arable land as my father and grandfather were landlords. I had grown up with wealth, but now I am destitute,” Aziz told IPS.

Fallen on sudden poverty, he roamed door-to-door seeking work, but failed to find a decent job. “I sold nuts on the city streets for five years, and then I started rickshaw pulling. But our lives remain the same. We are still in a bad plight,” he said.

Aziz is too poor to rent a decent home, so he and his family have been forced to take shelter in a slum, where the housing is precarious and residents have very little access to amenities like sanitation and clean water.

“My daughter is growing up, but there is no money to enroll her school,” Aziz added.

About the harsh erosion of the Meghna River, he said the family of his father-in-law is still living in Bhola, but he fears that they too will be displaced this monsoon season as the erosion worsens.

Like Aziz, people arrive each day in the major cities, including Dhaka and Chittagong, seeking refuge in slums and low-cost housing areas, creating various environmental and social problems.

Bachho Miah, 50, is another victim of riverbank erosion. He and his family also live in Malibagh slum.

“We were displaced many times to riverbank erosion. We had a house in Noakhali. But the house went under river water five years ago. Then we built another house at Dokkhin Rajapur of Bhola. The Meghna also claimed that house,” he said.

According to scientists and officials, Bangladesh is one of the most vulnerable countries in the world to climate change and rising sea levels. Its impacts are already visible in the recurrent extreme climate events that have contributed to the displacement of millions of people.

Cyclone Sidr, which struck on Nov. 15, 2007, triggering a five-metre tidal surge in the coastal belt of Bangladesh, killed about 3,500 people and displaced two million. In May 2007, another devastating cyclone – Aila – hit the coast, killing 193 people and leaving a million homeless.

Migration and displacement is a common phenomenon in Bangladesh. But climate change-induced extreme events like erosion, and cyclone and storm surges have forced a huge number of people to migrate from their homesteads to other places in recent years. The affected people generally migrate to nearby towns and cities, and many never return.

According to a 2013 joint study conducted by the Refugee and Migratory Movements Research Unit (RMMRU), Dhaka University and the Sussex Centre for Migration Research (SCMR), University of Sussex, riverbank erosion displaces 50,000 to 200,000 people in Bangladesh each year.

Eminent climate change expert Dr Atiq Rahman predicted that about 20 million people will be displaced in the country, inundating a huge amount of coastal land, if the global sea level rises by one metre.

The fifth assessment of the Intergovernmental Panel on Climate Change (IPCC) made a similar prediction, saying that sea levels could rise from 26cm – 98cm by 2100, depending on global emissions levels. If this occurs, Bangladesh will lose 17.5 percent of its total landmass of 147,570 square kilometers, and about 31.5 million people will be displaced.

“The climate-induced migrants will rush to major cities like Dhaka in the coming days, increasing the rate of urban poverty since they will not get work in small townships,” urban planner Dr. Md. Maksudur Rahman told IPS.

Dr. Rahman, a professor at Dhaka University, said the influx of internal climate migrants will present a major challenge to the government’s plan to build climate-resilient cities.

Bangladesh is a disaster-prone country. Floods also hits the country each year. The Ganges, Brahmaputra and Meghna river basin is one of the most flood-prone areas in the world. Official data shows that the devastating 1998 flood alone caused 1,100 deaths and rendered 30 million people homeless.

“About 3.5 lakh [350,000] people migrated internally after Aila hit. Many climate victims are going to abroad. So the government is considering the issue seriously. It has planned to rehabilitate them within the areas where they wish to live,” he said.

Noting that the Bangladeshi displaced are innocent victims of global climate change, Kamal stressed the need to raise the issue at the World Humanitarian Summit in Istanbul on May 23-24 and to seek compensation.