When Emergencies Last for Decades 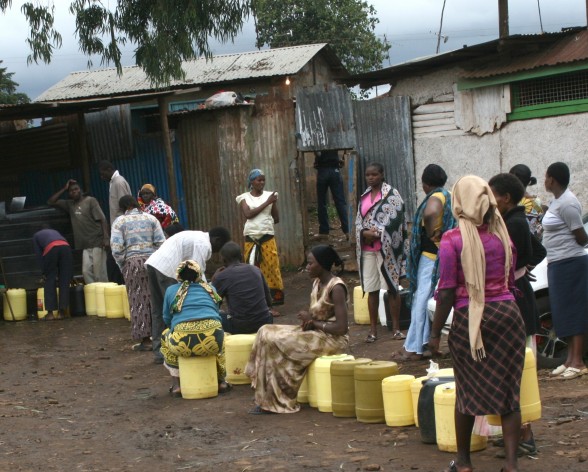 UNITED NATIONS, May 20 2016 (IPS) - For the millions of people whose lives have been uprooted by conflict and natural disasters the average amount of time before they can return home is now 17 years.

Yet often the assistance provided to people living in these crisis situations is designed to only meet their short-term needs.

They may receive food, water and a roof other their heads, but the children are not in school, and the parents can’t find a job.

It’s a problem which United Nations Education Envoy Gordon Brown says has created a “lost generation” who have never seen the inside of a classroom.

“At present, education falls through the gap because humanitarian aid goes to food and shelter,” Brown told journalists here Monday.

By contrast, said Brown, development aid, which traditionally addresses issues such as health and education “is long term and not geared to an emergency.”

“Whether it’s called development funding or humanitarian funding to me is immaterial, as long as we are addressing the neediest people in these situations," Christina Bennett, ODI.

Brown says that a new education fund, which will be launched at the World Humanitarian Summit next week, “will be the first to bridge the gap between humanitarian aid and development aid.”

Aid programs have traditionally been divided between humanitarian assistance — an emergency response when disaster strikes — and development assistance — which takes a longer term and more holistic approach.

Bridging the gap between humanitarian and development aid programs is one of the issues on the agenda at the WHS to be held in Istanbul, Turkey next week.

“Whether it’s called development funding or humanitarian funding to me is immaterial. As long as we are addressing the neediest people in these situations in order for them to lead productive lives and for the countries themselves to be able to achieve the Sustainable Development Goals and get back on the track to growth and out of poverty,” Christina Bennett, a Research Fellow at the UK-based Overseas Development Institute told IPS.

However Bennett noted that the humanitarian sector does need to adapt to the fact that crises are lasting longer.

“We’ve got crises lasting 5, 10, 15 years and you’ve got humanitarian aid workers being deployed on 3 month, 6 month, year long contracts, and humanitarian funds being allocated on an annual and sometimes only semi-annual basis,” she said.

“What you’re seeing is humanitarians doing work for decades but not necessarily having the capacity or the resources to be able to do a good job,” she said, noting that the reduced capacity is due to the structural limitations of the humanitarian aid system.

One important proposal on the table at the WHS is the so-called Grand Bargain. It proposes that the largest humanitarian organisations will be offered more flexible and longer term funding in return for greater transparency and accountability.

Another significant suggestion made by the report was that official development assistance (ODA), a technical term for aid given by rich countries to poorer countries, should be redirected to situations of fragility – meaning places where people are or have recently been affected by conflicts or disasters.

“Because development is the best resilience-builder of all, the panel believes that the world’s scarce resources of official development assistance (ODA) should be used where it matters most – in situations of fragility,” the report stated.

The proposal represents a possible shift of development funding away from poorer countries towards countries in crisis situations. However, there is often an overlap between the two, in part because poorer countries usually don’t recover from disasters as quickly and easily as richer countries.

There may be some evidence to support the shift as well, with indications that countries in crisis are lagging behind poorer countries in at least some areas of health and education.

According to research published by development organisation Save the Children last year, the highest rates of maternal and infant mortality are in countries that are at high risk of conflict, or particularly vulnerable to the effects of natural disasters.

Gains made in health and education in poorer countries can also be set back by natural disasters. These natural disasters include droughts, which will become more severe and frequent as the climate changes.

Scribner says that Oxfam provides both development and humanitarian aid, and supports moves to improve coordination between the two separate fields.

However both Scribner and Bennett noted that humanitarian and development aid workers are only one small part of a much bigger picture.

Governments and local organisations have the most important role to play in responding to and preparing for disasters, and humanitarian organisations are often most needed when governments either aren’t able or willing to meet these needs.

Oxfam America is supporting new legislation in the United States (US) which would require USAID – the US government aid program – to provide development funding directly to local organisations and governments for disaster prevention and preparedness.

The legislation reflects the need for an increase in funding for disaster prevention and preparedness as well as the fact that local governments and organisations are best place to respond to disasters.