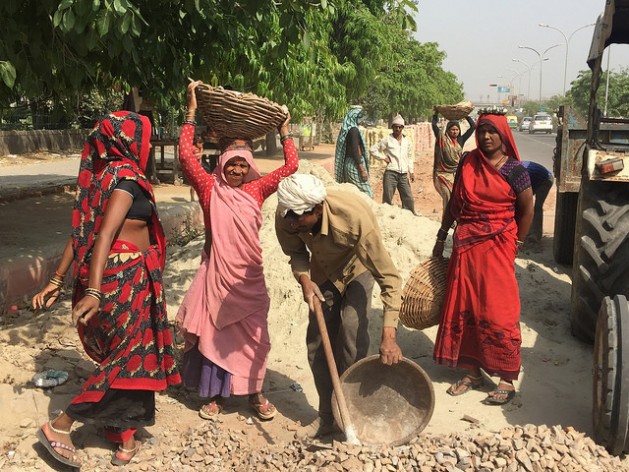 Many Bangladeshi migrants and those from coastal Indian towns take up menial jobs in the construction industry and live in slums. Credit: Neeta Lal/IPS

NEW DELHI, May 19 2016 (IPS) - After the sea swallowed up her home and family in the Bangladeshi coastal district of Bhola along the Bay of Bengal, farmer Sanjeela Sheikh was heartbroken. Stripped of all her belongings, her fields swamped and her loved ones dead, she contemplated suicide.

But good sense prevailed. The frail 36-year-old decided to till her neighbours’ fields in exchange for food. At the same time, she started saving and planning to migrate to India for better prospects like some of her neighbours. Finally, Sheikh packed her belongings and boarded a rickety bus to India’s eastern state of West Bengal. From there, a ticketless train journey brought her to New Delhi where she now lives and works.

“I’ve accepted my fate,” Sheikh told IPS, now employed as a domestic help and living with an Indian family. “There’s no future for me in Bangladesh.”

Along with India, China, Indonesia and the Philippines, Bangladesh is considered one of the world’s most vulnerable countries to climate change in South Asia. Bangladesh’s Prime Minister Sheikh Hasina acknowledged in a speech last year that roughly 30 million Bangladeshis will risk becoming climate migrants by 2050.

"We're petrified of the authorities probing our Bangladeshi antecedents. We can be packed off without any questions. But that's a risk we're willing to take."

The reasons for migration are familiar — climate change, loss of livelihood due to disasters like cyclones, drought, ingress of the sea, and lack of fresh water for agriculture. In its report Climate Change and Migration in Asia and the Pacific, the Asian Development Bank (ADB) has highlighted grave causes and ramifications of climate-induced displacement. As per ADB, roughly 37 million people from India, 22 million from China and 21 million from Indonesia will be at risk from sea levels rising by 2050.

Changing weather patterns will also impact agriculture, hampering millions of livelihoods around the world, especially of poor and marginalised populations, add experts. Cyclone Phailin, which lashed the coastal Indian state of Orissa in October 2013, has triggered large-scale migration of fishing communities. Ditto the floods of 2013 in the Himalayas, which have wrecked millions of livelihoods forcing people to move elsewhere.

However, among the most daunting effects of climate change is human displacement as it involves migration, protection of vulnerable people and liability for climate change damage. The U.S. Department of Defence has rightly called climate change “an urgent and growing threat to our national security, contributing to increased natural disasters, refugee flows, and conflicts over basic resources such as food and water.”

These words ring all the more true when viewed against the ominous backdrop of the increasing frequency and severity of natural disasters. These catastrophes are exposing millions of vulnerable people like Sanjeela to largescale displacement and forced migration. According to the Geneva-based Internal Displacement Monitoring Center, at least 19.3 million people worldwide were forced out of their homes by natural disasters in 2015 – 90 percent of which were related to weather-related events.

Unfortunately, even as the numbers of these “climate refugees” crossing international borders in search of a safe haven has seen a dramatic upward spiral, the issue of legal rights or guaranteed help remains elusive for them.

“Despite being forced to leave their home countries, these migrants cannot apply for refugee status. They are bereft of legal protection under the U.N. High Convention for Refugees and can be deported at any time without question,” a senior official at the Ministry of External Affairs told IPS.

Zahida Begum, 45, is one such refugee who lives in constant fear of being deported. The poor farmer migrated from Bangladesh in 2014 when her fields were wrecked by floods. She now lives in India’s northern state of Uttar Pradesh with her three young children and husband. “When we’d just shifted,” Begum told IPS, “we used to spend entire days hiding. Now, we just pretend we’re from the Indian state of West Bengal as we speak the same language and our cultures are also quite similar. However, we’re petrified of the authorities probing our Bangladeshi antecedents. We can be packed off without any questions. But that’s a risk we’re willing to take.”

Researchers in Assam in India and in Bangladesh have estimated that around a million people have been rendered homeless due to erosion in the Brahmaputra river basin over the last three decades. Particularly susceptible to climate change are the Sundarbans, a low-lying delta region in the Bay of Bengal where some 13 million impoverished Indians and Bangladeshis live.

The 200-odd islands here constitute the world’s largest mangrove estuary shared by India and Bangladesh which has experienced loss of forests, lands and habitats due to rising sea levels in recent years.

Climatologists say seas are rising in the Sundarbans more than twice as fast as the global average due to which much of the delta could be submerged in as early as two decades. “That catastrophe,” says Dr. Abhinav Mohapatra of the Indian Meteorological Department, “could trigger a massive exodus of climate refugees creating enormous challenges for India and Bangladesh.”

Sahana Bose of the Central University of Assam states in her essay “Climate resilience and the climate refugees” that the migrant tribes in the Indian Sunderbans, working as agricultural labourers or cultivating small farms, locally known as ‘Adivasis’ are the worst type of climate refugees.

“Their very frequent displacement from one island to another within a span of five years has created a wide range of ecological and socio-economic problems leading to humanitarian crisis. These climate refugees are also the world’s most poor people living on less than 10 US dollar per month,” writes Bose.

A Greenpeace study suggests that India will face major out-migrations from coastal regions. According to these estimates, around 120 million people will be rendered homeless by 2100 in Bangladesh and India.

“Everyone knows that climate change is displacing people but no government is willing to acknowledge this officially for fear of having to recognise these people as refugees and be held responsible for their welfare,” explains Dr. Jamuna Sheshadri, an associate professor of sociology at Delhi University.

The problem is aggravated, says Sheshadri, with the scientific community still struggling to define “climate refugees” even though displacement and migration due to climate are a global phenomenon.

According to the Intergovernmental Panel on Climate Change, sea levels in India are expected to rise at the rate of 2.4 mm a year; in 2050, the total increase will be 38 cm, displacing tens of thousands of people. For nearly a quarter of India’s population living along the coast, global warming is a scary reality.

The issue of climate refugees is also creating simmering tensions at the local level. In West Bengal, the massive and continuous influx of illegal migrants from Bangladesh has become a fraught political issue. Waves of Bangladeshi migrants have settled in the state and the Northeast over the decades. The resultant pressures on land and economic resources is triggering clashes between local residents and the migrant Bangladeshis.

The migrants’ influx is also creating social marginalisation among local Indian populations apart from disguised unemployment, scarcity of land for agriculture and food insecurity. In Delhi, the city slums are experiencing a severe strain on civic services and urban infrastructure including paucity of potable water. Meanwhile, unscrupulous politicians are busy milking both the constituencies — of migrants and locals — to fatten their vote banks.

Where does the solution lie to the complex problem of climate refugees lie? The Norwegian Refugee Council, a prominent humanitarian organisation in Norway that works on global refugee issues, had suggested setting up of an international environmental migration fund bankrolled by industrialised nations. The idea of a UN pact to compensate victims of climate change is another suggestion, and the issue will also be taken up at the World Humanitarian Summit in Istanbul on May 23-24.

But, as some experts have highlighted, the issue first needs to be mainstreamed. A solid plan can then be devised and incorporated in national policies of the affected nations for a lasting and sustainable solution.