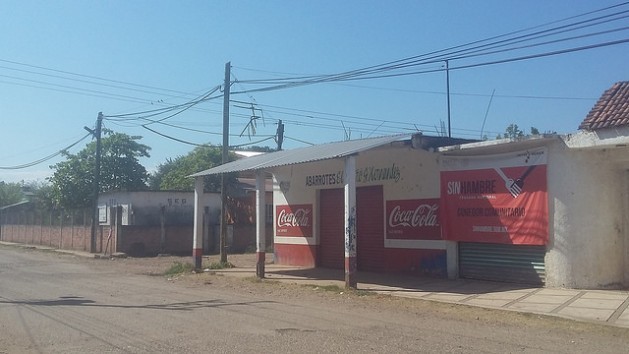 In Mexico there is a trail of ghost towns, where local residents have fled en masse due to the violence of the drug cartels. On empty streets in Santa Ana del Águila, in the municipality of Ajuchitlán del Progreso, Guerrero state, bullet marks can be seen on the walls. Credit: Daniela Pastrana /IPS

MEXICO CITY, May 18 2016 (IPS) - “This is a humanitarian crisis,” said Bertha Zúñiga Cáceres, referring to the generalised violence in Mexico and in Honduras and other countries of Central America, which has claimed hundreds of thousands of lives and is a product of transnational crime, but is invisible to the international community.

Zúñiga Cáceres, the daughter of indigenous environmental activist Berta Cáceres, who was murdered on Mar. 2, is in Mexico after visiting several European cities to ask for help clarifying her mother’s murder and to call for a cancellation of the financing for the Agua Zarca hydroelectric project, to which the Lenca indigenous people are opposed.

In an interview with IPS she admitted that despite the death threats and the murders of other activists, she didn’t believe they would dare kill her mother, who was so well-known at an international level.

“You don’t hear bombs here (like in the Middle East, for example), but blood is shed, there are killings, many killings. It’s a situation that has to be urgently addressed by the United Nations agencies, especially the UNHCR (the refugee agency).” -- Rubén Figueroa

She herself and her siblings had fled to Mexico due to the threats against members of the Civic Council of Popular and Indigenous Organisations of Honduras (COPINH), which was founded by Cáceres 23 years ago. She had been studying in Mexico for a month when her mother was killed.

Now she wants to tell the world about communities that are displaced and forced off their land because of a “neoliberal, racist and patriarchal” system.

The victims, she said, are not only the Lenca Indians. Also affected are the Garifunas, mixed-race descendants of native people and African slaves, who have been displaced by the construction of tourist resorts in their coastal territory.

To that is added abuse by the police and other agents of the state, since the 2009 coup d’etat that overthrew President Manuel Zelaya, mixed with criminal violence that has forced thousands of people to seek refuge outside of Honduras.

Rubén Figueroa, coordinator of the Mesoamerican Migrant Movement, which has organised 11 caravans of Central American mothers searching for their children who have gone missing in Mexico, concurs with Zúñiga Cáceres.

“The situation in the entire Northern Triangle region of Central America (El Salvador, Guatemala, and Honduras) is a humanitarian crisis,” the migrants’ rights activist told IPS.

“You don’t hear bombs here (like in the Middle East, for example), but blood is shed, there are killings, many killings. It’s a situation that has to be urgently addressed by the United Nations agencies, especially the UNHCR (the refugee agency),” he said.

Figures from an invisible crisis

According to the 2016 Global Report on Internal Displacement, published this month by the Internal Displacement Monitoring Centre (IDMC), the number of internally displaced people forced from their homes by armed conflict and violence rose to a record 40.8 million in 2015.

Of that total, at least 7.3 million were in Latin America, most of them in Colombia, because of its decades-long armed conflict.

But the report dedicates a special analysis to the growing new phenomenon of displacement caused by criminal violence, in Mexico, El Salvador, Guatemala and Honduras. 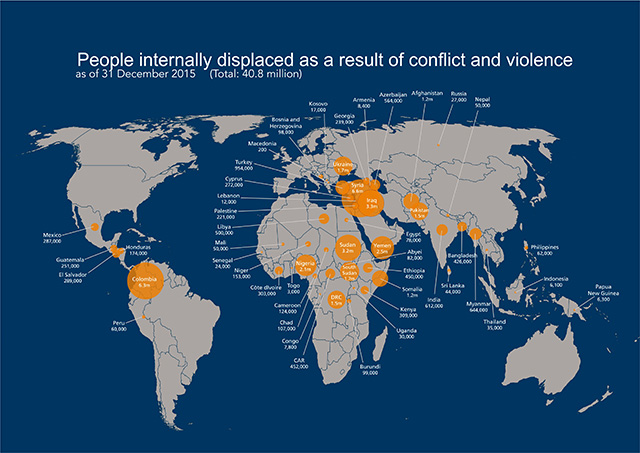 El Salvador, Guatemala, Honduras and Mexico now stand out on the global map of internal displacement because of the victims of criminal violence, a phenomenon that is invisible and ignored by international humanitarian assistance agencies. Credit: IDMC 2016 report

These four countries accounted for a total of one million internally displaced persons – nearly double the number reported in the 2014 edition of the report. They are mainly victims of criminal violence, principally associated with drug trafficking and gangs.

The IDMC stresses that these are incomplete figures, to which must be added the number of people who are forced to leave the country by criminal violence.

It describes those displaced by criminal violence as “unseen and in displacement limbo”.

Human rights activists in Mexico blame this generalised violence on the war between organised crime groups, as well as on violence by the states against opponents to mining and energy projects.

“What we are experiencing is not a war on drug trafficking, but a war by the state against the general population,” María Herrera, an activist with the group of relatives searching for family members forcibly disappeared in Mexico, who number in the thousands, told IPS.

Also part of this new kind of humanitarian emergency, arising from transnational crime, are civilian victims of the growing militarisation in countries of Central America and Mexico, according to those interviewed by IPS, who complain that the issue is not on the agenda for the World Humanitarian Summit to be held May 23-24 in Istanbul.

Figueroa said a series of regional policies, such as Mexico’s Southern Border Plan and the Alliance for Progress in Central America, were partly to blame for the crisis.

“Approximately five years ago we began to notice that displacement is caused by more direct violence. We have seen young people who come to the shelters with bullets in their bodies. People who have returned to their countries and have been killed,” the activist said.

The Beast, the train that undocumented migrants from Central America ride on its way across Mexico, heading for the United States, stopped in Hidalgo in the centre of the country, in a photo from the IDMC 2016 report. Migrants hitching a ride on the train face the risk of being robbed, assaulted, raped and even killed by gangs and organised crime. Credit: Keith Dannemiller/OM

“Migration has always existed, but now people are being displaced by drug trafficking and gang warfare, and there is also the question of persecution and harassment of activists and human rights defenders in Honduras. It’s become structural violence,” he said.

Mexico between a rock and a hard place

The governmental Mexican Commission for Aid to Refugees (COMAR) reports that 2,000 Central Americans requested refugee status in 2014, and only one-fifth were granted it.

Mexico, meanwhile, has its own humanitarian emergency. The Mexican Commission of Defence and Promotion of Human Rights (CMDPDH) documented 281,400 cases of forced displacement caused by generalised violence between 2011 and February 2015.

One-third of these displaced persons fled their communities in 141 mass displacements in 14 states.

Mass displacement is defined as an event simultaneously affecting more than 50 people or 10 families. Between January 2014 and February 2015, the CMDPDH registered 23 mass displacements.

One-fifth of these happened in Guerrero, a state that doubled its record and became the leader in forced displacement due to violence in Mexico in the last year.

“People who have been internally displaced do not have mechanisms or institutions for their protection or assistance,” says the report Forced Displacement in Mexico, released by the CMDPDH, a government agency, in 2015.

But there are other cases, like that of Myrna Lazcano, a Mexican woman who, after marrying and having two daughters in the United States, decided to return to Mexico in 2008.

However, the violence against women in her home state of Puebla and in Veracruz, where she found work, forced her to send her daughters back, first, and then return herself to the United States, where she has requested asylum.

Like her, another 9,200 Mexicans applied for asylum in the United States in 2012 – three times the number of requests filed there by Mexicans in 2008.

“This is an emergency that no one wants to address,” said Figueroa. “It is influenced by the position, especially on the part of the United States, with regard to the situation in Central America, because they would be forced to offer refuge if they recognised it.”

But in his view, “another element is the stance taken by Mexico and the countries of origin (of the migrants), because they would be forced to admit that they are failing, as is the international community.”