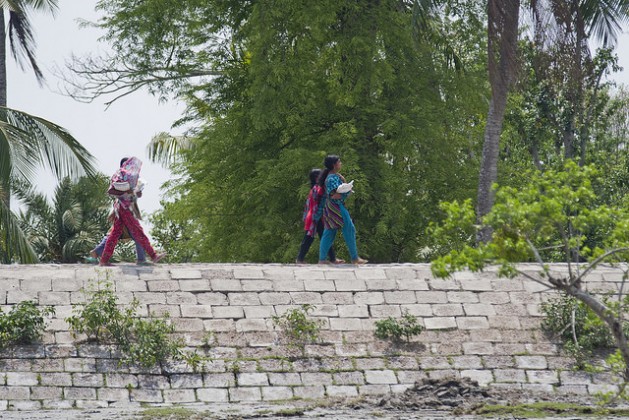 Girls walk across an embankment in the Satkhira district of Bangladesh. The height of the polders needs to be increased to save coastal populations from storm surges and cyclones. Credit: Rafiqul Islam/IPS

DHAKA, Bangladesh, May 12 2016 (IPS) - Facing the bleak prospect of millions of its citizens being displaced in coming years due to storms and sea level rise caused by climate change, Bangladesh is building up existing coastal embankments in a bid to protect coastal lands and people.

According BWDB officials, the water development board has already started redesign work on coastal embankments. And as per the agreement, the Chinese firm is helping rebuild four polders in two coastal districts – Khulna and Bagerhat.

Bangladesh is a low-lying delta, making it one of the most vulnerable countries to climate change. The coastal region adjoining the Bay of Bengal is characterised by a vast network of morphologically active tidal rivers. The strength of the tides and the flatness of the delta causes the tides to influence river processes a long way upstream in the southern estuaries. And climate change has intensified the tides in recent years.

"If such a cyclone [like Aila] hits the coastal region again, there is no doubt that old embankments will break down and coastal land will go under seawater.” -- villager Lipi Akhter of Shura-6

He said the water development board is currently working to rebuild 17 coastal embankments in its first phase, and the remaining polders will be repaired gradually.

Last January, the water development board initiated the Coastal Embankment Improvement Project Phase-1 (CEIP-1) involving 400 million dollars to rebuild 17 polders in six coastal districts – Khulna, Satkhira, Begerhat, Pirojpur, Barguna and Patuakhali. The height of 200-kilometre-long embankments will be increased by one to two metres and 58 regulators will be set up in the first phase.

Since the 1960s, Bangladesh built 139 polders to protect about 1.2 million hectares of land from seawater to bring the land under permanent agriculture within the coastal embankments. The coastal polders were originally designed to protect the arable land from high tides and salinity intrusion.

The 60-year-old polders are now under threat of recurrent storm surges and cyclones induced by climate change. Two major cyclones – Sidr in 2007 and Aila in 2009 – brought substantial damage to the coastal embankments, putting the lives and property of coastal people at risk.

Lipi Akhter of Shura-6 under Shyamnagar Upazila in Satkhira was hit hard by Aila, which killed some 200 people in Bangladesh.

“The only cyclone – Aila – that hit the country in 2009 destroyed most of the freshwater sources and arable land in Shyamnagar Upazila, accelerating our plight,” she told IPS. “If such a cyclone hits the coastal region again, there is no doubt that old embankments will break down and coastal land will go under seawater.”

Eminent water expert Prof. Ainun Nishat of BRAC University told IPS that the intensity of extreme climatic events is now much higher than the past, which makes the coastal polders even more vulnerable, apart from sea level rise caused by melting glaciers.

The coastal embankments constructed in 1960s have already lost their capacity to resist the higher-intensity-tidal surges and cyclones, he said, adding that there is no alternative to rebuilding of coastal polders to save the coastal region in Bangladesh.

The coastal embankments currently play a vital role in protecting the region from climatic events, boosting agricultural outputs, improving livelihoods of the coastal people, and coping with climate change impacts. But the arable lands located within the polders are only slightly higher than sea level.

Without embankments, the coastal communities will be subject to tidal fluctuations. But a huge amount of money is needed to redesign and repair the coastal polders. According to the BWDB, about two billion dollars is required to fortify the coastal embankments to withstand natural disasters, including cyclone and storm surge, due to climate change.

Dr. Atiq Rahman, executive director of the Bangladesh Centre for Advanced Studies (BCAS), says rebuilding the coastal polders and maintenance of these polders will be major challenges for Bangladesh in addressing growing climatic hazards to protect its coastal population.

According to a study by the Dhaka-based Centre for Environmental and Geographical and Information Services (CEGIS), about one billion tonnes of silt flow through the river channels of the country every year into the Bay of Bengal. So siltation of peripheral rivers surrounding the embankments causes water-logging, which affects the polders. Poor maintenance of the polders also contributes to internal drainage congestion and heavy external siltation.

Rahman said proper modelling of embankments and experiences of the local community must be used in rebuilding coastal polders to make them climate resilient and keep the coastal rivers free from siltation.

Sea levels could rise by 26 cm to 98 cm in Bangladesh by 2100, depending on global emission levels. If this occurs, the country will lose a vast amount of costal lands, says the fifth assessment of the Intergovernmental Panel on Climate Change (IPCC).

According to a study by local NGO Unnyan Onneshan in 2012, sea level will rise by one meter in the coastal region of Bangladesh by 2100, affecting 25,000 square kilometres of land (17.5 percent of total landmass) and displacing 31.5 million people.