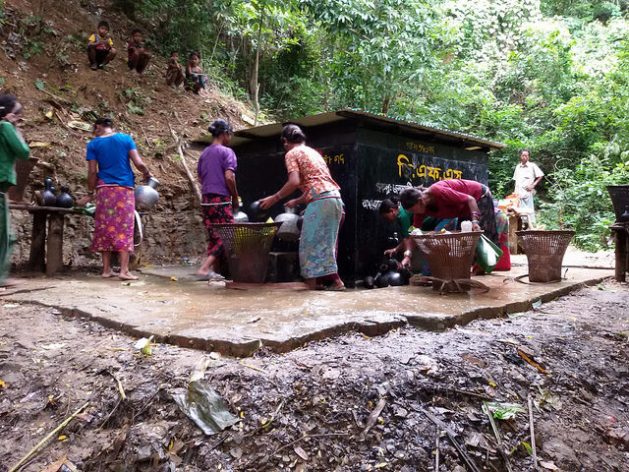 DHAKA, Aug 1 2017 (IPS) - Experts and policymakers here say regional cooperation is a must to resolve long-standing water problems in South Asian countries like Bangladesh, Bhutan, China, India and Nepal, and to harness the full value of water.

There are many transboundary rivers, including the Ganges, Brahmaputra and Meghna, in the region. Bangladesh in particular faces severe water problems, like flooding and riverbank erosion, due in part to a lack of cooperation with its neighbors, officials said at a consultation in the capital Dhaka.

On July 31, state ministers, senior and government officials, businesses and representatives from non-governmental organisations (NGOs) and development partners gathered at the Fourth Consultation of the UN High Level Panel on Water (HLPW) on Valuing Water at the BRAC Center Inn.

Bangladesh has 57 transboundary rivers, and 93 percent of its catchment is located outside the country’s borders.

Muhammad Nazrul Islam, State Minister of Bangladesh for Water Resources, said some countries have adequate water sources from upstream lakes and glaciers and think of water as their own resource, but water should be universal and all should have equitable access to it.

Highlighting various water-related problems Bangladesh has long been facing, he said, “When we get too much water during monsoon [season], then we hardly can manage or conserve water. But during the dry season, we face severe water scarcity.”

“Basin-based water management is urgent in South Asia to manage water of common rivers and to cope with water-related problems in the region,” said Abu Saleh Khan, a deputy executive director of the Dhaka-based think tank, Institute of Water Modelling (IWM).

With just 3 percent of the world’s land, South Asia has about a quarter of the world’s population. Rice and wheat, the staple foods in the subregion, require huge amounts of water and energy, even as water resources are coming under increasing strain from climate change, pollution and other sources. 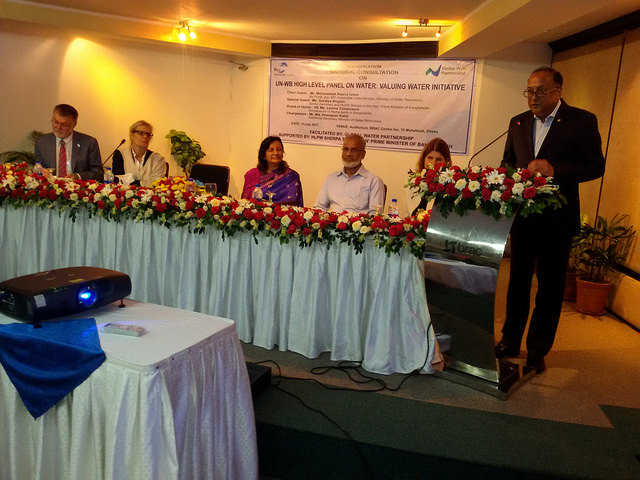 The goal of the Valuing Water Initiative is to achieve the water-related Sustainable Development Goals (SDGs) by inspiring better decision-making, and making better trade-offs between competing claims on water.

Today, freshwater is facing a crisis around the world, compounded by extreme weather events, droughts and floods. Water sources are threatened by overuse, pollution and climate change. But water is essential for human health, food security, energy supplies, sustaining cities, biodiversity and the environment.

“’We never know the worth of water until the well is dry’ is a saying in several different languages from around the world. And indeed, water is often taken for granted. That is why the High Level Panel on Water launched the Valuing Water Initiative last year,” said Netherlands Ambassador in Dhaka Leonie Cuelenaere.

She said water is a key element of Bangladesh’s culture and economy, but its 700 rivers frequently flood and create problems for local communities.

“Yet simultaneously, a shortage of fresh water occurs in the dry season. So valuing water – socially, culturally, economically and environmentally – is crucial here,” said Cuelenaere.

Regarding excessive use of water, Nazrul Islam noted that about 3,000 litres of water is required to irrigate one kilogram of paddy in Bangladesh.

“We have to change our lifestyle to cut water use, and need to innovate new varieties of crops which could be cultivated with a small volume of water,” he added.

Suraiya Begum, Senior Secretary and HLPW Sherpa to the Prime Minister of Bangladesh, said about 90 percent of Bangladesh’s people think that they have enough water, but some pockets in the country still face scarcity every year.

Focusing on Bangladesh’s strong commitment to conserve water and environment, she said Bangladesh’s Prime Minister Sheikh Hasina considers water a precious resource and advocates for its wiser use.

Valuing water can make the cost of pollution and waste apparent and promote greater efficiency and better practices.

Willem Mak, a project manager (valuing water) of the Netherlands government, said pricing of water is not synonymous with its true value, but is one way of covering costs, reflecting part of the value of these uses, ensuring adequate resources and finance for related infrastructure services.

He said valuing water can play a role in peace processes via transboundary water management or mitigation.

Dr Khondaker Azharul Haq, the president of Bangladesh Water Partnership, said water has many values – economic, social, cultural and even religious – while the values of water depend on its quality and quantity, and time and dimension.

“Rather than [only] economic value,” he said, “water has some values that you cannot count in dollars, particularly water for environmental conservation.”

The main objective of the July 31 water consultation was to obtain views from a wide array of country-level stakeholders on the proposals from the HLPW on the valuing water preamble and principles.

The water meet also encouraged governments, business and civil society to consider water’s multiple values and to guide the transparent incorporation of these values into decision-making by policymakers, communities, and businesses.